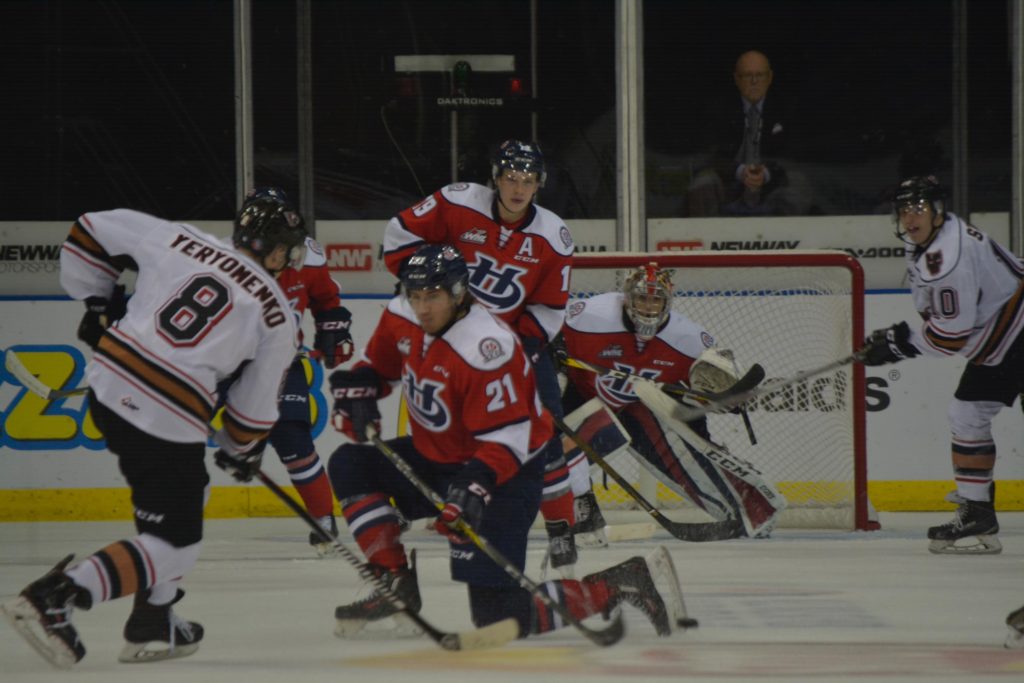 Lethbridge, AB – The Lethbridge Hurricanes continued their three game home-stand on Saturday night with a 4-0 victory over the Calgary Hitmen in front of 3,247 fans at the ENMAX Centre.

Ryley Lindgren continued his hot hand with a pair of goals while Tyler Wong made an immediate impact scoring a goal and two assists in his season debut. Stuart Skinner made 34 saves for his fifth career shutout.

It was a fast-flowing first period as the ‘Canes and Hitmen traded chances. The ‘Canes got on the board at the 14:51 mark as Jesse Zaharichuk, who had four points on Friday, fed a pass across to Lindgren on a two-on-one and the overage forward beat Calgary goaltender Cody Porter high over the glove to make it 1-0. Hurricanes outshot the Hitmen 8-5 in the opening period.

The Hurricanes added to their lead in the second period as they netted two more. Egor Babenko scored for the second straight night potting his second of the season at the 3:49 mark as he was set up on the doorstep by Colton Kroeker – Wong earned the second helper as the ‘Canes increased their lead to 2-0. With just 1:09 left in the middle frame, the ‘Canes made it 3-0 when Lindgren tipped home his second of the night and fourth of the season on the power play – Brayden Burke and Wong earned the helpers. Hurricanes outshot the Hitmen 13-7 in the second.

In the third, the Hitmen pushed to try and solve Skinner who was on his A-game. It was a chess match of a third period that didn’t result in many great opportunities for either side. With under four minutes left, the Hurricanes were assessed a penalty. On the ensuing power play, the Hitmen pulled their goaltender only to see Wong intercept a cross-ice pass, skate up ice on a breakaway and bury his first of the season into the empty net to make it 4-0.

The Hurricanes victory improves their record to 3-1-0-0 on the year and 3-0-0-0 on home ice. The ‘Canes have now won 31 of their last 39 regular season home contests. The ‘Canes are back in action on Wednesday when they welcome the Kelowna Rockets at the ENMAX Centre.