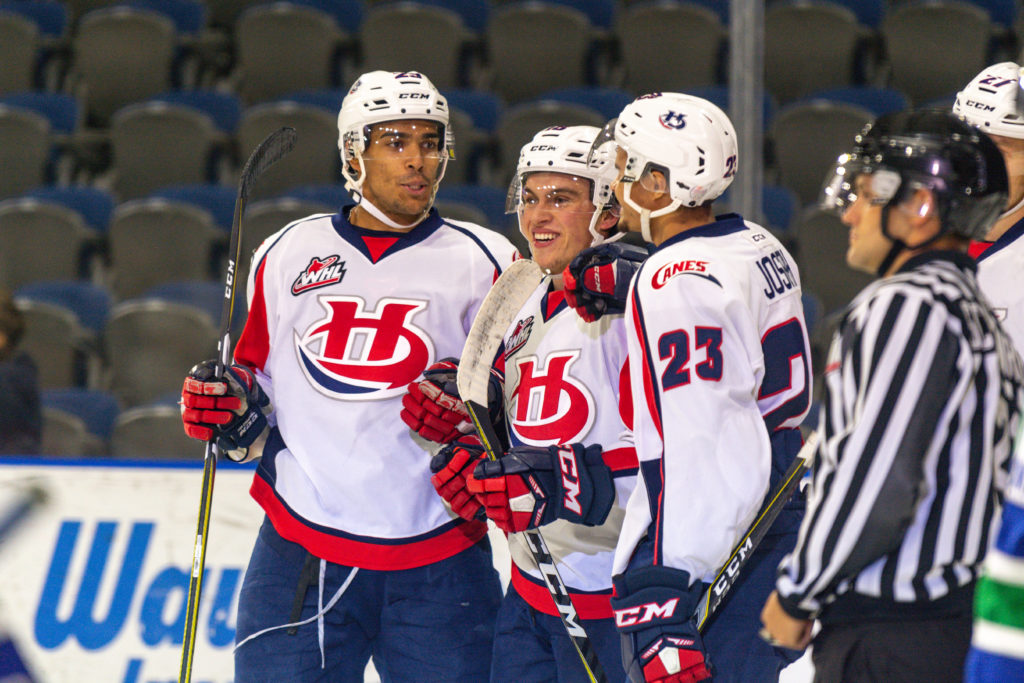 Lethbridge, AB – The Lethbridge Hurricanes continued their ENMAX Pre-Season Friday night with a 7-0 victory over the Swift Current Broncos at the ENMAX Centre.

The Hurricanes opened the scoring early in the first period as Keltie Jeri-Leon snapped home his second of the pre-season just 2:24 into the game to make it 1-0; Logan Barlage and Danila Palivko earned the assists on the goal. The ‘Canes struck again at the 15:51 mark as Jeri-Leon potted his second of the period, and third of the pre-season, to make it 2-0; Barlage was credited with the lone helper. The Hurricanes outshot the Broncos 16-5 in the first period.

In the second, it didn’t take long for the ‘Canes to strike again as Jeri-Leon completed the hat-trick just one minute into the period with a power play goal; Jake Elmer and Koletrane Wilson picked up the assists. The ‘Canes made it 4-0 late in the period as Barlage one-timed his second of pre-season play with 1:09 left in the middle frame; Jeri-Leon and Hayden Clayton were handed the assists on the goal to make it 4-0. The ‘Canes held the shot advantage 17-3 in the second period.

The Hurricanes continued to pepper the Broncos as they made it a 5-0 lead as Dylan Cozens scored his first of two in the third period by blowing by the defenseman before lifting one over the blocker of Swift Current’s Isaac Poulter at the 11:22 mark. Cozens added another on the power play with 2:58 mark to make it 6-0. Jeri-Leon netted his fourth of the night just 13 seconds later to make it a 7-0 final.

The Hurricanes outshot the Broncos 49-18 in the game. Lethbridge went 2/4 on the power play while the Broncos were 0/4 with the extra man.

Reece Klassen, who made the start for the Hurricanes, made 18 saves for the shutout as he improves to 2-0-0-0 in the exhibition season.

The Hurricanes will conclude the ENMAX Pre-Season Saturday in Swift Current. The ‘Canes will begin the WHL regular season Friday, September 21st when they welcome the Medicine Hat Tigers. Tickets are available online, by calling 403-329-SEAT (7328) or by visiting the ENMAX Centre Ticket Centre.