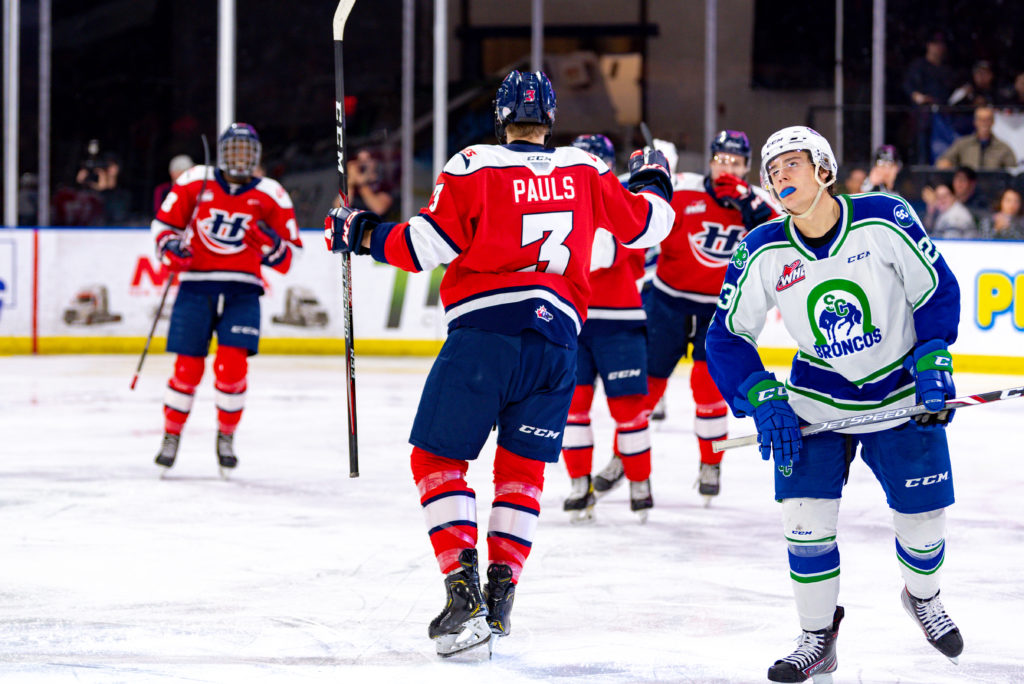 Lethbridge, AB – The Lethbridge Hurricanes began a two-game homestand on Saturday with a 7-2 victory over the Swift Current Broncos at the ENMAX Centre.

The Hurricanes had a great start to the game as they jumped out to an early lead just 3:38 into the game. While shorthanded, Koletrane Wilson was sprung free on a breakaway and ripped home his fifth goal of the season to make it 1-0 on the Hurricanes league-leading 10th shorthanded goal this season. Zack Stringer struck, also on a breakaway, at the 7:16 mark to make it 2-0 Lethbridge early. The ‘Canes added a third first period goal when Chase Wheatcroft redirected home his fifth goal of the season as the ‘Canes led 3-0 after one period. Lethbridge outshot Swift Current 12-3 in the first period as the Broncos didn’t get their first shot on goal until the 15:14 mark of the opening frame.

The teams traded four goals in the second period as the Broncos got on the board when Jaxan Kaluski beat Bryan Thomson for his 10th of the season to make it a 3-1 game. Lethbridge answered back when affiliate player Chase Pauls scored his first WHL goal with a shot from the blueline to make it a 4-1 game; Pauls became the 10th ‘Cane this year to score his first in the league. Swift Current tallied again on a breakaway as Justin Svenson ripped one high over the glove of Thomson to make it 4-2. After hitting a crossbar in the first period, Brett Davis scored his first of two goals in the goal on a power play on a one-timer to make it 5-2 for the Hurricanes after forty minutes of play.

The ‘Canes added two more goals in the third period to round out the scoring. In the opening minute, Oliver Okuliar fed it to Davis on a two-on-one and the overage forward was able to deke to the back-hand and beat Isaac Poulter to make it 6-2. Logan Barlage finished the scoring matching his previous career-high with his 15th goal of the season at the 12:34 mark to make it a 7-2 final for the Hurricanes.

Final shots favoured the Hurricanes 34-21 in the game. The ‘Canes went 1/4 on the power play while the Broncos were 0/2 with the extra man.

The Hurricanes play their final home game in January next Friday when they welcome the Red Deer Rebels to the ENMAX Centre at 7:00pm. Tickets can be purchased online at www.enmaxcentre.ca, by calling 403-329-SEAT (7328) or by visiting the ENMAX Centre Ticket Centre.