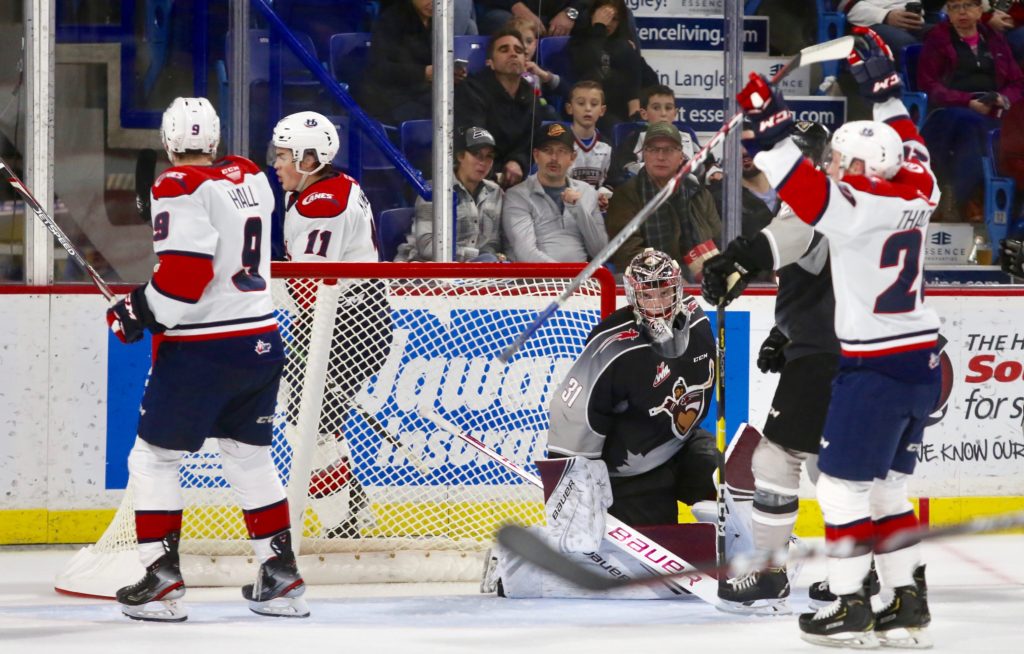 Vancouver, BC – The Lethbridge Hurricanes ended a two-game BC Division road trip on Sunday with a convincing 6-0 win at the Langley Events Centre against the Vancouver Giants.

The Hurricanes had a strong first period as they outshot the Giants 12-4 in the opening period. Neither team was able to find the back of the net in the first stanza. Lethbridge had the best scoring chance on a power play when Langley-product Alex Cotton rang a slapshot off the goal post on a power play but Giants goalie Trent Miner stopped all 12 shots he saw while Carl Tetachuk turned aside all four he faced in the period.

Lethbridge opened the scoring just 3:06 into the second period when Zack Stringer beat Miner with a backhand shot for his second goal of the season to make it 1-0; Calen Addison earned the assist on the goal. Just 1:50 later, the Hurricanes added another as Giants defenseman Dylan Plouffe stumbled leaving the puck in front of the Vancouver goal and Jett Jones was able to chip one home to quickly make it 2-0. Dino Kambeitz scored his seventh goal of the season on a beautiful move before snapping one five-hole to make it 3-0 after forty minutes of play. The Hurricanes outshot the Giants 24-11 through two periods.

In the third period, the Hurricanes added to their lead as Oliver Okuliar scored his league-leading 17th goal of the season at the 5:19 mark to make it 4-0; Justin Hall earned the assist on the goal. ‘Canes made it 5-0 when Logan Barlage potted his fourth goal of the campaign on a rebound of an Addison point shot before Noah Boyko rounded out the scoring with just 16 seconds left in the game to make it a 6-0 final.

Carl Tetachuk stopped all 17 Vancouver shots in the game for his second shutout of the season and fourth career. The ‘Canes peppered 40 shots on goal as they outshot the opposition for the seventh straight contest.

Lethbridge went 1/6 on the power play while Vancouver did not have an opportunity with the extra man.

The victory for the Hurricanes ends a two-game losing streak as they split a pair of games on the west coast. The win improved the ‘Canes road record to 8-3-0-1 on the season while improving their overall record to 14-6-0-3 on the year.

The Hurricanes will end a three-game road trip on Wednesday when they visit the Swift Current Broncos. The ‘Canes will return to the ENMAX Centre on Friday, November 22nd against the Prince Albert Raiders. Tickets can be purchased online at www.enmaxcentre.ca, by calling 403-329-SEAT (7328) or by visiting the ENMAX Centre Ticket Centre.