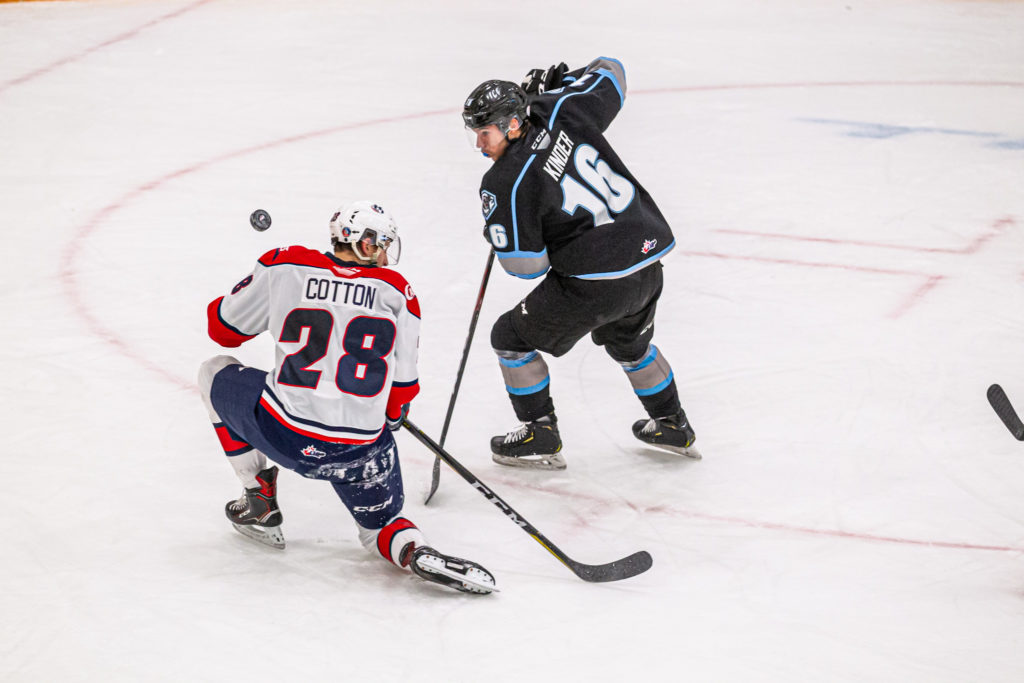 Winnipeg, MB – The Lethbridge Hurricanes bounced back on Friday night with a convincing 8-2 victory in Winnipeg over the ICE at Wayne Fleming Arena as they took three out of a possible four points in the Manitoba capital.

The Hurricanes had a great start to the game as they peppered the ICE goaltender Jesse Makaj early in the game. Despite the strong start to the game it was Winnipeg that struck first when Michal Teply beat Bryan Thomson over the blocker from the high-slot to make it a 1-0 game. Lethbridge answered by just four minutes later as Oliver Okuliar scored his 10th goal of the season on a giveaway before he wired it under the crossbar to make it 1-1. Just 27 seconds after Okuliar tied the game, a point shot by Danila Palivko was redirected twice and past Makaj to give Lethbridge a 2-1 lead with the goal credited to Justin Hall. Hurricanes outshot the ICE 9-7 in the opening period.

It was all Lethbridge in the second period as they struck five times, including two on the power play. Okuliar scored his second of the game with a man advantage just 1:37 into the period before Dylan Cozens beat Makaj on a one-timer from the left circle to make it quickly 4-1 for the Hurricanes. Winnipeg answered back with a goal by Cole Muir to make it 4-2 but the ‘Canes answered right away. Okuliar redirected an Alex Cotton point shot home for his first WHL hat-trick and his WHL-leading 12th goal of the season. The Hurricanes didn’t stop the enslaught as Chase Wheatcroft jammed home his second of the year before Cotton ripped home his fourth goal of the season for his fourth point of the period as Lethbridge led 7-2 after forty minutes of play.

The Hurricanes outshot the ICE 10-5 in the third period and would add to their lead late with their WHL-leading fifth shorthanded goal as D-Jay Jerome scored his fifth goal of the season on a breakaway to make it 8-2 for the ‘Canes; Wheatcroft earned the lone assist on the goal as the ‘Canes set a new season high for goals in a game.

Lethbridge outshot Winnipeg 33-22 in the game while the ‘Canes went 2/2 on the power play and 1/1 on the penalty kill.

The win for the Hurricanes extends their point streak to nine consecutive games as they’ve posted a 7-0-0-2 record in those nine games. The victory improves their road record to 6-2-0-1 and their overall record to 10-4-0-3 on the season.

The Hurricanes will end their three-game road trip on Saturday in Brandon against the Wheat Kings at Westoba Place before returning to the ENMAX Centre on Wednesday, November 6th when they welcome the Swift Current Broncos. Tickets can be purchased online at www.enmaxcentre.ca, by calling 403-329-SEAT (7328) or by visiting the ENMAX Centre Ticket Centre.