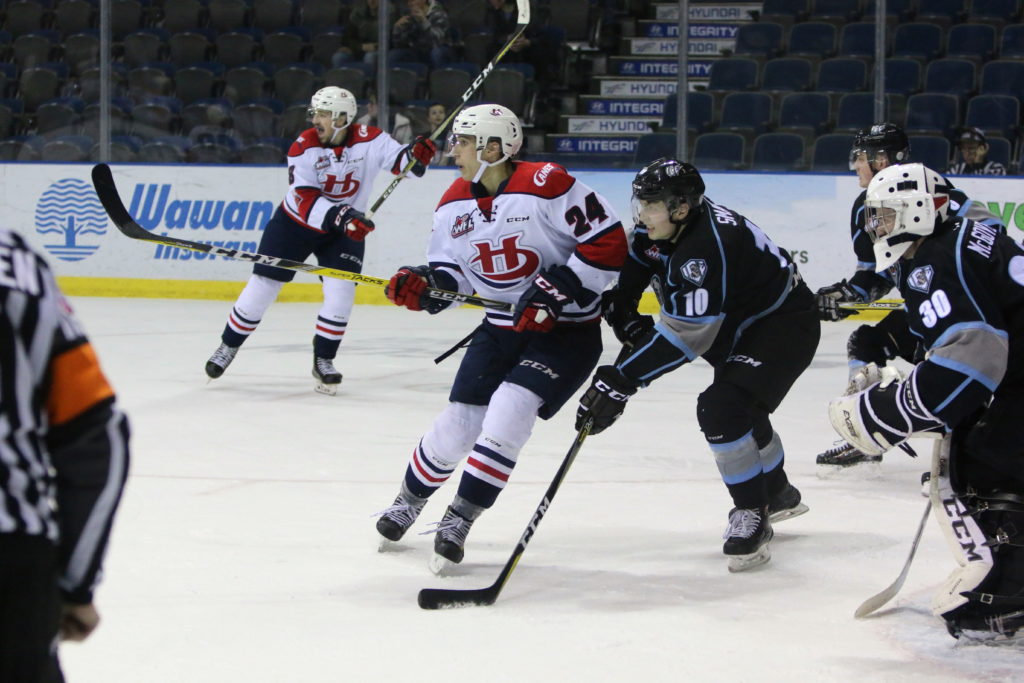 Cranbrook, BC – The Lethbridge Hurricanes continued their three-in-three weekend on Saturday with an 8-4 win in Cranbrook over the Kootenay Ice at Western Financial Place.

Hurricanes goaltender prospect Bryan Thomson made his first WHL start on Saturday after Carl Tetachuk suffered an injury and Reece Klassen under the weather. Thomson, from Moose Jaw, made 33 saves as he earned his first WHL victory.

The Hurricanes had a good start to the game as they struck on a delayed penalty when Nick Henry banged home his 17th goal of the season the 6:27 mark to make it 1-0; Danila Palivko and Jake Leschyshyn earned the assists on the goal. A pair of power play goals by the Ice, one by Bran Ginnell and one by Jaeger White, put Kootenay ahead 2-1 but the Hurricanes answered back. Palivko potted his first WHL goal at the 17:06 mark to start a run of three goals in a span of 2:27. Dylan Cozens redirected an Alex Cotton point shot by Ice starting goaltender Duncan McGovern to make it 3-2 ‘Canes with 1:30 to go in the period. But, before the period was out, Calen Addison snapped home his sixth goal of the season to make it 4-2 Lethbridge after twenty minutes of play. The Hurricanes were outshot 14-12 in the opening frame.

Early in the second period, the Hurricanes added to their lead as Jake Leschyshyn scored his 22nd goal of the year to make it 5-2 just 4:45 into the period; Henry and Jordy Bellerive picked up the assists on the goal. Kootenay cut the lead to two as Cole Muir banged home a rebound in front to make it 5-3 for the ‘Canes. Ginnell was assessed a five-minute major checking to the head penalty and a game-misconduct for a blind-side hit on Bellerive and the ‘Canes made the Ice pay with the man advantage. The ‘Canes struck twice before the end of the period as Cozens rifled home his second of the night and 20th goal of the season with 56 seconds left from Henry and Addison before Leschyshyn scored his second of the night and 23rd of the season with 30 seconds left from Ty Prefontaine and Bellerive as the Hurricanes led 7-3 after forty minutes of play.

The teams traded goals in the third period as the Ice would strike on the power play at the 11:11 mark as Jakin Smallwood tipped home his fourth of the season to make it 7-4. Lethbridge found a power play goal of their own as Bellerive blasted home his 18th of the season from Addison and Leschyshyn to round out the scoring making it an 8-4 final.

Final shots favoured the Ice 37-31 in the game. Lethbridge went 3/6 on the power play while Kootenay was 3/8 with the extra man.

The eight goals matched a season-high for the Hurricanes who had scored eight in a game on three prior occasions. The win for the Hurricanes improves their record to 19-10-4-2 on the season as they bounce back after a 6-2 defeat by Victoria on Friday. The ‘Canes are now 10-2-2-0 in their last 14 games.

The Hurricanes will conclude their three-in-three weekend on Sunday when they welcome the Medicine Hat Tigers. Tickets can be purchased online at www.enmaxcentre.ca, by calling 403-329-SEAT (7328) or by visiting the ENMAX Centre Ticket Centre.