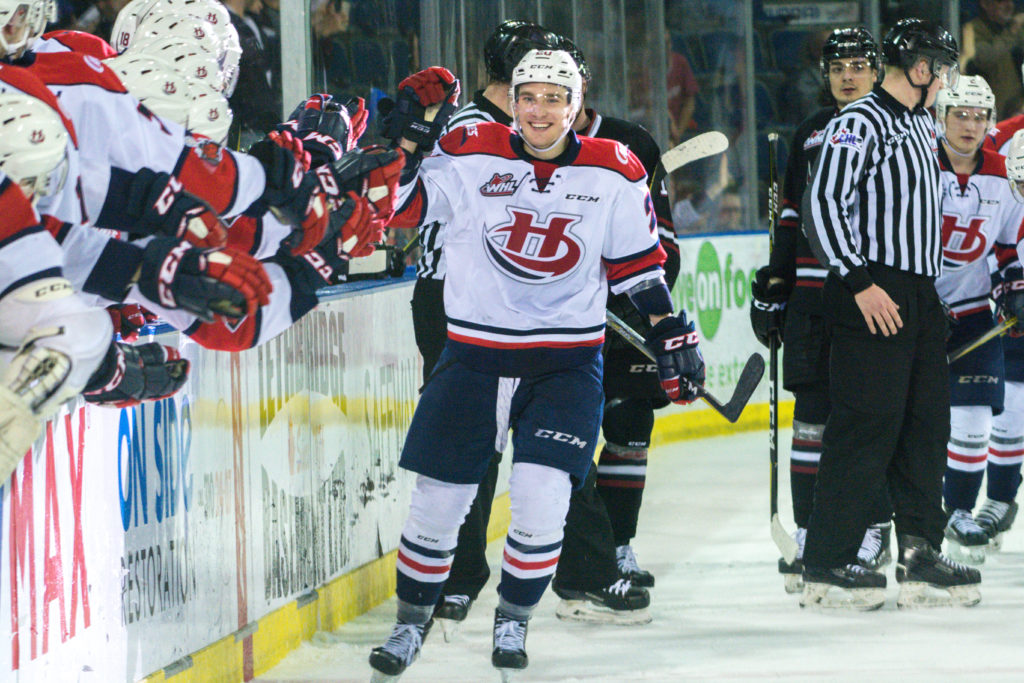 Lethbridge, AB – The Lethbridge Hurricanes began the 2018 WHL Playoffs on Friday with a convincing 6-0 victory in Game 1 of their first round best-of-seven series against the Red Deer Rebels.

The Hurricanes and Rebels came out flying to open the first period but an early penalty to Jadon Joseph resulted in a Red Deer power play just 1:33 into the game. The Rebels mustered a few good looks on the man advantage but were unable to beat Logan Flodell. The Hurricanes were outshot in the opening frame 10-5 as the game was scoreless after twenty minutes of play.

In the second period, the Hurricanes jumped on the board just 3:01 as Jordy Bellerive ripped a shot to the goal was deflected off Taylor Ross and passed Riley Lamb to make it 1-0; Calen Addison earned the second assist on the goal. Just 5:22 later, the ‘Canes added to their lead as Tate Olson, who returned to the line-up after missing the end of the regular season, pinched in and buried fifth career playoff goal to make it 2-0 Lethbridge; Ross and Logan Barlage picked up the helpers on the goal. The ‘Canes were outshot 13-12 in the second period.

The Hurricanes blew it open in the third period with four goals. Brad Morrison scored his first of the playoffs to make it 3-0 ‘Canes at the 6:50 mark; Jake Elmer and Jadon Joseph picked up the assists. On a power play, Bellerive ripped home his first to make it 4-0 from Morrison and Olson before Logan Barlage scored his first ever playoff goal on a man advantage to make it 5-0. Elmer rounded out the scoring to make it a 6-0 final at the 16:52 mark; Joseph and Zane Franklin earned the assists on the goal.

The Hurricanes outshot the Rebels 9-7 in the third period but were outshot 39-26 in the game. The ‘Canes were perfect in the special teams going 3/3 on the power play and 7/7 on the penalty kill.

The win for the Hurricanes gives them a 1-0 series lead in the best-of-seven first round match-up with the Rebels as the hang on to home-ice advantage. The shutout for Flodell was his first as a Hurricane in his first ever post-season start in his career.

The Hurricanes will host the Rebels in Game 2 on Saturday night at 7:00pm at the ENMAX Centre. Tickets for the game can be purchased online, by calling 403-329-SEAT (7328) or by visiting the ENMAX Centre Ticket Centre.