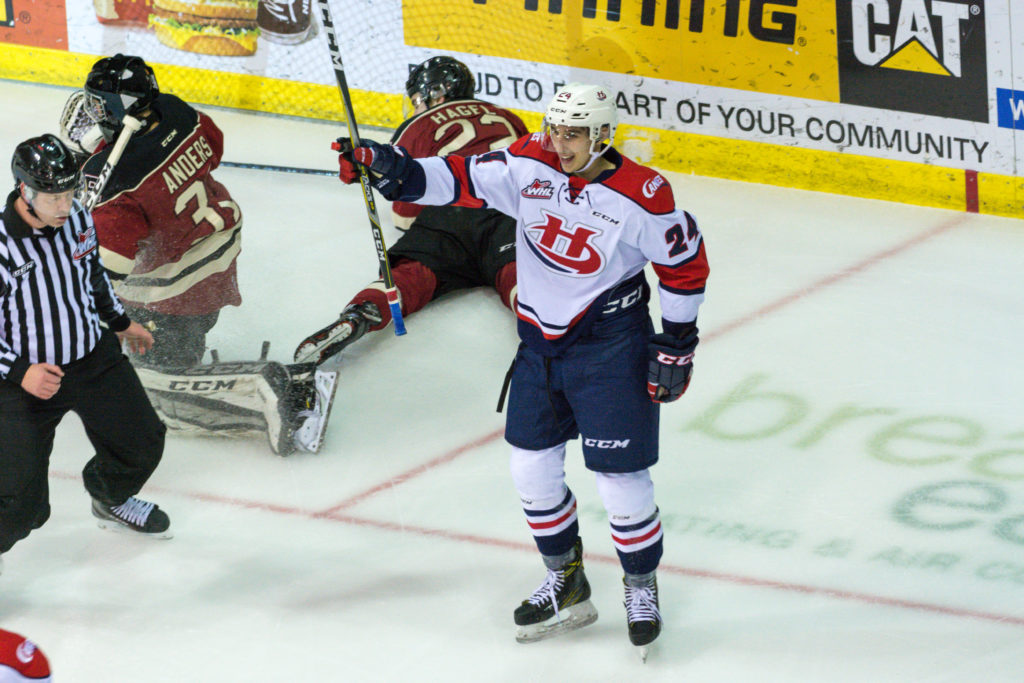 Lethbridge, AB – The Lethbridge Hurricanes played Game 2 of their opening round playoff series with the Red Deer Rebels on Saturday at the ENMAX Centre as they took a 2-0 series lead with an 8-3 victory.

It was a wild first period that saw a total of six goals, four of them for the Hurricanes. The ‘Canes were penalized just 27 seconds into the game as Jadon Joseph was assessed a roughing penalty. On the ensuing power play, the Rebels opened the scoring as Brandon Hagel blistered home his first of the series to make it 1-0 just 59 seconds into the game. The ‘Canes were given two more quick penalties and on the third one they would strike shorthanded as Dylan Cozens finished off a two-on-one to make it a 1-1 tie. Cozens struck again on the power play to make it 2-1 at the 11:49 mark before Zach Cox sniped home his first ever playoff goal at the 13:03 mark to make it 3-1 Lethbridge. The Cox goal gave the Rebels starter Ethan Anders the hook as he allowed three goals on nine shots; Riley Lamb replaced him in net and was tested early. Brad Morrison, who had two assists in the period, scored a beautiful goal to make it 4-1. Rebels answered back however as Josh Tarzwell back-handed one by Logan Flodell with 1:22 left in the period to make it a 4-2 score. The Hurricanes were outshot 17-11 in the first period.

The Hurricanes started the second period down two men as the Rebels had a five-on-three power play advantage but they were unable to get anything going as the ‘Canes killed the penalties to remain ahead by a 4-2 score. The ‘Canes added to their lead at the 6:59 mark as Taylor Ross one-timed home his second of the playoffs to make it 5-2 Lethbridge; Cozens earned the lone assist on the goal. Cozens completed the playoff hat-trick at the 8:39 mark as he back-handed home a power play goal to make it 6-2. Just 37 seconds later, the ‘Canes struck again on a power play as Jordy Bellerive beat Lamb on a rebound to make it a 7-2 lead after forty minutes of play. The Hurricanes outshot the Rebels 16-9 in the middle frame.

The teams traded goals in the third period as Morrison potted his second of the night and sixth point at the 4:43 mark to make it an 8-2 lead; Igor Merezhko and Kale Elmer drew the helpers on the goal that gave the ‘Canes a six goal advantage. Reece Klassen came into the game at the media time-out of the third period. On a power play, Hagel blasted home his second of the night to make it an 8-3 final.

The win for the Hurricanes was their fifth straight victory in the post-season over the Rebels dating back to last season. The ‘Canes now have a 2-0 series lead in the best-of-seven first round series.

The Hurricanes and Rebels will now shift to Red Deer for Game’s 3 and 4 on Tuesday and Wednesday at the ENMAX Centrium. Both of those games can be heard on 106.7 ROCK or watched at either Browns Socialhouse location in Lethbridge.