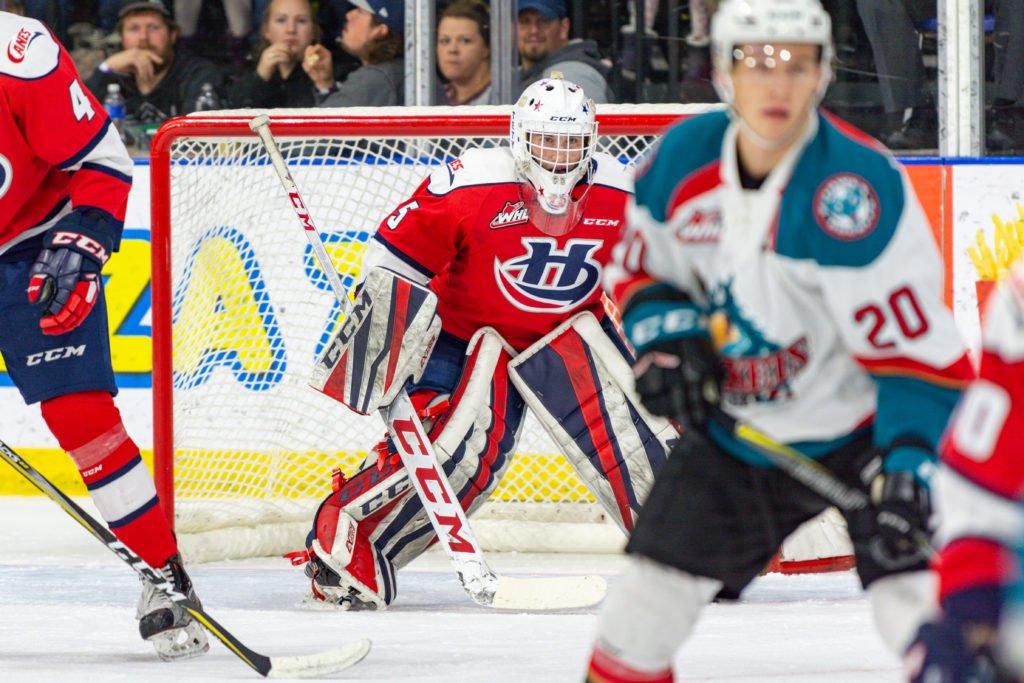 Lethbridge, AB – The Lethbridge Hurricanes returned to the ENMAX Centre on Wednesday as they earned a 5-1 victory over the Kelowna Rockets.

It was a good start for the Hurricanes who tallied just 2:16 as Zach Cox scored his tenth goal of the season to make it 1-0; Adam Hall earned the lone assist on the goal. The ‘Canes continued to pressure the Rockets on a power play but couldn’t solve Rockets starter Roman Basran to build on their lead. Kelowna received a power play opportunity of their own, but it was the ‘Canes the struck, as Jake Leschyshyn snapped home his team-leading 20th goal of the season to make it 2-0 Lethbridge after twenty minutes of play. The ‘Canes outshot the Rockets 13-8 in the first period.

The Hurricanes continued to fire shots on net in the second period as they outshot the Rockets 14-8 in the middle frame. Lethbridge, who killed a Leschyshyn penalty to start the period, would add to their lead at the 8:58 mark as Jake Elmer scored his 16th goal of the season to make it 3-0; Taylor Ross and Dylan Cozens earned the assists on the goal as the ‘Canes led by three after two periods.

In the third period, the ‘Canes added to their lead as Jordy Bellerive rifled home his 13th goal of the season at the 4:05 mark to make it 4-0; Danila Palivko and Nolan Jones picked up the helpers on the goal. Ross made it a 5-0 lead with his 18th of the year at 6:33; Cozens and Koletrane Wilson earned the assists. Kelowna broke Carl Tetachuk’s shutout bid as Liam Kindree snapped home a power play goal with a 6:21 left in the game to make it a 5-1 final.

The win for the Hurricanes snapped a three-game losing streak to the Rockets dating back to December of 2016. The win improved their record to 16-9-4-2 overall on the season and 9-2-2-0 in their last 13 games at the ENMAX Centre.

The Hurricanes will play their final home game of the first half on Saturday, December 15th as they welcome the Kamloops Blazers to the ENMAX Centre. . Tickets can be purchased online at www.enmaxcentre.ca, by calling 403-329-SEAT (7328) or by visiting the ENMAX Centre Ticket Centre.