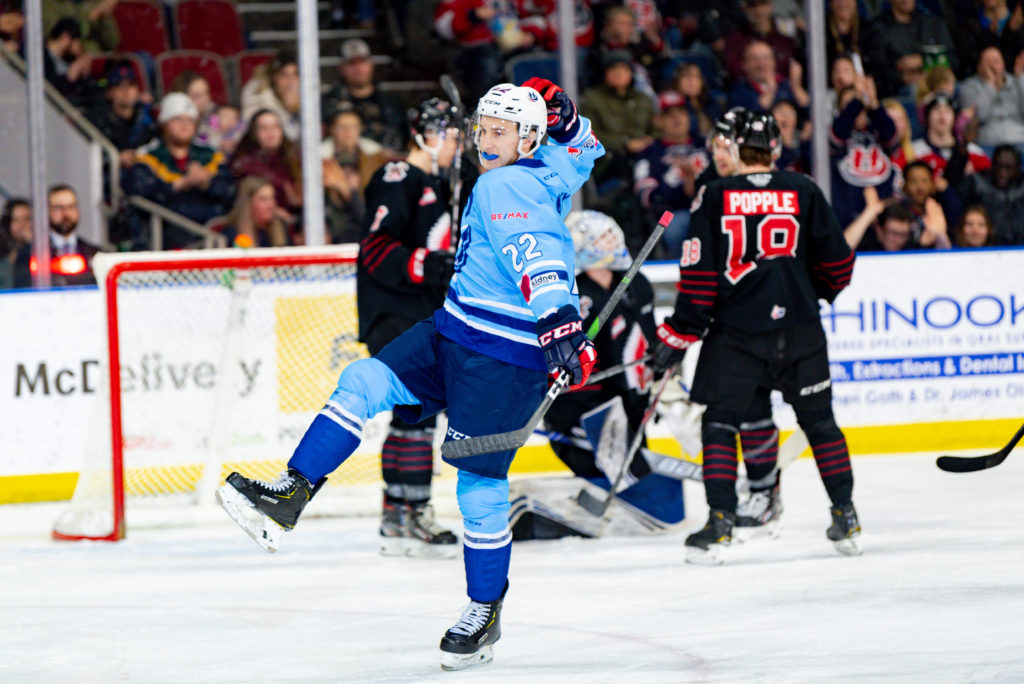 Lethbridge, AB – The Lethbridge Hurricanes continued a four-game homestand on Friday as they ended a three-game losing streak with an 8-2 win over the Moose Jaw Warriors.

It was a see-saw first period that saw the teams combine for four goals in the opening twenty minutes. The Warriors opened the scoring just 2:13 into the game as Calder Anderson beat Bryan Thomson on a breakaway to make it 1-0 on Moose Jaw’s first shot of the game. The Hurricanes tied the game with a power play goal just 2:14 later as Brett Davis scored his 21st goal of the season to make it a 1-1 tie. Moose Jaw once again pulled ahead with a power play goal of their own as Martin Lang scored his 13th of the season at the 9:44 mark to make it 2-1 for the Warriors. Just under four minutes later, the Hurricanes once again tied the as Dino Kambeitz ripped home his 15th goal of the season with 6:45 left in the period to tie the game 2-2 after twenty minutes of play. Lethbridge held the edge in shots 15-6 in the first period.

The Hurricanes exploded for four goals in the second period to blow the game wide-open. The ‘Canes took their first lead of the night as Danila Palivko snapped home a point shot that deflected off a Warriors defenseman to make it 3-2 Lethbridge. The ‘Canes doubled their lead with the second power play goal of the night for Davis who one-timed home his 22nd of the season to make it 4-2. Lethbridge continued to poor it on as Zack Stringer banged home a loose puck after a foiled wraparound attempt by Oliver Okuliar to make it 5-2. Okuliar then scored on a breakaway just 1:14 later as he netted his 32nd of the year to make it 6-2 for the ‘Canes after forty minutes of play. The Hurricanes outshot the Warriors 18-3 in the middle frame, tying the mark of least amount of shots surrendered in a single period this year for the ‘Canes.

In the third period, the Hurricanes outshot the Warriors 15-4 and would add to their lead as Davis completed his first WHL hat-trick deflecting a Calen Addison point shot to net his 23rd goal of the season giving the ‘Canes a 7-2 lead. Lethbridge rounded out the scoring late with a power play goal by Jett Jones with 2:30 minutes left in the game to make it an 8-2 final.

The Hurricanes outshot the Warriors 48-13 in the game. Lethbridge went 3/3 on the power play while Moose Jaw was 1/2 with the extra man.

The Hurricanes continue their four-game homestand on Friday, February 28th when they welcome the Edmonton Oil Kings to the ENMAX Centre at 7:00pm. Tickets can be purchased online at www.enmaxcentre.ca, by calling 403-329-SEAT (7328) or by visiting the ENMAX Centre Ticket Centre.