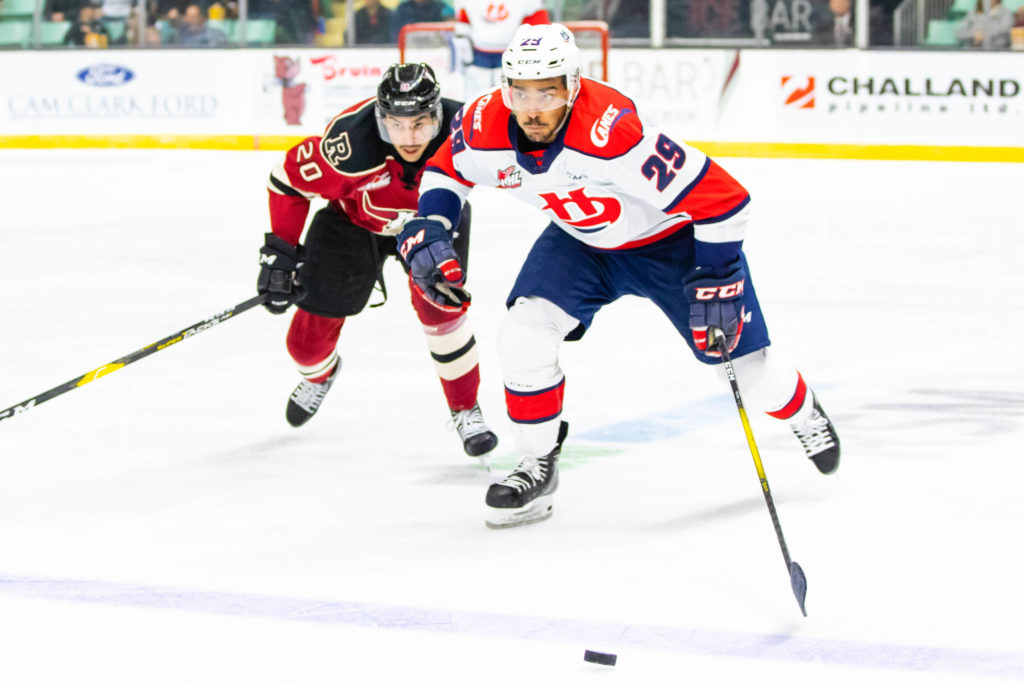 Lethbridge, AB – The Lethbridge Hurricanes returned to the win column on Saturday with a lopsided 11-2 win over the Red Deer Rebels at Westerner Park Centrium.

The Hurricanes were dominant in the first period as they outshot the Rebels 15-14 but scored five times in the opening frame. The ‘Canes opened the scoring when Koletrane Wilson scored his third goal of the season making it 1-0. Noah Boyko, who assisted on the Wilson goal, scored four the fourth straight game when he ripped one over the blocker of Ethan Anders to make it 2-0. Lethbridge made it 3-0 when D-Jay Jerome netted his 12th goal of the season ending the night of Anders as he allowed three goals on 11 shots. The ‘Canes added two more goals in 13 seconds at the end of the period when Dylan Cozens and Jerome potted back-to-back tallies as the Lethbridge lead 5-0 after twenty minutes.

Lethbridge continued to add to their lead in the second period when Calen Addison ripped home a power play goal at the 11:27 mark to make it 6-0. Red Deer broke Bryan Thomson’s shutout bid when Cameron Hausinger scored his fourth goal of the campaign. Addison netted his second goal of the period – and sixth on the year – again on a power play before Justin Hall scored his fourth goal of the season on a breakaway with just 30 seconds left in the period to make it 8-1 for the Hurricanes after just forty minutes.

The teams combined for four goals in the third period as the ‘Canes continued their dominance when Logan Barlage slammed home a rebound off the end wall to make it 9-1 just 42 seconds in the final frame. Calen Addison completed his first WHL hat-trick with a point shot at the 3:22 mark before Trevor Thurston blew home his second goal in three games with the Hurricanes on a power play to make it 11-1. Red Deer added a late goal when Ethan Sakowich ripped home his fifth goal of the year to make it and 11-2 final.

The Hurricanes outshot the opposition for the 10th straight game as they held the edge 37-28 over Red Deer. The ‘Canes went 3/9 on the power play while going 4/4 on the penalty kill.

The Hurricanes will be back at the ENMAX Centre on Wednesday when they welcome the Regina Pats on Student Night at 7:00pm. Tickets can be purchased online at www.enmaxcentre.ca, by calling 403-329-SEAT (7328) or by visiting the ENMAX Centre Ticket Centre.