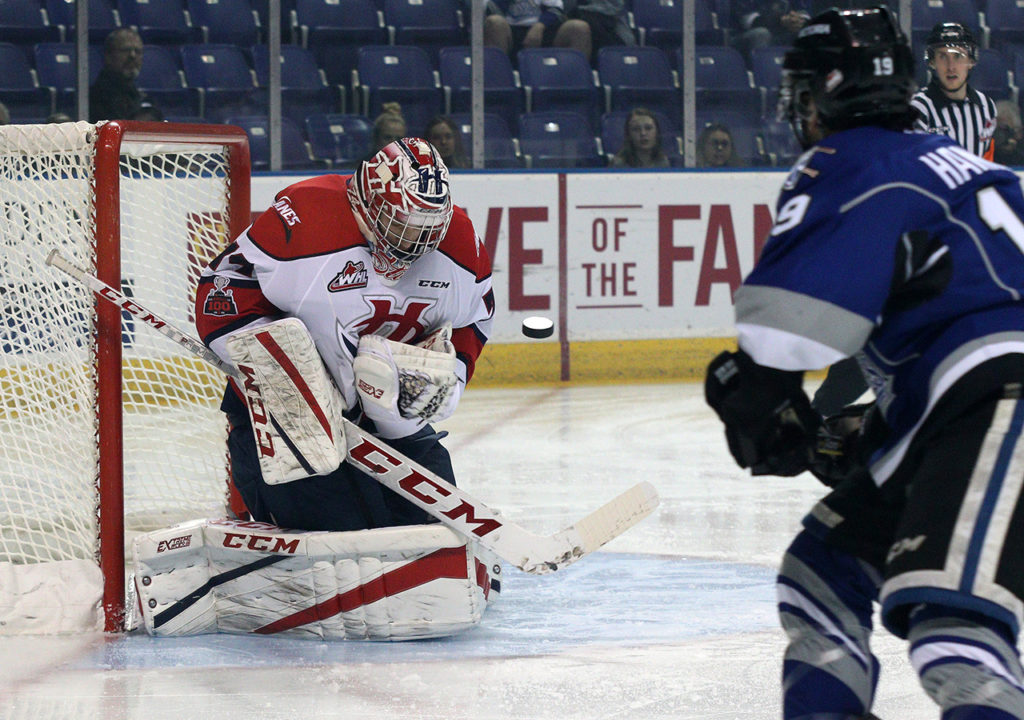 Victoria, BC – The Lethbridge Hurricanes snapped their eight game losing streak in impressive fashion on Tuesday with a 10-4 victory over the Western Conference leading Victoria Royals at the Save-On Foods Memorial Centre.

It was a spirited first period that saw multiple after whistle scrums, including a lengthy one at the end of the period. After a post-whistle scrum, there were off-setting penalties that resulted in four-on-four hockey that saw a goal by Victoria at the 8:02 mark as Matthew Smith beat Stuart Skinner with a bullet from the line to make it 1-0. The ‘Canes quickly answered 2:10 later as Ryan Vandervlis beat Griffen Outhouse five-hole on a partial breakaway to make it 1-1. Vandervlis struck again on a power play at the 15:41 mark redirecting a Jordy Bellerive point shot by Outhouse to give the ‘Canes a 2-1 lead after twenty minutes of play. The ‘Canes outshot the Royals 12-10 in the first period.

Victoria tied the game at the 4:20 mark with a shorthanded goal by Tyler Soy to tie the game 2-2. But after that, it was all Hurricanes who scored five unanswered goals in the middle frame. Giorgio Estephan netted his 10th of the season to put the ‘Canes back ahead 3-2 at the 7:13 mark. Calen Addison made it 4-2 Lethbridge as he rifled one by Outhouse. Vandervlis completed his first WHL hat-trick just 41 seconds later as he scored his ninth of the season. Estephan added another power play on a one-timer to make it 6-2 ‘Canes before Bellerive scored his 11th of the season also on the power play with 3:41 left in the period. The Hurricanes outshot the Royals 15-4 in the second period and led 7-2 after forty minutes.

The Royals got on the board early in the third period as Matthew Phillips struck for his 19th of the season at the 2:23 mark while on a power play to make it a 7-3 game. Just over five minutes later, the ‘Canes struck again on the power play as Zane Franklin scored his eighth of the season while up a man. Another power play goal by Victoria made it an 8-4 game as Chaz Reddekopp snapped one by Skinner. The ‘Canes added two more special teams goals as Josh Tarzwell potted a shorthanded goal before Tanner Nagel helped the ‘Canes to double digits as he scored his third on the power play helping the ‘Canes to the 10-4 win.

Shots in the third period were tied 10-10, but the ‘Canes outshot the Royals 37-24 in the game The ‘Canes went an impressive 6/11 on the power play while Victoria was 2/6 with the extra man.

The Hurricanes had a total of six players have multi-point games including Vandervlis, Estephan and Addison who all had four point efforts. Bellerive and Tarzwell each had three point nights while Franklin had a pair of points in the win.

The victory snaps the ‘Canes eight game losing streak and improves their record to 8-12-1-0 on the season and 2-7-0-0 on the year. The Hurricanes return to action on Wednesday when they travel to face the Vancouver Giants at the Langley Events Centre tomorrow at 8:00pm.