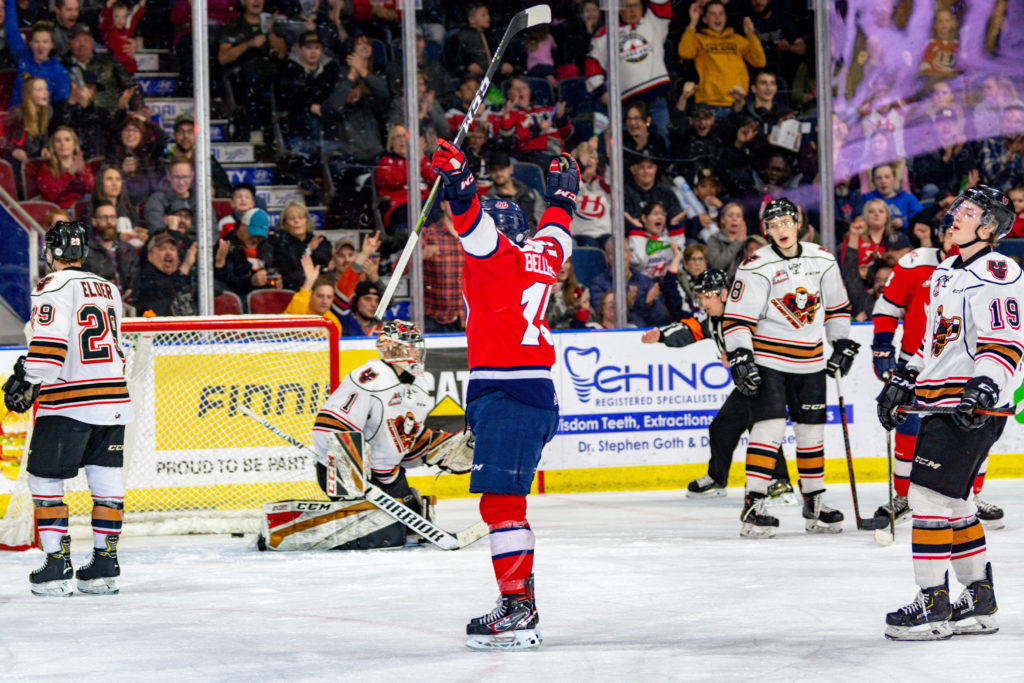 Lethbridge, AB – The Lethbridge Hurricanes played their final home game of the regular season on Saturday with a 7-4 win over the Calgary Hitmen at a sold-out ENMAX Centre.

The Hurricanes and Hitmen skated to an even first period as Calgary held the edge in shots 12-11 in the opening frame. The Hitmen opened the scoring at the 11:12 mark as Sean Tschigerl scored his first ever goal in the WHL to make it 1-0 Calgary. Lethbridge tied the game at the 14:23 mark as Taylor Ross redirected home his 33rd goal of the season to make it a 1-1 game; Jordy Bellerive and Nick Henry earned the helpers. The ‘Canes took the lead late in the first period with a power play goal by Taylor Ross with just 11.1 second left to make it 2-1 at the first intermission; Bellerive and Henry were credited with the assists on the go-ahead goal.

Lethbridge exploded for three goals in the second period as Ross completed the hat-trick at the 1:16 mark he ripped home his 35th goal of the season to make it 3-1; Jake Elmer and Dylan Cozens earned the assists on the goal. Jackson Shepard popped home his fifth of the year, and first at the ENMAX Centre, at the 7:18 mark to make it 4-1 before Elmer sniped his 38th of the season as Lethbridge led 5-1 after forty minutes. Hurricanes outshot the Hitmen 14-7 in the second period.

In the third period, the teams combined for five goals. Calgary netted a shorthanded goal at the 9:33 when Riley Fiddler-Schultz scored his third of the season. Bellerive scored twice in a span of 2:32 as he popped home his 31st and 32nd goals of the season to quickly make it a 7-2 game. The Hitmen scored two late goals as James Malm and Vladislav Yeryomenko rounded out the scoring to make it a 7-4 final.

Shots in the third period were tied 9-9 but the Hurricanes held the edge 34-28 in the game. Lethbridge and Calgary both went 1/4 on the power play in the hockey game.

The win for the Hurricanes extends their season-long winning streak to six games as they are now and impressive 9-1-0-0 in their last ten games. Lethbridge finishes the regular season with a 20-9-1-4 record in 34 home games at the ENMAX Centre as they improved to 38-18-5-5 on the year.

The victory for the Hurricanes against the Hitmen secures the ‘Canes home-ice advantage in first round of the WHL playoffs as they will finish no worse than second in the Central Division; the ‘Canes sit tied in points with the Edmonton Oil Kings for top spot in the division.

The Hurricanes will hit the road for the final weekend of the next week with games in Red Deer and Medicine Hat on Friday and Saturday. The ‘Canes will be back at the ENMAX Centre for Game 1 of the WHL Playoffs. Individual game tickets for the first round will be available for purchase on Wednesday, March 20th at 9:00am. They can be purchased online at www.enmaxcentre.ca, by calling 403-329-SEAT (7328) or by visiting the ENMAX Centre Ticket Centre. 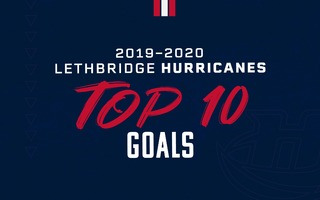