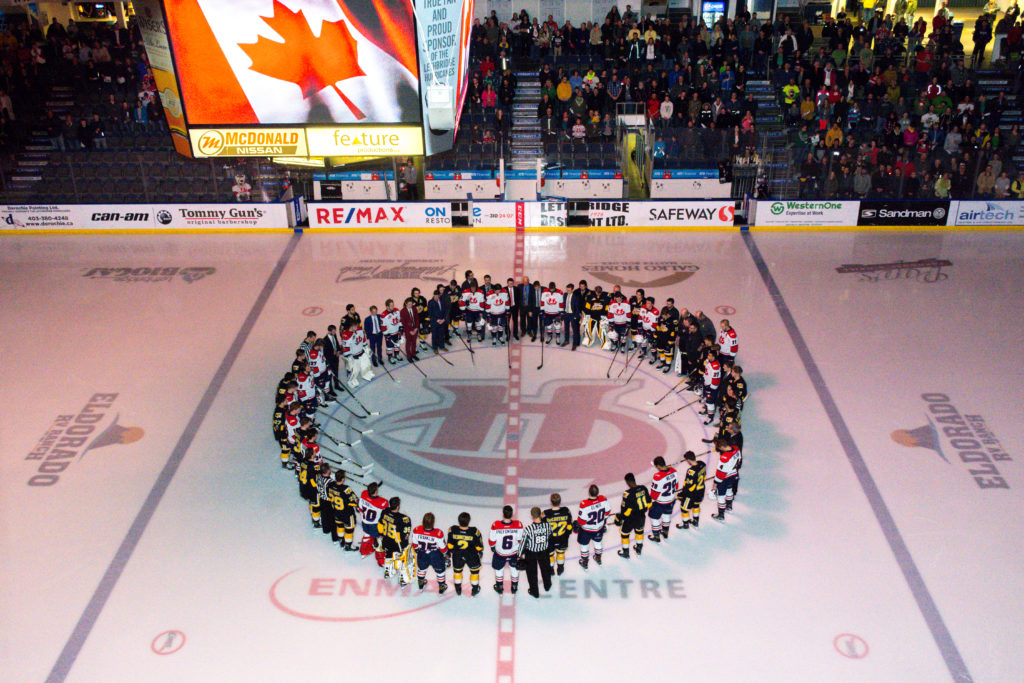 Lethbridge, AB – The Lethbridge Hurricanes hosted the Brandon Wheat Kings in Game 2 of their best-of-seven second series on Saturday at the ENMAX Centre as they erased a 4-0 deficit to take a 2-0 series lead with a 5-4 overtime victory.

Prior to the hockey game, the Hurricanes and Wheat Kings stood with each other around the centre ice circle during a moment of silence held for the victims of the horrific bus accident involving the Saskatchewan Junior Hockey League’s Humboldt Broncos.

The Wheat Kings came out firing early in the second period as they added to their lead just 2:55 into the middle frame as Connor Gutenberg roofed one short-side on Logan Flodell to make it 2-0. Just 41 seconds later, Stelio Mattheos struck to make it 3-0 before Evan Weinger scored a shorthanded goal to make it 4-0 Brandon just 4:27 into the second period. The Hurricanes pushed back and broke the shutout bid of Myskiw as Jordy Bellerive snapped home his seventh of the season to make it 4-1; Tate Olson and Brad Morrison picked up the assists on the goal. Just 2:03 later, the ‘Canes struck again as Taylor Ross one-timed a pass from Dylan Cozens while shorthanded to make it 4-2; for Ross, his second shorthanded goal in as many games and eighth of the playoffs. Shots in the second period favoured the Wheat Kings 16-5.

In the third period the Hurricanes continued to chip away at the Brandon lead and made it a one goal game as Bellerive snuck home his second of the game at the 12:11 mark to make it a 4-3 game; Matthew Stanley and Koletrane Wilson picked up the assists. The ‘Canes tied the game as Jake Elmer rifled home a power play goal at the 17:22 mark to tie the game at 4-4; Zane Franklin and Olson earned the assists. Hurricanes outshot the Wheat Kings 16-7 in the third period and 36-27 through sixty minutes.

In the extra session the ‘Canes had countless opportunities to win the game but couldn’t solve Myskiw, even with a power play in the overtime period. Mattheos hit a goal-post moments prior to the Hurricanes winning the game. At the 16:31 mark Olson played hero as he scored his third of the post-season to lift the ‘Canes to a come-back victory; Morrison and Bellerive assisted on the game-winning goal.

The Hurricanes now lead the best-of-seven series two games to none after outscoring the Wheat Kings 10-5 in two games.

The Hurricanes and Wheat Kings will now shift to Brandon for Games 3 and 4 on Tuesday and Wednesday at Westoba Place. The games can be heard on 106.7 ROCK or watched at Browns Socialhouse in Lethbridge.