Hurricanes Come From Behind; Edge Winterhawks 4-3 in Shootout 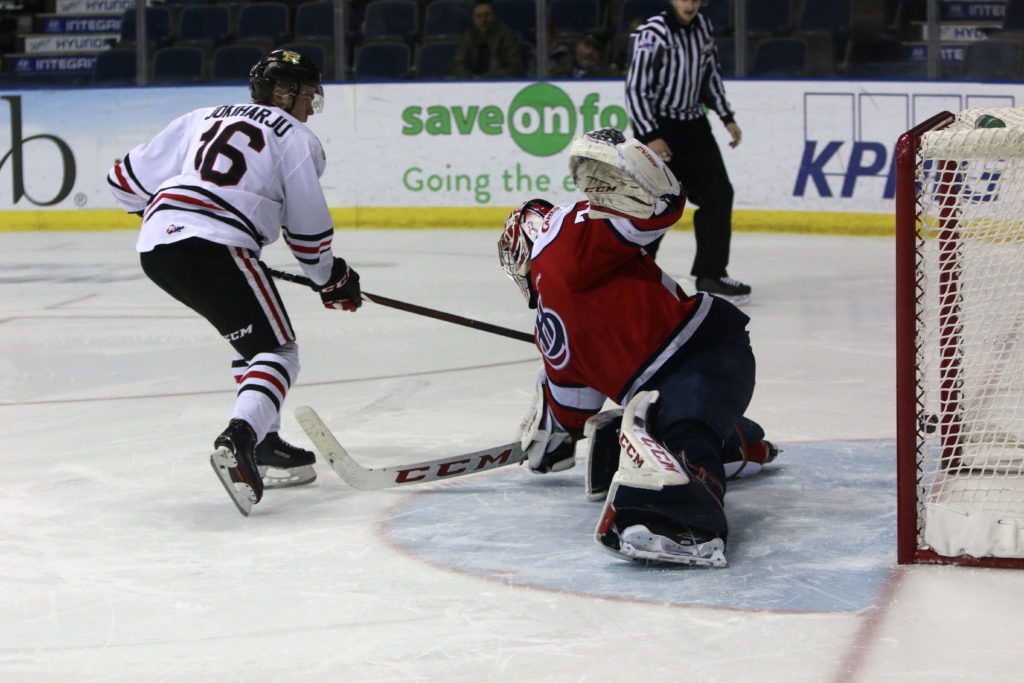 Lethbridge, AB – The Lethbridge Hurricanes returned to the ENMAX Centre for the first time in 18 days on Tuesday as they began a three-game homestand with a come-from-behind 4-3 shootout victory over the Portland Winterhawks.

The game has pace early in the opening period as the ‘Canes generated some early odd-man rushes including a pair of two-on-ones but didn’t muster a shot on either. Portland started to take control of the game in the middle part of the period as they started peppering Stuart Skinner who stood tall. Neither team had a power play in the opening frame that came to an end in a scoreless tie. Portland outshot the Hurricanes 16-3 in the first period.

Portland opened the scoring just 1:12 into the second period as Ilijah Colina backhanded one by Skinner to make it 1-0 with a power play goal. The Winterhawks added another power play goal as Henri Jokiharju snapped one home at the 8:18 mark to make it a 2-0 Portland lead. The ‘Canes quickly answered as Jordy Bellerive extended his goal-scoring streak to six straight games with his 14th of the season at the 10:56 mark beating Cole Kehler five-hole to cut the Portland lead to 2-1 after two periods of play. The ‘Canes were outshot 15-11 in the second period.

Portland added to their lead early in the third period as Cody Glass netted a third power play goal just 5:17 into the period to make it 3-1 ‘Hawks. The Hurricanes, who were 0-10-0-0 on the season when trailing after two periods, were able to forge a comeback. Zane Franklin pulled the ‘Canes to within one goal with a five-on-three power play goal banging home a rebound to make it 3-2 Portland. On the play, Kehler was issued a delay-of-game penalty resulting in another five-on-three power play and just 32 seconds later Bellerive sniped home his second of the game to tie the game 3-3 and forcing overtime. Hurricanes were outshot 13-10 in the third period.

The Hurricanes were issued a too many men penalty late in the third period that carried over to the extra session. The ‘Canes were able to kill off the penalty in overtime. Portland outshot the Hurricanes 3-0 in overtime but Skinner was outstanding.

The game went to a shootout. Bellerive scored with the first shot to see Joachim Blichfeld answer. Neither team scored through six rounds until Franklin scored to put the ‘Canes ahead. Skinner stopped Colina to send the ‘Canes to the win.

Portland outshot the ‘Canes 47-24 in the game. Lethbridge was 2/5 with the power play while Portland was 3/5 with the extra man.

The win for the Hurricanes extended their winning streak to four straight games and puts an end to Portland’s ten game winning streak. The ‘Canes snapped a four game home losing streak and improve their record to 11-12-1-0 on the year.

The Hurricanes return to action on Friday when they welcome the Brandon Wheat Kings before the Victoria Royals come to town on Saturday for the 22nd Annual Canadian Tire Teddy and Toque Toss. Tickets for both games can be purchased with a 2 for $32 deal by calling 403-329-SEAT (7328).