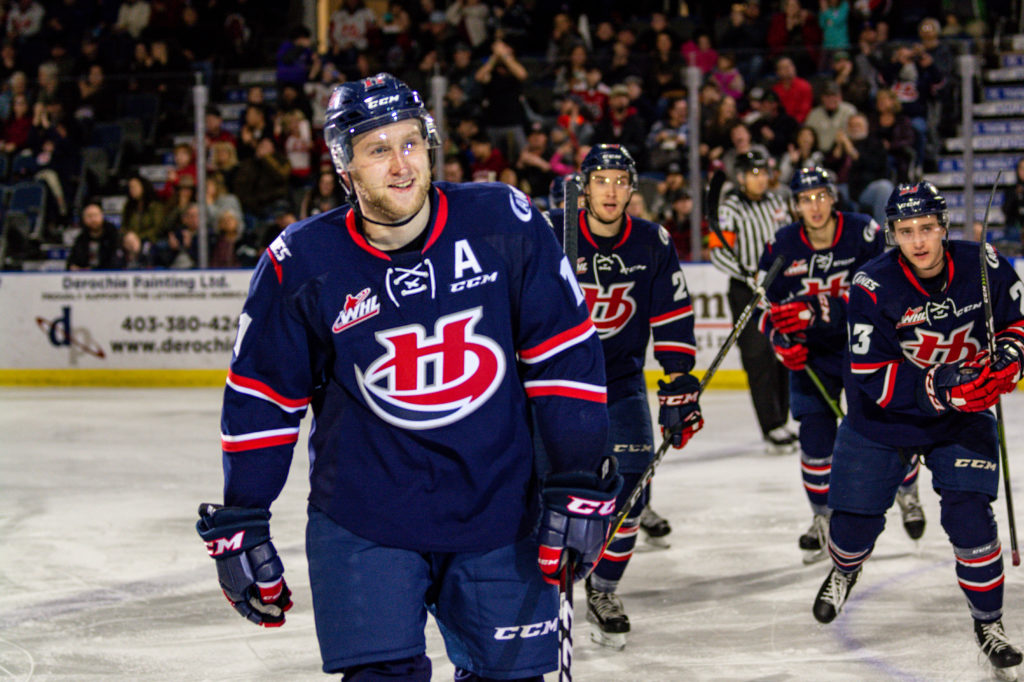 Lethbridge, AB – The Lethbridge Hurricanes began a six-game homestand on Friday with a convincing 6-2 victory over the Red Deer Rebels at the ENMAX Centre.

The ‘Canes came out flying in the first period outshooting the Rebels 8-1 early. The Hurricanes opened the scoring on a power play goal by Jake Leschyshyn who ripped home his 28th goal of the season at the 5:39 mark to make it 1-0; Calen Addison and Jordy Bellerive earned the assists on the goal. Lethbridge made it 2-0 as Nick Henry buried a rebound for his 19th of the season after Logan Barlage hit a crossbar as the ‘Canes led 2-0 after twenty minutes of play.

Red Deer cut the ‘Canes lead in half early in the second as former Hurricane Josh Tarzwell potted his seventh of the season just 2:03 into the middle frame to make it a 2-1 game. Lethbridge answered back as Leschyshyn snapped home his second of the game to restore the ‘Canes two-goal lead; Bellerive and Noah Boyko picked up the assists on the goal. Henry scored his second of the night as he became the sixth Hurricane to reach the 20-goal plateau making it 4-1 Lethbridge; affiliate player Zack Stringer earned his first WHL point with an assist on the goal while Dylan Cozens earned the second helper. Before the period was out, Red Deer’s Oleg Zaytsev banged home a rebound to make it a 4-2 game after two periods.

In the third period, the Hurricanes scored the only two goals as Igor Merezhko netted both. Merezhko’s first came on a power play at the 3:12 mark with a slapshot from the right circle as he ripped it by Byron Fancy, who replaced Ethan Anders midway through the second period, to make it 5-2 for the Hurricanes; Henry and Nick Henry earned the helpers. Merezhko scored his second of the night into an empty-net to round out the scoring.

Shots in the third period favoured the Rebels 7-4 but the ‘Canes held the edge 29-28 in the game. Lethbridge went 2/4 on the power play and 6/6 on the penalty kill on the night.

The win for the Hurricanes snapped a two-game losing streak as they began February with the victory. The ‘Canes are now 17-7-2-2 in their last 28 games while improving their overall record to 26-15-4-4 on the season.

The win for the Hurricanes in regulation, coupled with a Medicine Hat loss, the ‘Canes leapfrog both the Tigers and Rebels and sit second in the tight Central Division at night’s end.

The Hurricanes will return to the ENMAX Centre on Saturday as they welcome the Swift Current Broncos at 7:00pm. Tickets can be purchased online at www.enmaxcentre.ca, by calling 403-329-SEAT (7328) or by visiting the ENMAX Centre Ticket Centre.