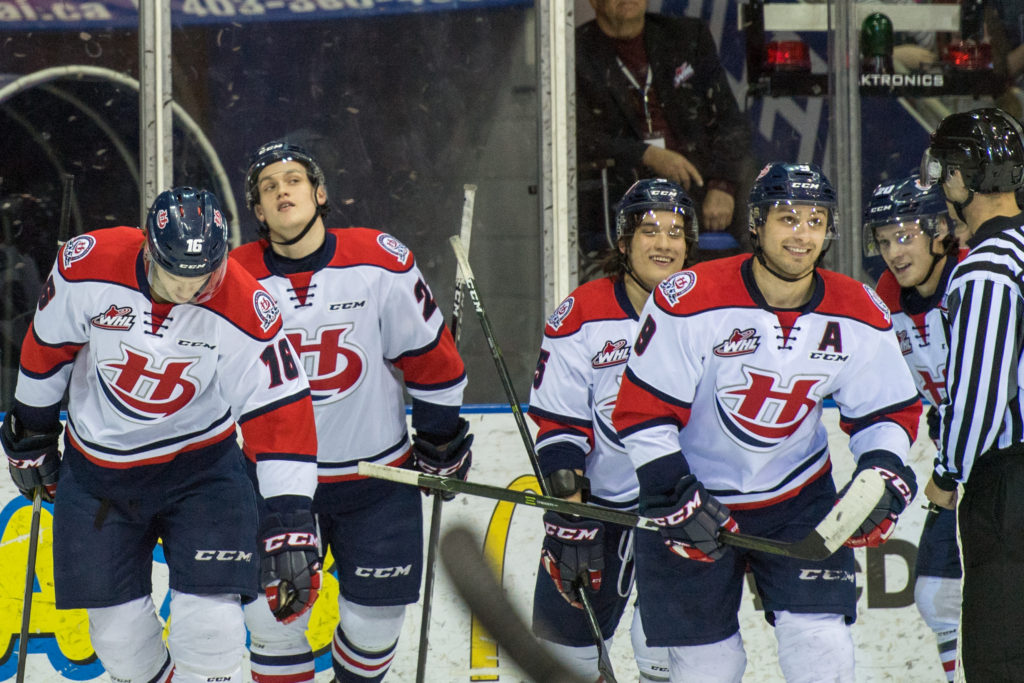 Lethbridge, AB – The Lethbridge Hurricanes continued their final home stand of the regular season on Wednesday night as they earned a 8-1 victory over the Kootenay Ice.

Prior to the game the Hurricanes handed out their annual awards during a lengthy pre-game ceremony but it sure didn’t affect the ‘Canes who came out firing. The ‘Canes with a power play quickly jumped out to a 1-0 lead as Giorgio Estephan scored his 33rd goal of the season at the 5:45 mark – Brennan Menell picked up the lone helper. The ‘Canes added two in 34 seconds as Alec Baer scored his 14th of the season at the 10:25 mark to make it 2-0 before Jordy Bellerive sniped his 27th of the season to make it a 3-0 advantage. Under five minutes later, the ‘Canes made it a 4-0 lead as Calen Addison pinched in and ripped home his eighth goal of the season – Jadon Joseph and Zane Franklin picked up the helpers. Lethbridge outshot Kootenay 19-10 in the opening period.

The Hurricanes continued to roll in the second period as they added two more goals. Estephan netted his second of the night and 100th WHL goal on a one-timer beating Jakob Walter at the 10:22 mark – Egor Babenko picked up the lone assist on the goal to make it 5-0 Hurricanes. Five minutes later, Estephan returned the favoured setting Babenko up backdoor for his 23rd goal of the season making it 6-0 Hurricanes after two periods of play. The ‘Canes held the shots 13-10 in the second period and 32-20 after forty minutes.

Kootenay broke the shutout bid for Stuart Skinner five minutes into the third period as Colton Kroeker scored his 18th goal of the season against his former team to make it 6-1. Hurricanes answered back however as Ryan Vandervlis scored his seventh of the season on a shorthanded breakaway at the 14:22 mark – Ryan Bowen picked up the lone helper. Estephan completed his first WHL hat-trick as he banged home his 35th goal of the season with 3:54 left in the game – Brennan Riddle and Matt Alfaro picked up the assists sending the Hurricanes to an 8-1 final.

The Hurricanes were outshot 14-13 in the third period but held the edge 45-34 in the game – it was the seventh straight game the Hurricanes have outshot the opposition. The ‘Canes went 1/4 on the power play and 4/4 on the penalty kill.

The win was the ‘Canes 25th on home ice this season as they’ve posted a 25-7-2-1 record at the ENMAX Centre. The Hurricanes improve to 44-19-4-3 on the season with the victory and surpass their point total from last season.

The Hurricanes will face the Red Deer Rebels in the first round of the playoffs after the Rebels earned a 5-1 win over the Calgary Hitmen on Wednesday night.

The ‘Canes will conclude their regular season home schedule on Friday when they welcome the Medicine Hat Tigers at the ENMAX Centre.