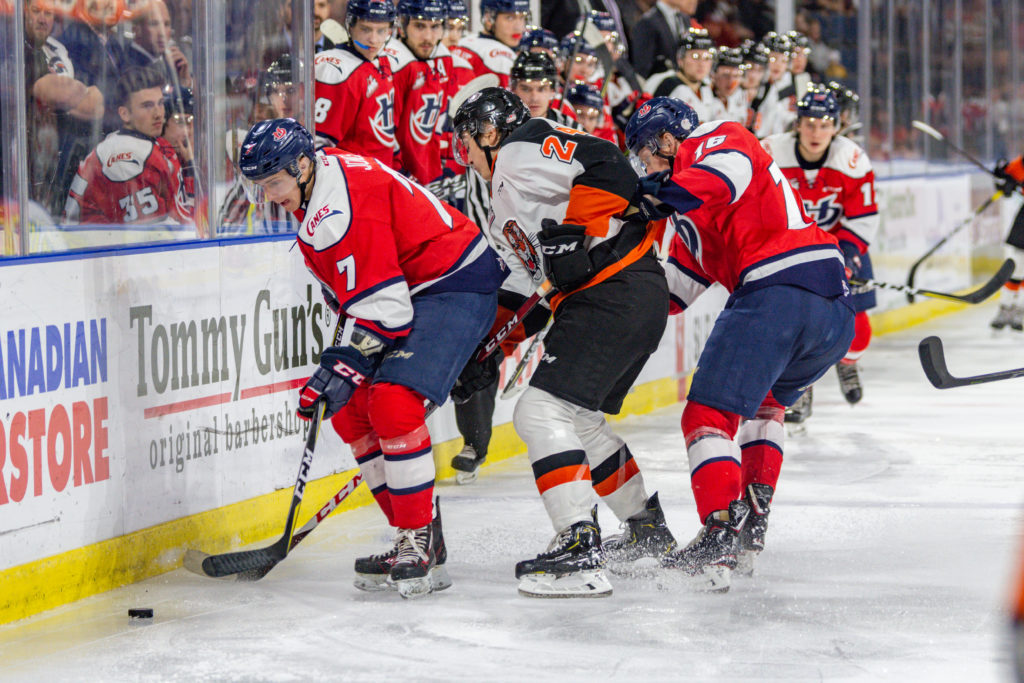 Medicine Hat, AB – The Lethbridge Hurricanes continued a three-in-three weekend on Saturday night as they earned a 3-1 win over the Medicine Hat Tigers to improve to 2-0-0-0 so far this weekend.

The Tigers, who were hosting their Teddy Bear Toss game, came out flying early in the first period as they peppered Hurricanes starting goaltender Reece Klassen with five shots in the first minute-and-a-half but failed to produce a goal. Medicine Hat eventually struck on a power play as James Hamblin rifled home his team-leading 12th of the season at the 14:38 mark as he caught the ‘Canes on a change to make it 1-0; Mads Sogaard, the Tigers goaltender, earned the only assist on the goal. Shots in the first period favoured the Tigers 11-7 as they held a 1-0 lead after twenty minutes of play.

Medicine Hat had two opportunities early in the second period to build their lead with power play’s but the ‘Canes were able to kill of both in the first seven minutes of the period. The Hurricanes pulled even on the scoreboard as Jordy Bellerive ripped home his 11th goal of the season at the 9:40 mark to make it 1-1; Alex Cotton drew the lone assist on the goal. Lethbridge took the lead at the 12:17 mark as Jake Leschyshyn netted his first as a Hurricane, and 17th of the season, on a power play to make it 2-1; Calen Addison and Bellerive earned the assists on the goal. Before the period was out, the ‘Canes added another power play goal with 26 seconds left as Dylan Cozens rifled home his 13th of the year from Addison and Nick Henry to make it 3-1; for Henry, it was his first point as a Hurricanes. Lethbridge outshot Medicine Hat 13-6 in the middle frame and led 3-1 after two periods.

In the third period, the Tigers would outshoot the Hurricanes 15-6 in the period but Klassen stopped every shot he faced in the final period helping the ‘Canes to the win as neither team would strike in the final twenty minutes.

Final shots favoured the Tigers 32-26 in the game. Lethbridge went 2/3 on the power play and 3/4 on the penalty kill.

The win for the Hurricanes was their second straight and fourth in their last five games as they are now 4-0-1-0 in their past five outings. The victory improves their road record to 6-4-3-0 and overall record to 13-8-3-2 on the season.

The Hurricanes will welcome the Red Deer Rebels on Sunday at the ENMAX Centre. Tickets for Sunday’s game can be purchased online at www.enmaxcentre.ca, by calling 403-329-SEAT (7328) or by visiting the ENMAX Centre Ticket Centre.