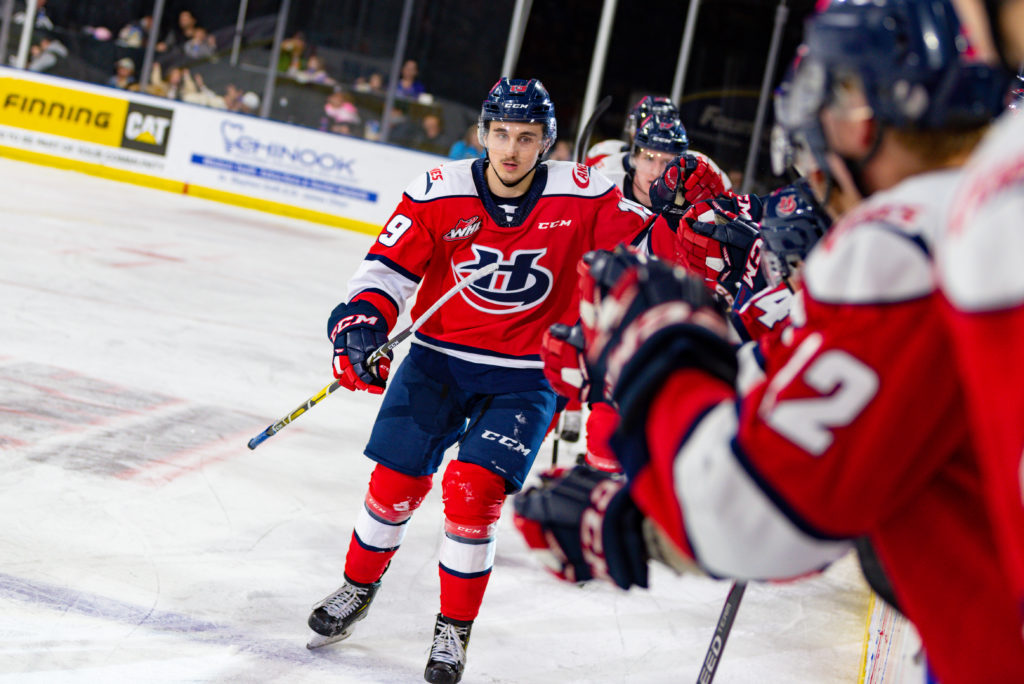 Lethbridge, AB – The Lethbridge Hurricanes earned their fourth straight victory on Saturday as they earned a 5-4 overtime against the Moose Jaw Warriors at the ENMAX Centre.

It was a back-and-forth first period that saw the Hurricanes outshoot the Warriors 11-10. Moose Jaw opened the scoring as former Hurricane forward Jadon Joseph – who played in his 200th WHL game Saturday – potted his sixth goal of the season just 3:03 in to make it 1-0. Less than a minute later, the Hurricanes evened the score as Dylan Cozens scored his team-leading eighth goal of the campaign to make it 1-1. After a pair of Moose Jaw goals by Eric Alarie and Owen Hardy, the ‘Canes answered back as Oliver Okuliar scored his fifth of the season to make it a 3-2 game after twenty minutes of play.

The Hurricanes were very strong in the middle frame as they peppered the Warrior goaltender Bailey Brkin with 18 shots while just surrendering six against. Dino Kambeitz scored on a breakaway at the 5:42 mark to tie the game 3-3 before Noah Boyko scored his third of the season to put Lethbridge ahead just two minutes later. Moose Jaw tied the game at 4-4 as Joseph redirected a point shot by Carl Tetachuk as the game was tied after two periods of play.

In the third period, both teams had chances to pull ahead but both Tetachuk and Brkin closed the door. Lethbridge outshot Moose Jaw 10-8 in the third period. The game went to overtime and on the only shot in the extra frame, Logan Barlage snapped home his second goal of the season to lift the ‘Canes to a 5-4 victory.

The Hurricanes outshot the Warriors 40-24 in the game. Lethbridge went 0/1 o the power play while Moose Jaw was 1/1 with the extra man.

The victory for the Hurricanes was their fourth straight win as they improve to 3-2-0-1 on home-ice and 7-4-0-1 on the season. The ‘Canes have also won three straight games at the ENMAX Centre.

The Hurricanes will visit the Red Deer Rebels on Tuesday before returning to the ENMAX Centre for a pair of weekend games against the Brandon Wheat Kings on Friday and the Medicine Hat Tigers on Saturday. Tickets can be purchased online at www.enmaxcentre.ca, by calling 403-329-SEAT (7328) or by visiting the ENMAX Centre Ticket Centre.