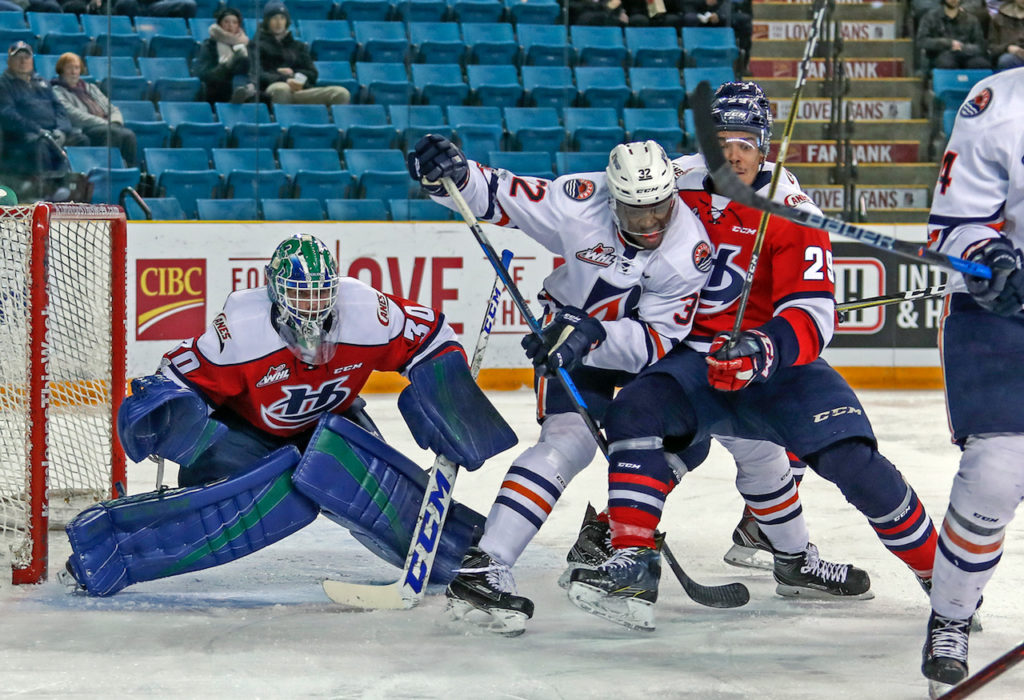 Kamloops, BC – The Lethbridge Hurricanes began a five game BC road trip on Tuesday as they extended their winning streak to four games defeating the Kamloops Blazers by a 4-2 score at the Sandman Centre.

The Hurricanes started the game with a bang as Dylan Cozens, who was named the WHL On The Run Player of the Week last week, continued his hot hand as he flipped a puck forward for Taylor Ross who broke in and deked Dylan Ferguson and slipped home his 13th of the season to make it 1-0 just 1:23 into the hockey game. Blazers received a power play 3:38 into the game and generated some momentum as they fired away at Logan Flodell as Kamloops, who failed to score on the man advantage, had 16 shots on goal in the before the nine minute mark of the period. The ‘Canes added a late goal with 2:15 left in the period as Brad Morrison registered his 15th of the season and 100th career goal slipping one through the five-hole of Ferguson to make it 2-0 Lethbridge after twenty minutes of play.

The Hurricanes leveled the playing field in the second period as both the ‘Canes and Blazers directed ten shots on goal in the middle frame. The ‘Canes added to their lead in second period when Zane Franklin scored his 12th of the season, and first of two in the game, at the 12:36 mark as he redirected a centering pass by Jordy Bellerive passed Ferguson to make it 3-0 Lethbridge; Morrison picked up the second assist. Late in the period, Matthew Stanley was assessed a penalty that carried over to the third period.

As the penalty expired, the Blazers were able to get on the board as Jermaine Loewen scored his 19th of the season just 1:06 into the period on a wraparound to make it a 3-1 game. Loewen struck again as he redirected a Joe Gatenby point shot by Flodell to pull Kamloops to within one with his team-leading 20th goal of the season. The Blazers pulled the goaltender late in hopes of a game-tying goal but Franklin sealed the victory as he potted his second of the night into the empty net.

The win for the Hurricanes extends their winning streak to four games while improving their overall record to 21-19-3-0 on the season. It was also the ‘Canes second straight road victory improving their road record to 8-11-1-0.

The ‘Canes continue their trip on Wednesday when they travel to Kelowna to face the BC Division leading Rockets at 8:00pm Mountain Time before visiting Prince George for a back-to-back against the Cougars on Friday and Saturday.