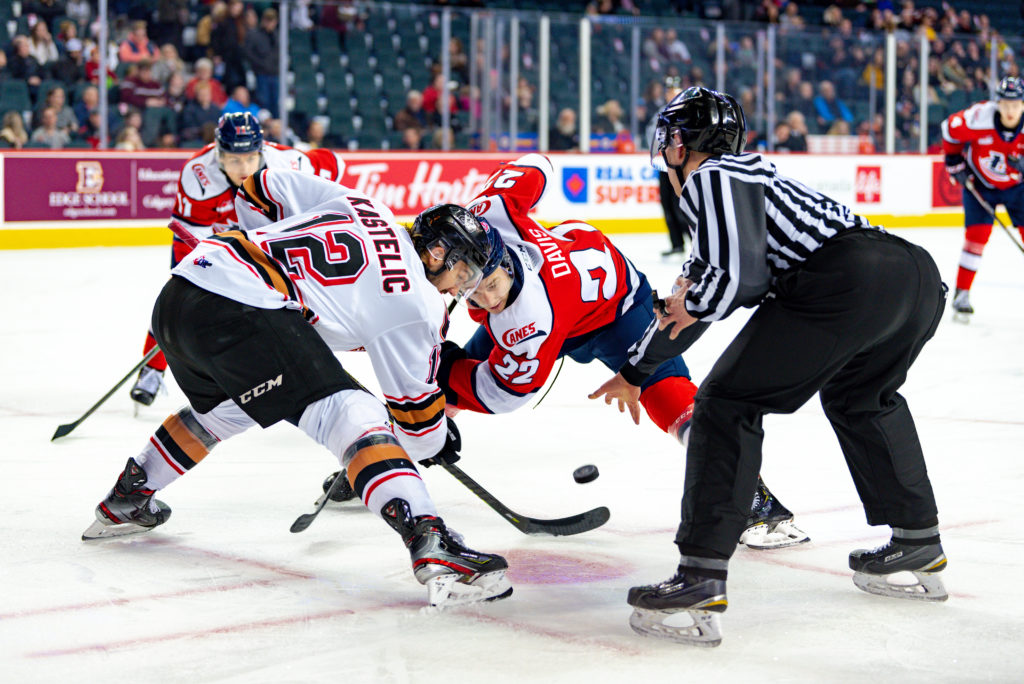 Calgary, AB – The Lethbridge Hurricanes began the post trade deadline portion of the schedule on Friday with a 4-2 win over the Calgary Hitmen at Scotiabank Saddledome.

The Hurricanes received a boost back in their line-up as Oliver Okuliar returned after missing eight games while representing Slovakia at the World Junior Championship in the Czech Republic while newly acquired overage player Brett Davis made his Hurricanes debut.

The ‘Canes had a strong start to the game as Noah Boyko ripped home his 10th goal of the season just 1:16 into the game to make it 1-0; Jett Jones earned the lone assist on the goal. Calgary answered back just 2:18 later as Josh Prokop finished off a two-on-one to make it a 1-1 game. Okuliar – who leads the team in goals with 23 – thought he had scored his 24th but the goal was waived off due to a high-stick as the game remained tied after twenty minutes of play. Lethbridge outshot Calgary 14-11 in the first period.

The Hurricanes and Hitmen skated to a scoreless second period as they both had eight shots on goal. Calgary thought they had taken the lead when a puck deflected off a ‘Canes skate toward the goal; Hitmen celebrated as if they had scored but after a review it was ruled no-goal as the game stayed 1-1. Lethbridge had the first power play opportunity of the game midway though the second period but failed to capitalize despite three shots on goal as the game remained tied after forty minutes of play.

In the third, the ‘Canes broke a 1-1 tie early with a power play goal by Dino Kambeitz just 1:52 into the final frame as he redirected a Koletrane Wilson point shot to make it 2-1; Boyko earned the second assist on the goal. Calgary once again tied the game on a power play goal by Riley Stotts just under five minutes later to make it a 2-2 game. Lethbridge pulled ahead for a third time when Alex Cotton beat Brayden Peters with a slap shot from the blue line to put Lethbridge in front 3-2 with his 12th goal of the year; Davis and Okuliar earned the assists on the goal – the assist for Okuliar extending his point-scoring streak to eight-straight games going back before the World Juniors. Okuliar iced the game with his tea-leading 24th goal of the season in the empty-net with just 16.7 seconds left in the game to make it a 4-2 final.

Shots in the third period favoured the Hurricanes 12-5 as they outshot the Hitmen 34-24 in the contest. Lethbridge went 1/4 on the power play while Calgary went 1/2 with the extra man.

The win for the Hurricanes ends a two-game overtime losing streak as they extend their point streak to six straight games going 4-0-2-0 in that span. The ‘Canes earned their 13th road victory on the year improving the away record to 13-5-0-1 and their overall record to 24-10-2-5 on the season.

The Hurricanes return to the ENMAX Centre on Saturday when they welcome the Swift Current Broncos at 7:00pm. Tickets can be purchased online at www.enmaxcentre.ca, by calling 403-329-SEAT (7328) or by visiting the ENMAX Centre Ticket Centre.