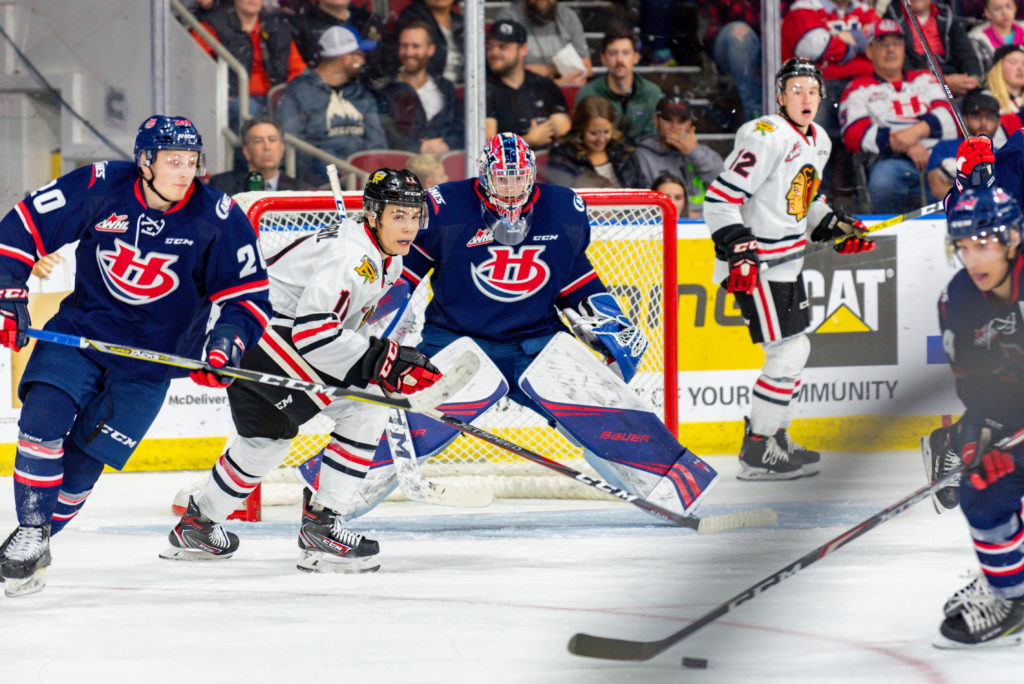 Lethbridge, AB – The Lethbridge Hurricanes finished a two-game home-stand on Friday night with a come-from-behind 4-2 win over the Portland Winterhawks at the ENMAX Centre.

It was a fast-paced first period that saw the Winterhawks come out of the gate strong. Portland opened the scoring just 12 seconds into the game as Johnny Ludvig blew a point shot by ‘Canes goaltender Bryan Thomson to make it 1-0; Robbie Fromm-Delourme and Jake Gricius earned the assists on the goal. Both teams had a power play opportunity in the opening frame, but neither capitalized as the ‘Hawks led 1-0 after twenty minutes. Portland held the edge in shots 9-6.

The animosity picked up in the second period between the two teams after a shorthanded goal by Portland’s Nick Cicek to make it 2-0 for the Winterhawks at the 6:57 mark. The Hurricanes got their first of the game just under six minutes later, also shorthanded, when D-Jay Jerome scored his second of the campaign to cut the Portland lead to one. After the Hurricanes killed a Chase Wheatcroft penalty, the first-year ‘Cane was sprung on a breakaway out of the penalty box and made no mistake scoring his first Western Hockey League goal to tie the game 2-2. Late in the period, the ‘Canes received a power play and Dylan Cozens snapped home his team-leading fifth goal of the season to make it a 3-2 Lethbridge lead after forty minutes; Alex Cotton and Alex Thacker earned the assists on the go-ahead goal.

In the third period, the Hurricanes outshot the Winterhawks 10-6. Portland forced the issue looking for a game-tying goal as they pulled the netminder late in the period but could not solve Thomson who stood tall. The ‘Canes sealed the win with an empty-net goal by Zack Stringer to make it a 4-2 final.

The Hurricanes outshot the Winterhawks 26-20 on the night. Lethbridge went 1/7 with the extra man while going 5/5 on the penalty kill.

The win for the Hurricanes was their first this season at the ENMAX Centre as it improved their home-ice record to 1-2-0-1 at home and 3-2-0-1 on the season.

The Hurricanes will begin a four-game road trip next Friday when they visit the Prince Albert Raiders. ‘Canes will be back at the ENMAX Centre on Friday, October 18th when they host the Regina Pats. Tickets can be purchased online at www.enmaxcentre.ca, by calling 403-329-SEAT (7328) or by visiting the ENMAX Centre Ticket Centre.