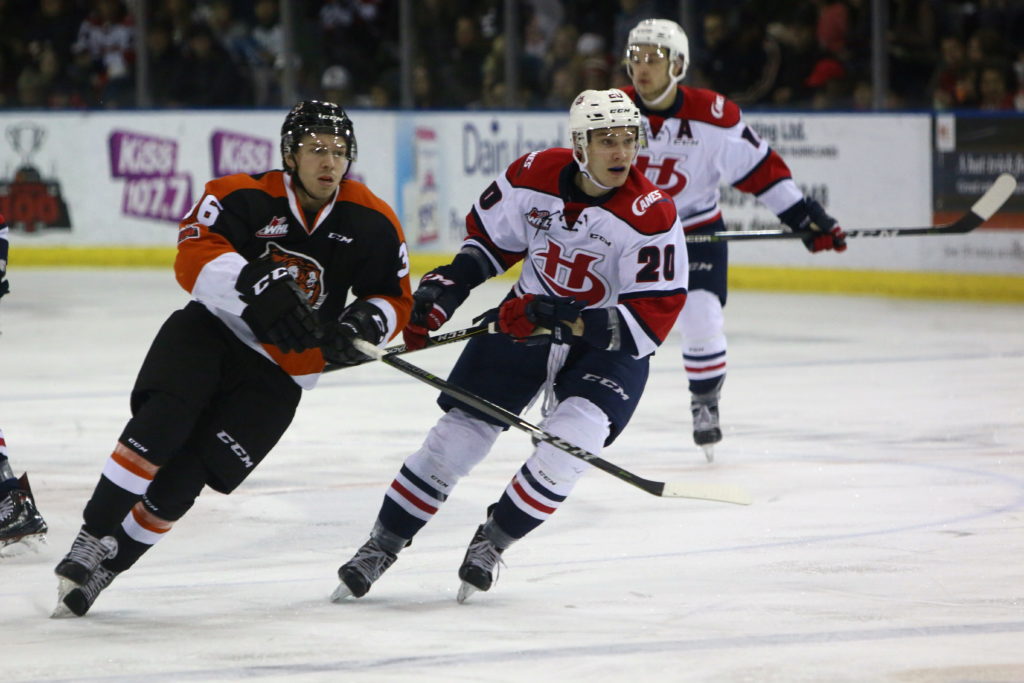 Lethbridge, AB – The Lethbridge Hurricanes played their final regular season home game on Friday at the ENMAX Centre as they were handed a 4-2 loss to the Medicine Hat Tigers in front of a sellout crowd.

The Hurricanes played a very strong first period as they had countless chances to open the scoring but could not solve Tigers goaltender Michael Bullion early in the game despite three power plays in the first period. The ‘Canes appeared to score the first goal with just 1:04 left in the opening frame when Jake Elmer backhanded one home; it was signaled a goal but on review it was disallowed as the game was scoreless after twenty minutes of play. Shots favoured the Hurricanes 13-10 in the first period.

The ‘Canes did open the scoring 4:36 into the second period as Calen Addison blasted home his 11th of the season to make it 1-0 Lethbridge; Jadon Joseph earned the lone assist on the goal. Tigers responded on a weird goal at the 12:13 mark as Josh Williams had a puck pinball in off his chest to tie the game 1-1 after forty minutes of play. The ‘Canes were outshot 12-11 in the middle frame.

Just 16 seconds into the third period the Tigers pulled ahead as Bryan Lockner redirected his 14th goal of the season passed Logan Flodell to make it 2-1 Medicine Hat. The ‘Canes answered to tie the game as Jordy Bellerive snapped a seven-game goalless drought at the 11:41 mark to pull the game even at 2-2; Addison and Dylan Cozens earned the helpers. Medicine forged ahead against at the 17:23 mark as Ryan Chyzowski buried his 21st of the year to make it 3-2 before Tyler Preziuso rounded out the scoring with an empty-net goal to make it a 4-2 final.

The Hurricanes were outshot 17-6 in the third period and 39-30 in the hockey game. The ‘Canes power play went 0/5 on the night while the penalty kill was 2/2.

The loss for the Hurricanes extended their losing streak to eight straight games as they fall to 32-33-6-0 on the season.

Despite the loss, the Hurricanes clinched home-ice advantage in the first round of the playoffs against the Red Deer Rebels as they were handed a 6-2 defeat to the Kootenay Ice.

The Hurricanes will wrap up the regular season on Saturday night in Medicine Hat against the Tigers at the Canalta Centre at 7:30pm. The ‘Canes will open the playoffs on Friday, March 23rd in Game 1 against the Rebels at the ENMAX Centre. Tickets for the post-season will go on sale to the general public on Monday at 9:00am and can be purchased online, by calling 403-329-SEAT (7328) or by visiting the ENMAX Centre Ticket Centre.