Hurricanes Doubled 6-3 by Blazers on Friday 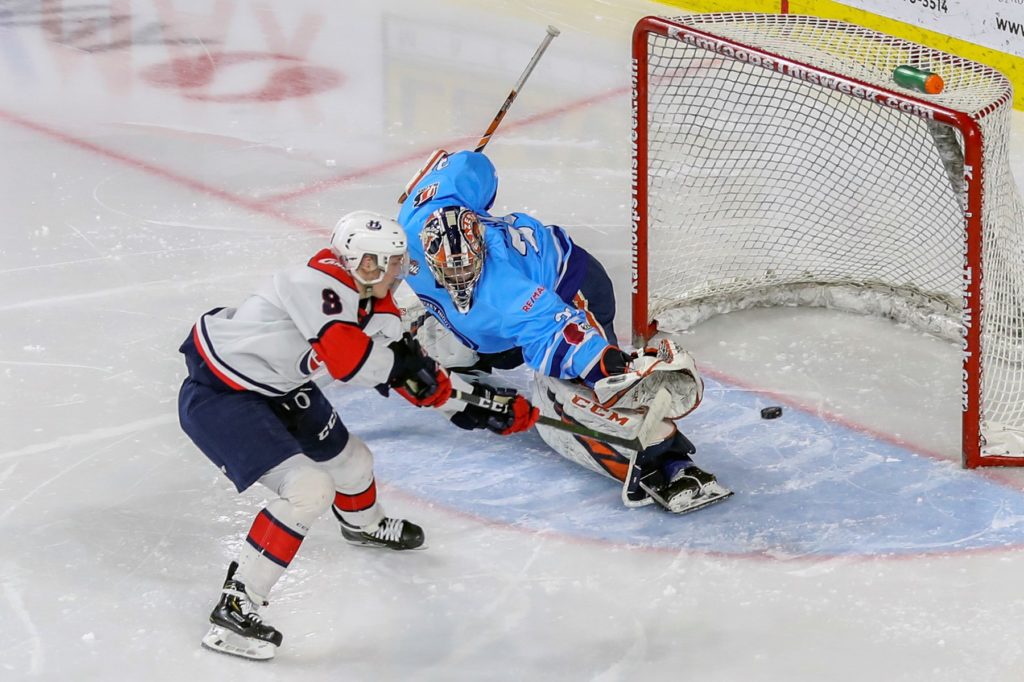 Kamloops, BC – The Lethbridge Hurricanes played the middle of a three-game BC Division road trip on Friday as they were downed 6-3 by the Kamloops Blazers.

It was a fast-paced first period that saw the teams combine for three goals and 28 shots. The Blazers opened the scoring when Orrin Centazzo struck for his team-leading 43rd goal of the year just 3:14 into the game; Libor Zabransky and Zane Franklin earned the assists on the goal. Just 1:01 later, Kamloops doubled their lead when Connor Zary scored his 35th goal of the year. Just 35 seconds after Kamloops made it 2-0, the former Blazer Trevor Thurston scored his fifth of the season in his return to the Sandman Centre to cut the lead to 2-1; Brett Davis earned the lone assist on the goal. The Hurricanes were outshot 19-9 in the first period as the Blazers led 2-1 after twenty minutes of play.

The Hurricanes tied the game early in the second period. Oliver Okuliar scored his 33rd goal of the year on a breakaway as they deked to the back-hand before lifting it over the glove of Blazer goaltender Dylan Garand for an unassisted goal to tie the game 2-2 just 1:05 into the middle frame. Kamloops pulled back ahead when Zary scored his second of the game – and 36th of the year – at the 12:07 mark to put the Blazers back on top 3-2. Lethbridge had chances to once again tie the game, including a Dylan Cozens breakaway, but the ‘Canes couldn’t tie as they trailed 3-2 after forty minutes of play. Lethbridge outshot Kamloops 9-8 in the middle frame.

In the third period, the Hurricanes tied the game for the second time with an early power play goal by Alex Cotton as he ripped home his 19th goal of the year just 4:21 into the period to tie the game 3-3; Dylan Cozens and Callen Addison earned the assists on the goal. Kamloops pulled back ahead with a power play goal of their own as Ryan Hughes scored his first of two in the game to make it a 4-3 Blazer lead. The ‘Canes pulled the goaltender late in the game in hopes of tying the game but the Blazers would score a pair of empty-net goals – one by Hughes and the other by Zary – to round out the scoring on a 6-3 victory for Kamloops.

The Hurricanes were outshot 12-7 in the third period and 39-25 in the game. Lethbridge went 1/3 with the power play while Kamloops was 1/4 with the extra man.

The loss for the Hurricanes was their second straight as they fall to 3-6-0-0 in their last nine games. The defeat dropped the ‘Canes road record to 20-10-0-1 on the season and their overall record to 37-18-2-5 on the year. The ‘Canes also fall to 4-2-0-1 in the last seven meetings against the Blazers.

The Hurricanes will wrap up their three-game BC trip on Saturday against the Kelowna Rockets at Prospera Place at 8:00pm MT. The Hurricanes will be back at the ENMAX Centre on Friday, March 13th when they welcome the Edmonton Oil Kings at 7:00pm. Tickets can be purchased online at www.enmaxcentre.ca, by calling 403-329-SEAT (7328) or by visiting the ENMAX Centre Ticket Centre.