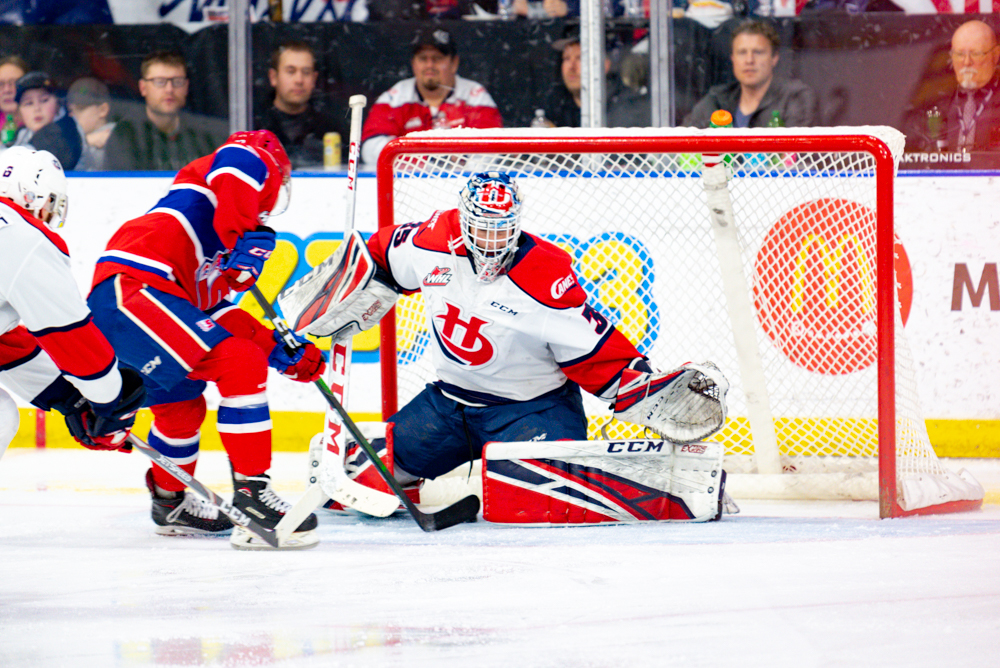 Lethbridge, AB – The Lethbridge Hurricanes began a four-game homestand on Wednesday with a 6-3 loss to the Spokane Chiefs at the ENMAX Centre.

It was a fast-paced first period that saw the Hurricanes and Chiefs trade chances in the early going of the game but both Carl Tetachuk and Lukas Parik stook tall early. Spokane opened the scoring with a power play goal at the 8:54 mark when Bear Hughes banged home a rebound to make it 1-0 for the Chiefs. After Oliver Okuliar hit the crossbar, the Chiefs stormed up ice and Jack Finley redirected an Adam Beckman centering pass to make it 2-0 Spokane after twenty minutes of play. The Chiefs held the edge in shots 13-10 in the first period.

The Chiefs added to their lead just 6:55 into the second period as Luke Toporowski scored his 21st of the season finishing off a centering pass by Leif Mattson to make it 3-0 for Spokane. The Hurricanes found their legs after the third Spokane goal and would get on the board with a power play goal by Logan Barlage – his 20th of the season – to make it 3-1; Alex Cotton drawing his 60th point of the season on goal while Calen Addison earned the other assist on the goal. The ‘Canes continued to pepper Parik and they would pull to within a goal as Zack Stringer backhanded home his ninth of the year with 10.9 seconds left in the period to make it a 3-2 game after forty minutes of play. Lethbridge outshot Spokane 23-6 in the second period.

Spokane restored their two-goal lead early in the third period as Beckman scored his first of two goals in the game to make it a 4-2 Chief lead. Just over three minutes later, the Chiefs made it a 5-2 advantage when Toporowski scored his second goal of the game only to see the ‘Canes answer 18 seconds later as Brett Davis scored his 20th goal of the season to make it a 5-3 game. Lethbridge pulled the goaltender with over three minutes remaining in regulation in hopes of mounting a come-back but an empty net goal by Beckman – his fifth point of the contest – sealed a 6-3 win for the Chiefs with 2:26 left in the game.

Shots in the third period favoured Hurricanes 11-9 as they outshot the Chiefs 44-28 in the game. Lethbridge went 1/2 on the power play in the game while Spokane was 1/3 with the extra man.

The loss for the Hurricanes was their third straight regulation defeat as it is just the second time this season the ‘Canes have lost more than two games in a row. The defeat dropped the Hurricanes home-ice record to 15-7-2-4 on the season and their overall record to 34-15-2-5 on the year.

The Hurricanes continue their four-game homestand on Friday as they welcome the Moose Jaw Warriors on WHL Suits Up to Promote Organ Donation presented by RE/MAX at the ENMAX Centre at 7:00pm. Tickets can be purchased online at www.enmaxcentre.ca, by calling 403-329-SEAT (7328) or by visiting the ENMAX Centre Ticket Centre.