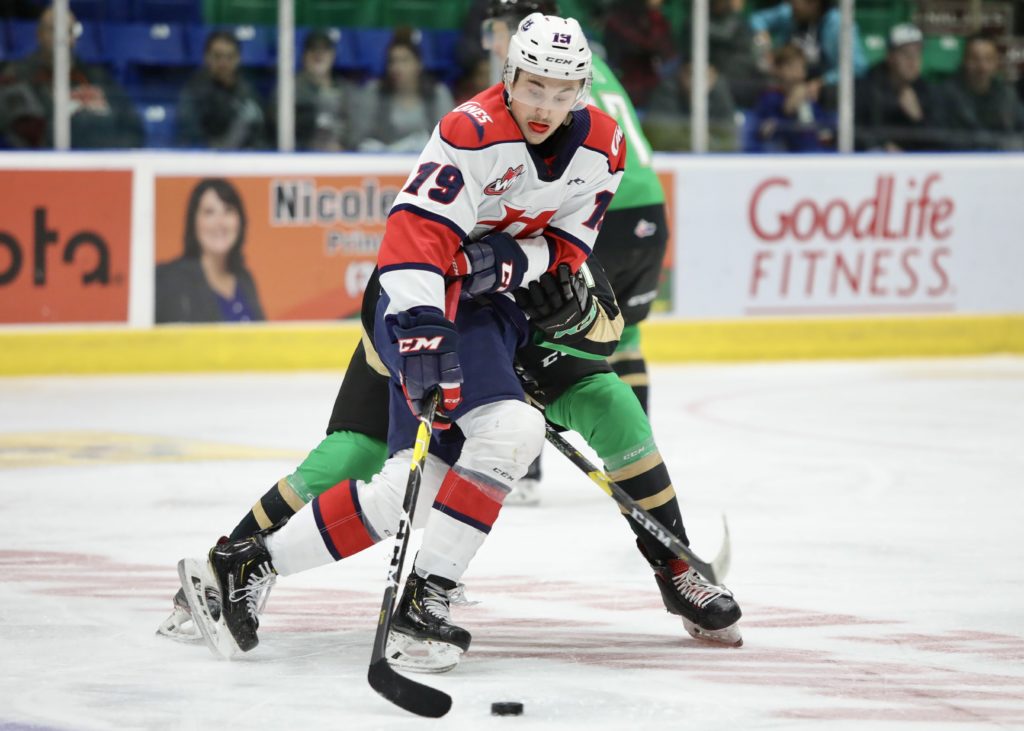 Prince Albert, SK – The Lethbridge Hurricanes started a four-game Saskatchewan road trip with a 4-2 loss in Prince Albert against the Raiders on Friday night at the Art Hauser Centre.

The Hurricanes had a strong first period as they outshot the Raiders 15-8 in the opening frame. Lethbridge had a power play early in the game but could not beat goaltender Boston Bilous who kept the game scoreless early. Despite the good start for the ‘Canes, it was Prince Albert who struck first as Spencer Moe scored his first of the season at the 11:28 mark to make it 1-0. Lethbridge tied the game less than two minutes later as Ty Nash scored his first in the WHL on a two-on-one with Justin Hall to tie the game 1-1 after twenty minutes of play.

The Raiders came on in the second period as they outshot the Hurricanes 12-7 in the middle frame. Prince Albert had a pair of power play chances in the period but the ‘Canes were once again strong on the penalty kill to keep the game tied 1-1. Late in the period, the Raiders were able to pull ahead as Zack Hayes beat a screened Bryan Thomson to give Prince Albert a 2-1 lead after forty minutes of play.

In the third period, the Hurricanes peppered Bilous outshooting Prince Albert 12-5. The ‘Canes tied the game at the 14:21 mark when Koletrane Wilson snapped a 90-game goalless drought with his first of the season to make it a 2-2 game; Dino Kambeitz earned the lone assist on the goal. The tie, however, only lasted 48 seconds as Moe was able to rip home his second of the game at the 15:09 mark to make it 3-2 before Ilya Usau potted an empty-net goal to make it a 4-2 final.

The Hurricanes outshot the Raiders 34-25 in the game. Lethbridge went 0/3 on the power play and 3/3 on the penalty kill.

The loss for the Hurricanes was their first on the road this season dropping their road record to 2-1-0-0 this year. The ‘Canes overall record falls to 3-3-0-1 through seven games.

The Hurricanes continue their four-game road trip next Saturday when they visit the Saskatoon Blades. ‘Canes will be back at the ENMAX Centre on Friday, October 18th when they host the Regina Pats. Tickets can be purchased online at www.enmaxcentre.ca, by calling 403-329-SEAT (7328) or by visiting the ENMAX Centre Ticket Centre.