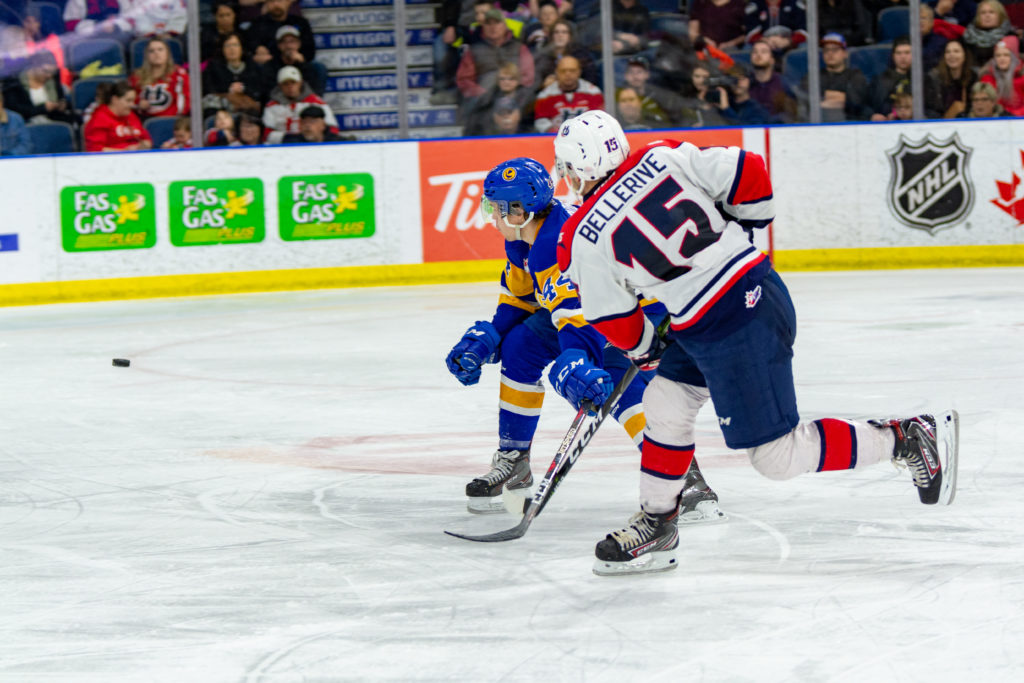 Lethbridge, AB – The Lethbridge Hurricanes played the middle of a three-game in four-night long-weekend as they were handed a 5-2 loss to the Saskatoon Blades at the ENMAX Centre.

The Hurricanes had a great start to the game as they kept the Blades on their heels early and Lethbridge was able to open the scoring for the fifth straight game as Taylor Ross banged home a rebound just 1:20 into the game to make it 1-0 with his 27th of the season; Noah Boyko and Dylan Cozens picked up the assists on the goal. The Blades tied the game as Emil Malysjev had a point shot deflect home to make it 1-1. With just 4.8 seconds left in the period while four-on-four, Nolan Kneen scored on a breakaway to give Saskatoon a 2-1 lead after twenty minutes of play. The Blades led the shots 17-10 in the opening frame.

In the second period, the teams traded goals as the Blades added to their lead when Gary Haden beat Carl Tetachuk with a shot to the glove side to make it 3-1 Saskatoon 9:27 into the middle frame. The ‘Canes answered back as Jake Elmer continued his torrid pace getting his 28th goal of the season just 49 seconds after the Haden goal – Ross and Danila Palivko picked up the assists – as Elmer scored for the fifth straight game to make it 3-2 after two periods. Blades held the edge in shots 15-6 in the middle stanza.

The ‘Canes had a great chance to tie the game early in the third period as Elmer moved in on a two-on-one and ripped one by Nolan Maier but it hit the post to keep it a one goal game for Saskatoon. On the ensuing sequence the Blades headed up ice and Riley McKay would tip home his 12th of the season to make it a 4-2 game. Lethbridge pulled the goaltender late in the game to attempt a come-back but Dach iced the win with an empty-net goal to make it a 5-2 final.

The loss for the Hurricanes ends a two-game winning streak for the ‘Canes as they fall to 6-6-1-1 in their last 14 games. The defeat drops their overall record to 29-17-5-5 on the season. Despite the loss, the Hurricanes remain second in the Central Division as Calgary defeated Medicine Hat, so the ‘Canes remain second in the division with 68 points.

The Hurricanes will travel to Cranbrook on Monday to face the Kootenay Ice at 2:00pm before returning to the ENMAX Centre on Friday to begin a home-and-home with the Medicine Hat Tigers at 7:00pm. Tickets can be purchased online at www.enmaxcentre.ca, by calling 403-329-SEAT (7328) or by visiting the ENMAX Centre Ticket Centre.