Hurricanes Downed 8-7 in Overtime by Americans 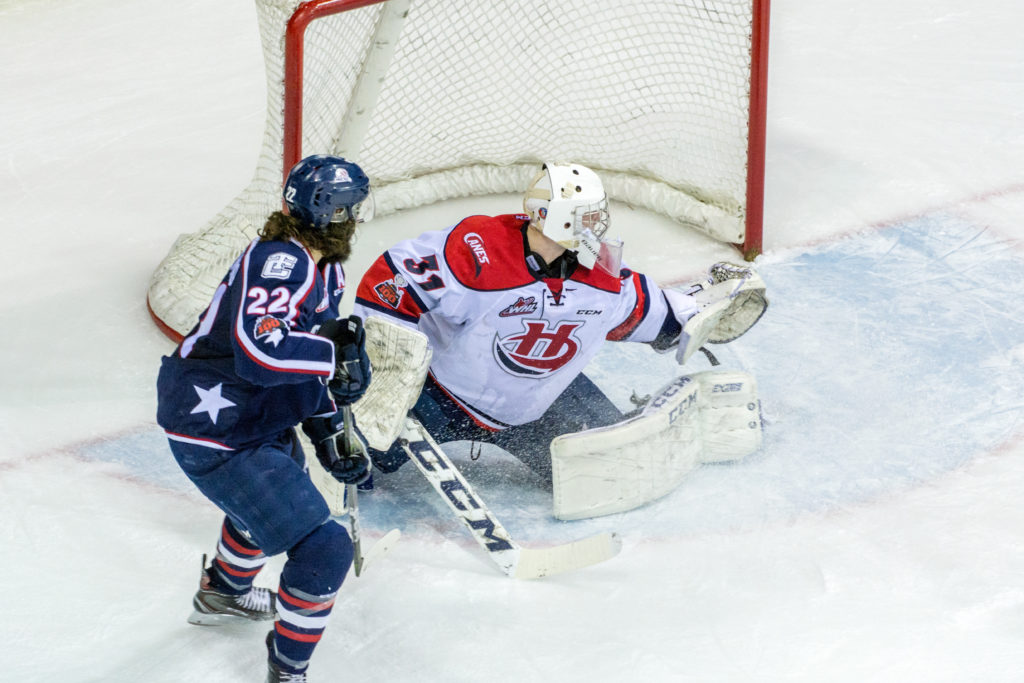 Kennewick, WA – The Lethbridge Hurricanes ended a three-game in four night road trip with an 8-7 overtime loss on Saturday in Kennewick to the Tri-City Americans.

It was a fast-paced first period that saw chances early for both teams as the game had a playoff-feel in the opening twenty minutes. Lethbridge opened the scoring at the 9:33 mark as Jake Elmer moved in on the left-wing and ripped home his 13th goal of the season to make it 1-0; Dylan Cozens drew the lone assist on the goal. The ‘Canes added to their lead with just 20.9 seconds left in the opening period as Cozens had one bounce in off him and passed the Tri-City goaltender Beck Warm to make it 2-0; Taylor Ross and Nick Henry earned the assists on that goal. Lethbridge held the edge 2-0 after twenty minutes and outshot the Americans 13-10.

Early in the second period, Igor Merezhko was assessed an interference penalty and the Americans would strike just 1:39 into the period on the man advantage as Kyle Olson sniped his sixth goal of the season to cut the Lethbridge lead in half to 2-1; Aaron Hyman and Krystof Hrabik earned the assist on the Teddy Bear Toss goal for the Americans. The Americans tied the game just four minutes later as Nolan Yaremko scored his 14th of the season before he potted another to put Tri-City ahead 3-2. Lethbridge tied the game just 1:05 after the Americans took the lead as Jordy Bellerive rifled home his 12th of the year at the 9:03 mark to make it 3-3; Jake Leschyshyn scored the lone assist on the goal. Tri-City struck again on a power play – their third power play goal in the period – at the 16:22 mark as Aaron Hyman snapped one home from the line to make it 4-3 before Riley Sawchuk potted his ninth of the season just 18 seconds later to make it 5-3 as the Americans scored five times in the middle frame and led 5-3 after forty minutes of play. Shots in the second period favoured Tri-City 18-10.

In the third period, the Hurricanes pulled to within one as Leschyshyn potted his 19th goal of the season at the 6:20 mark on the power play to make it a 5-4 game; Elmer and Ross were credited with the assists on the goal. Tri-City restored their two-goal lead at the 10:26 mark though as Sawchuk scored his second of the game to make it 6-4. Parker AuCoin made it a 7-4 lead for the Americans at the 13:54 mark. The ‘Canes would mount a comeback however as Elmer scored his second of the night at the 14:22 to make it a 7-5 game. Just 37 seconds later, Ross potted his 17th goal of the year to make it a one goal difference. Before the ‘Canes needed to pull the goaltender, Elmer completed his hat-trick with 2:11 to go in regulation to make it a 7-7 game sending it to overtime.

In overtime, both teams would have one shot on goal but it was the Americans who would end the game with a goal as Isaac Johnson ripped home his 12th of the season just 1:10 into the extra session to lift Tri-City to a crazy 8-7 overtime win over the Hurricanes.

Final shots favoured the Hurricanes 44-41 in the game. Lethbridge went 1/2 on the power play while Tri-City finished 3/6 with the extra man.

The loss for the Hurricanes is their second straight defeat as they fall to 15-9-4-2 on the season. The ‘Canes posted a 1-1-1-0 record in the three-games on the road trip with their lone win coming in Kootenay against the Ice on Wednesday.

The Hurricanes return to the ENMAX Centre on Wednesday