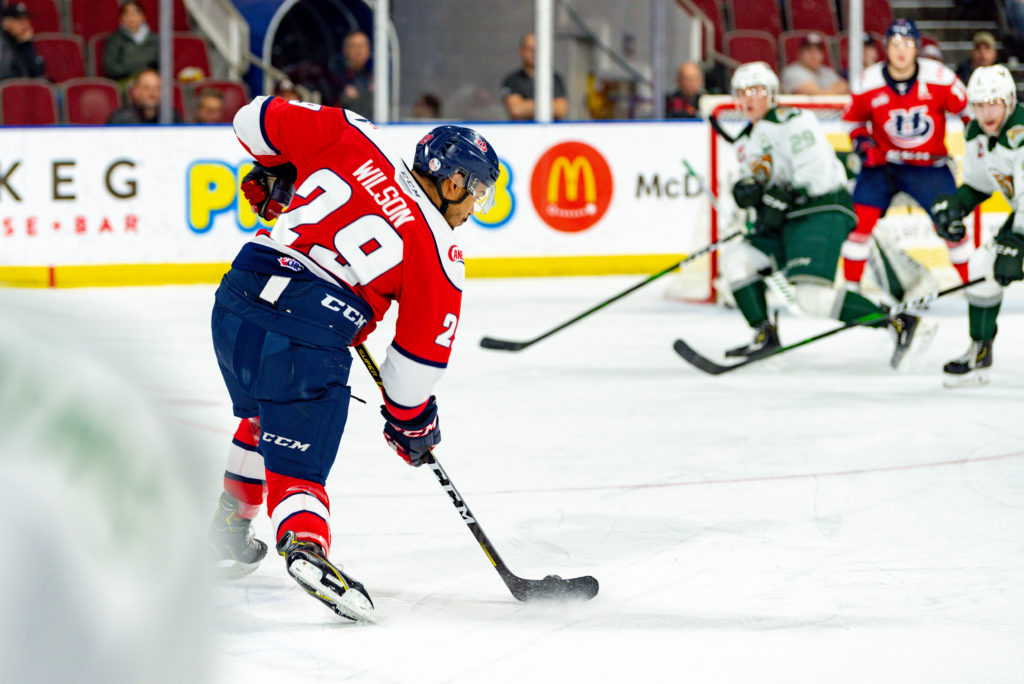 Lethbridge, AB – The Lethbridge Hurricanes dropped their third straight game on Wednesday night as they fell 3-1 to the Everett Silvertips at the ENMAX Centre.

It was a fast start for the Silvertips who jumped out to an early lead when Gage Goncalves scored his 13th goal of the season just 2:35 into the game to make it 1-0. Everett had a few more chances in the first period to build on their lead including a goal post by Bryce Kindopp on a power play but it stayed 1-0 after twenty minutes of play. Everett held the edge in shots 16-6 in the opening frame.

The Hurricanes were outshot in the second period 12-9 but the ‘Canes got the lone goal. After the Silvertips hit a goal post early in the period, Lethbridge was able to strike on the power play when Oliver Okuliar lifted home his league-leading 21st goal of the season to make it 1-1; Logan Barlage and Alex Cotton earned the assists on the goal. Bryan Thomson, who earned the start for the Hurricanes, was strong in the middle frame stopping all 12 shots he faced.

In the third period, the Silvertips struck twice in the opening five minutes as Goncalves scored his second goal of the game just 1:07 into the period to put Everett back in front 2-1. Martin Fasko-Rudas added an insurance goal at the 5:06 mark with his third of the campaign to make it 3-1. The ‘Canes pulled Thomson for the extra attacker but they were unable to beat Dustin Wolf as the ‘Tips hung on to the 3-1 victory.

The Hurricanes were outshot for the second straight game as Everett held the edge 37-24 in the game. Lethbridge went 1/3 on the power play while the Silvertips were 1/4 with the extra man.

The loss for the Hurricanes was their third straight defeat – the first time this season the ‘Canes have dropped three consecutive games. The ‘Canes fall to 7-5-0-3 on home ice and 17-9-0-4 on the season. Lethbridge has now posted a 1-3-0-1 record in their last five games at the ENMAX Centre.

The Hurricanes welcome the Medicine Hat Tigers on Friday in the Canadian Tire Toque and Teddy Toss on Friday at the ENMAX Centre at 7:00pm. Less than 500 tickets remain for Friday’s game but tickets can be purchased online at www.enmaxcentre.ca, by calling 403-329-SEAT (7328) or by visiting the ENMAX Centre Ticket Centre.