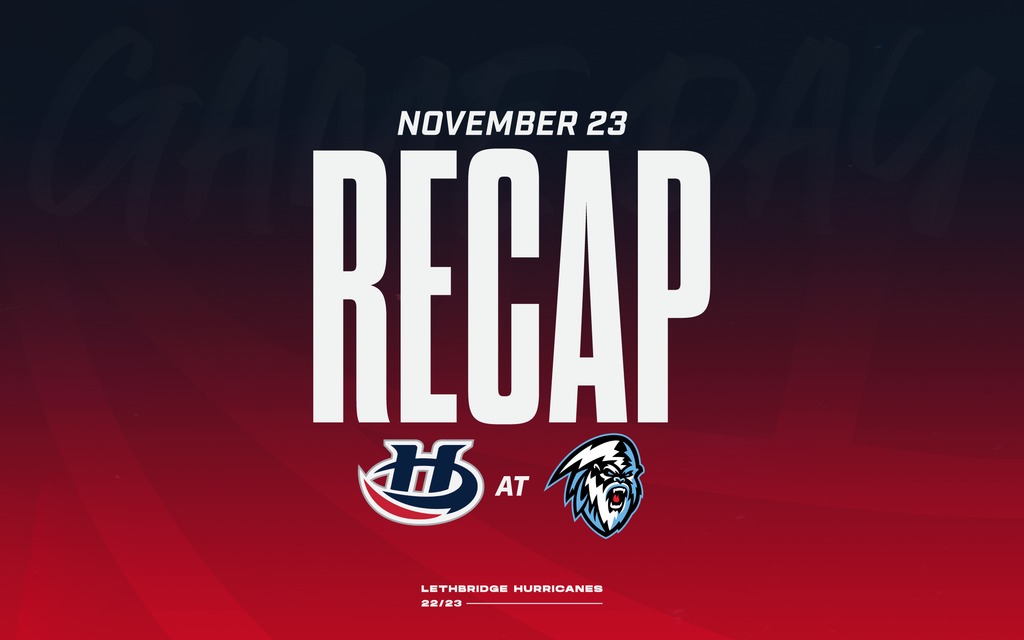 Winnipeg, MB – The Lethbridge Hurricanes played the second of a back-to-back set against the Winnipeg ICE on Wednesday as they dropped a 3-2 decision at Wayne Fleming Arena.

The ‘Canes looked to continue their momentum from Tuesday’s 2-1 victory over the ICE to end Winnipeg’s 15-game winning streak, but it was the home team that would strike first. At the 5:45 mark, overage forward Connor McClennon snapped home his team-leading 17th goal of the season beating Bryan Thomson post-and-in on the glove side to make it 1-0 with a power play goal. The Hurricanes answered back to tie the game at the 13:11 mark as Miguel Marques banged home a rebound to tie the game 1-1; Anton Astashevich and Jett Jones earned the assists on the goal as the game was tied after twenty minutes. Lethbridge outshot Winnipeg 6-4 in the first period.

Lethbridge had a great start to the second period as they peppered ICE goaltender Daniel Hauser early in the frame. The Hurricanes took their first lead of the night at the 4:27 mark when Jett Jones batted a puck out of the air and in for his team-leading ninth goal of the season to make it 2-1; Tyson Zimmer earned the lone assist on the goal. Winnipeg had a power play opportunity late in the frame but failed to strike to tie the game due to a strong kill by the Hurricanes. However, just after the penalty expired, the ICE would tie the game as Ty Nash scored his 10th of the season beating a screened Thomson to tie the game 2-2 after forty minutes of play. Winnipeg held the edge in shots 9-7 in the middle frame.

In the third period, Winnipeg jumped out to a 3-2 advantage when Zach Benson jumped on a Hurricanes miscue behind the net and tucked a loose puck past a scrambling Bryan Thomson just 5:16 into the frame. Lethbridge pushed back late in the frame in hopes of tying the game, but Daniel Hauser stood tall in the ICE net to preserve the 3-2 Winnipeg win.

The shots were tied 8-8 in the third period and 21-21 in the game. Lethbridge went 2/3 on the penalty kill while not being credited with a power play opportunity.

The loss for the Hurricanes dropped their record to 1-1-0-0 in the first two games of their six-game road trip. Lethbridge fell to 7-2-0-1 in their last ten games while slipping to 12-10-0-1 on the season overall.

The Hurricanes will continue their six-game road trip against the Brandon Wheat Kings for a pair of games on Friday and Saturday at 6:00pm MT at Westoba Place.