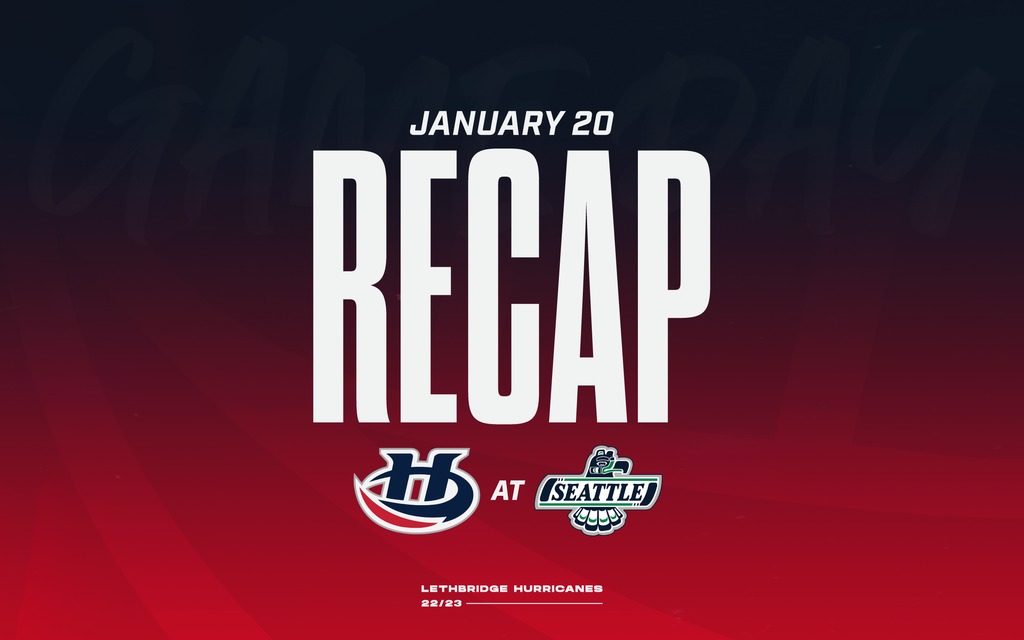 Kent, WA – The Lethbridge Hurricanes continued a three-game US Division road trip on Friday with a 3-2 overtime loss to the Seattle Thunderbirds at accesso ShoWare Center.

The Hurricanes entered on a five-game point streak as they made their first visit to face the Thunderbirds in nearly four years. Lethbridge had a great start to the game outshooting Seattle 7-1 in the early going and had some great chances early to jump out to a lead on a power play, but T-Birds goaltender Scott Ratzlaff made a few good saves to keep the ‘Canes at bay. The Hurricanes opened the scoring at the 7:01 mark as Hayden Smith moved in on the right-wing and rifled home his fifth goal of the season to give the ‘Canes a 1-0 lead; Trae Wilke earned the only assist on the goal. Seattle tied the game on a power play with 6:18 remaining in the period as Jared Davidson ripped home his team-leading 22nd goal of the season to make it a 1-1 game; Gracyn Sawchyn and World Junior Champion Kevin Korchinski picked up the helpers on the equalizer. The Thunderbirds outshot the Hurricanes 10-9 in the opening period which was tied after twenty minutes of play.

It was a fast-paced second period which saw no whistles for the first five-and-a-half minutes of the period. The Hurricanes had a power play opportunity early in the frame but couldn’t solve Ratzlaff. Seattle had an extended offensive-zone shift that spanned over two-minutes which saw the T-Birds hit a goal post before Bryan Thomson – who made his 99th career appearance in the game – made a wonderful point-blank save to keep the game tied. Just moments later on a power play, the Hurricanes pulled ahead as Cole Shepard roofed his 16th goal of the season with just 1:17 remaining in the period to give Lethbridge a 2-1 lead; Tyson Laventure and Logan McCutcheon were credited with the assists on the go-ahead goal. The ‘Canes outshot the Thunderbirds 7-4 in the second period.

Lethbridge had a carry-over power play to start the third period but failed to add to their lead. The Thunderbirds tied the game at the 6:58 mark when Reid Schaefer snapped home his 18th goal of the season beating Thomson glove side on a two-on-one to make it a 2-2 game. The T-Birds continued to press in hopes for their first lead of the game, but Thomson stood tall. The Hurricanes had a great chance in the dying minutes to find another go-ahead goal, but Ratzlaff kept the game tied 2-2 and forced overtime. Seattle outshot Lethbridge 12-7 in the third period.

In the overtime period, Schaefer was sprung on a partial breakaway but was hauled down resulting in a penalty shot. On the ensuing penalty shot, the first-round pick of the Edmonton Oilers lifted a back-hand shot passed Thomson to give the T-Birds the 3-2 win.

The T-Birds outshot the Hurricanes 28-23 in the contest. Lethbridge was 1/5 on the power play while Seattle was 1/4 with the extra man.

The loss for the Hurricanes was their third overtime loss in four games while it extended their point streak to six games having gone 3-0-3-0 in that span. The defeat dropped the ‘Canes road record to 11-8-2-0 on the year while their overall record to 24-15-3-2 on the season.

The Hurricanes will end a four-game road trip on Saturday night when they visit the Portland Winterhawks at 7:00pm MT at the Veteran Memorial Coliseum. The ‘Canes will return home to host the Winnipeg ICE on Friday, January 27th at the ENMAX Centre. Individual game tickets can be purchased in person at the ENMAX Centre Ticket Centre, the Yates Memorial Theatre Ticket Centre, by calling 403-329-SEAT (7328) and online at www.lethbridgehurricanes.com.