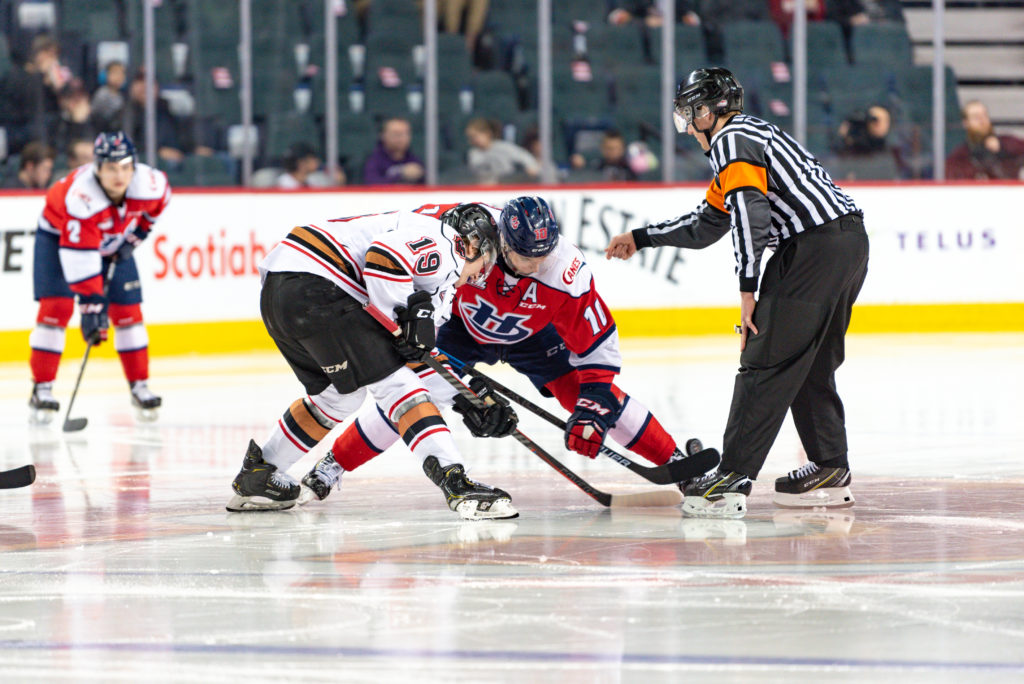 Calgary, AB – The Lethbridge Hurricanes were handed a 5-2 loss Thursday at Scotiabank Saddledome in Game 4 of their first-round best-of-seven series against the Calgary Hitmen as the series is now tied 2-2.

It was a similar start to Game 4 as it was in Game 3 as the Hurricanes controlled the opening two-and-a-half minutes of the game with Ty Prefontaine hitting an early goal post before Calgary capitalized on a favourable bounce at the 3:38 mark to open the scoring when Riley Stotts banked a pass of a ‘Canes defenseman and by Carl Tetachuk to give the Hitmen an early 1-0 lead. Lethbridge had their chances by Jack McNaughton held the fort as Calgary led 1-0 after twenty minutes of play. Shots favoured the Hurricanes 13-9 in the opening frame.

Lethbridge tied the game early in the second period as Jake Elmer scored his first of the post-season at the 1:26 mark to make it a 1-1 tie; Alex Cotton was credited the only assist on the goal. Calgary pulled back ahead when James Malm popped home his first of the playoffs to make it 2-1 for the Hitmen but a power play goal by Logan Barlage at the 12:42 mark tied the game at 2-2; Elmer and Dylan Cozens earned the assists on Barlage’s first of the playoffs. Calgary outshot Lethbridge 16-13 in the middle period.

In the third period, the Hitmen quickly broke the tie as Josh Prokop finished a pass from Carson Focht following a Hurricanes give-away to put Calgary ahead 3-2 just 1:44 into the final twenty minutes. Vladislav Yeryomenko scored his first of the playoffs with a power play at the 5:04 mark to make it 4-2 Hitmen. Lethbridge, for the second game in a row, pulled the goaltender but an empty-net goal for the Hitmen by Luke Coleman sealed the victory for Calgary who evened the series at two-games apiece.

The shots in the third period favoured the Hurricanes 13-10 as they outshot Calgary 39-35 in the game. Lethbridge went 1/5 on the power play while Calgary went 1/4 with the extra man.

The win for the Hitmen evens the best-of-seven series at two-games apiece. The series will now shift back to Lethbridge as the Hurricanes will host the Hitmen in Game 5 on Saturday at 7:00pm at Nicholas Sheran Arena before Game 6 will take place back at Scotiabank Saddledome on Sunday afternoon.

The ‘Canes will be holding a free, family viewing party at Bully’s at the Lethbridge Exhibition Grounds for those that are unable to attend the game. The game can also be seen at Browns Socialhouse locations in Lethbridge and heard on 106.7 ROCK.