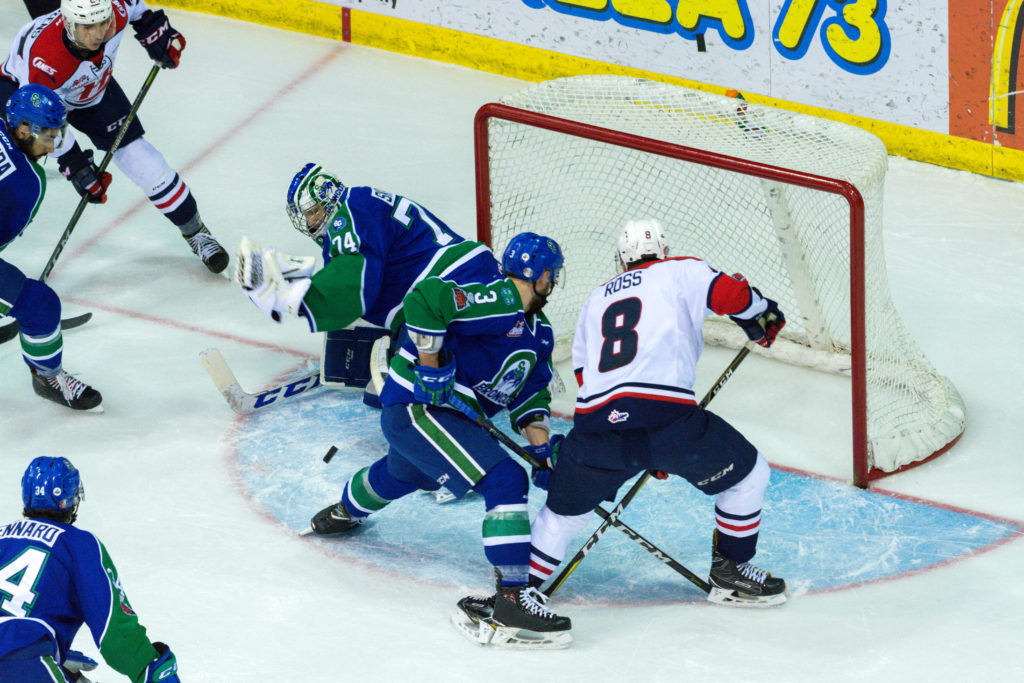 Lethbridge, AB – The Lethbridge Hurricanes evened their best-of-seven Eastern Conference Championship Series with the Swift Current Broncos at two games apiece with their second straight 5-1 victory at the ENMAX Centre.

It was a wild first period that saw numerous excellent saves for both Logan Flodell and Stuart Skinner, along with four goals. The ‘Canes opened the scoring 6:28 into the hockey game as Taylor Ross let a shot go on a rush; Jadon Joseph jammed home a rebound to make it 1-0 Lethbridge. The Hurricanes struck on a power play as Logan Barlage scored his first of the series and fifth of the playoffs at the 14:03 mark; Tate Olson and Zane Franklin drew the helpers. Just 53 seconds later, the Broncos cut the lead in half as Tyler Steenbergen rifled home his 11th of the playoffs before the ‘Canes added another power play goal, this time by Ross, to make it 3-1; Dylan Cozens and Brad Morrison picked up the assists. The Hurricanes outshot the Broncos 14-7 in the opening twenty minutes.

The Hurricanes and Broncos exchanged chances in the second period but both goaltenders stood tall. The Broncos had three power play opportunities that they failed to capitalize on. The ‘Canes had two man advantage opportunities and struck on one of them when Calen Addison slapped home his fifth of the post-season to make it 4-1; Morrison and Jordy Bellerive earned the assists. Shots were even 8-8 in the second period as the ‘Canes had a three-goal lead after forty minutes.

In the third period, the ‘Canes would round out the scoring with yet another power play goal at the 6:57 mark as Addison ripped home his second of the night and sixth of the playoffs to make it 5-1; Bellerive and Tate Olson earned the assists on the goal. The ‘Canes and Broncos would get into penalty trouble late in the game but neither team would add any more goals as the Hurricanes hung on for the win.

The win for the Hurricanes improved their home ice record to 8-0 in the post-season. The ‘Canes have scored five or more goals in seven of their eight home playoff games.

The Hurricanes and Broncos will now shift back to Swift Current for Game 5 on Saturday at the Innovation Credit Union I-Plex at 7:00pm before Game 6 at the ENMAX Centre on Monday at 7:00pm

Tickets for Game 6 will go on sale on Thursday morning at 9:00am and can be purchased online, by calling 403-329-SEAT (7328) or by visiting the ENMAX Centre Ticket Centre.