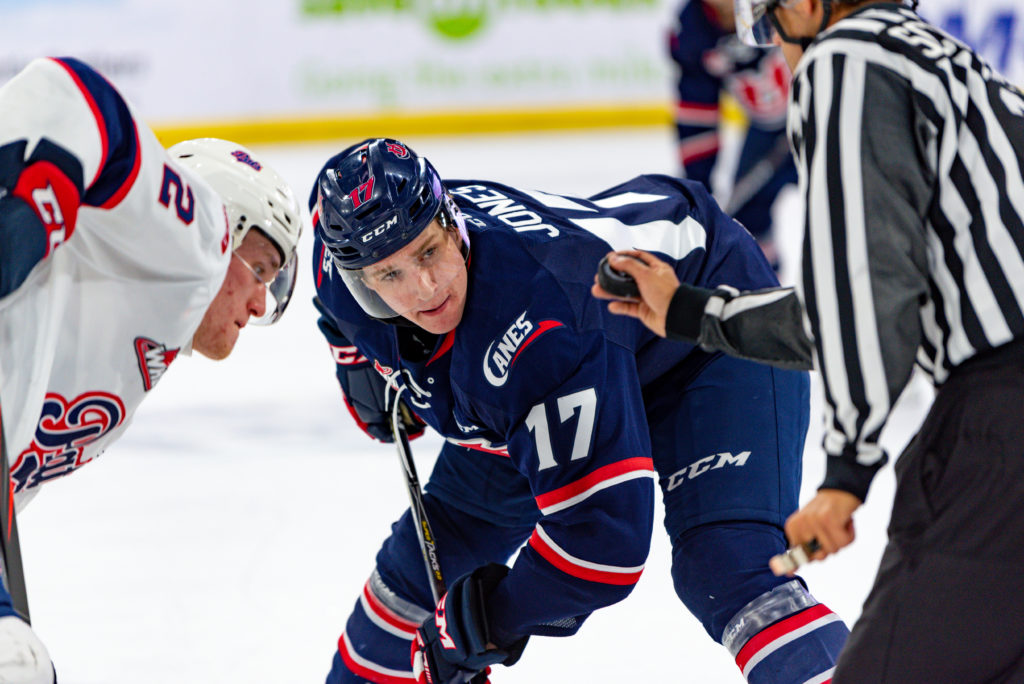 Lethbridge, AB – The Lethbridge Hurricanes returned to the ENMAX Centre on Friday as they earned a 2-1 win over the Regina Pats.

The Hurricanes had a strong start to the game as Jett Jones banged home his first Western Hockey League goal at the 2:03 mark beating Danton Belluk on a backhand-shot to put Lethbridge ahead 1-0; Noah Boyko earned the lone assist on the goal – Boyko now has points in three straight games. The ‘Canes doubled their lead at the 6:40 mark as Calen Addison ripped home his third of the year on a five-on-three power play goal making it 2-0; Dylan Cozens and Oliver Okuliar picking up the helpers. Regina cut the Lethbridge lead to one as Zach Wytinck scored on a power play as the ‘Canes led 2-1 after twenty minutes of play. Pats led the shots 14-8 in the opening frame.

It was a power play filled second period that saw the Pats have four opportunities on the man advantage and the Hurricanes three. Neither team was able to capitalize with the extra man as there was no scoring in the middle frame. The shots were even 8-8 in the second period.

The Hurricanes were outshot 33-21 in the game. Lethbridge went 1/8 on the power play while going 8/9 on the penalty kill.

The win for the Hurricanes was their third straight win and improved their home-ice record to 2-2-0-1 on the year. The victory improved the ‘Canes overall record to 5-4-0-1 on the campaign.

The Hurricanes will be back at the ENMAX Centre on Saturday when they welcome the Moose Jaw Warriors at 7:00pm. Tickets can be purchased online at www.enmaxcentre.ca, by calling 403-329-SEAT (7328) or by visiting the ENMAX Centre Ticket Centre.