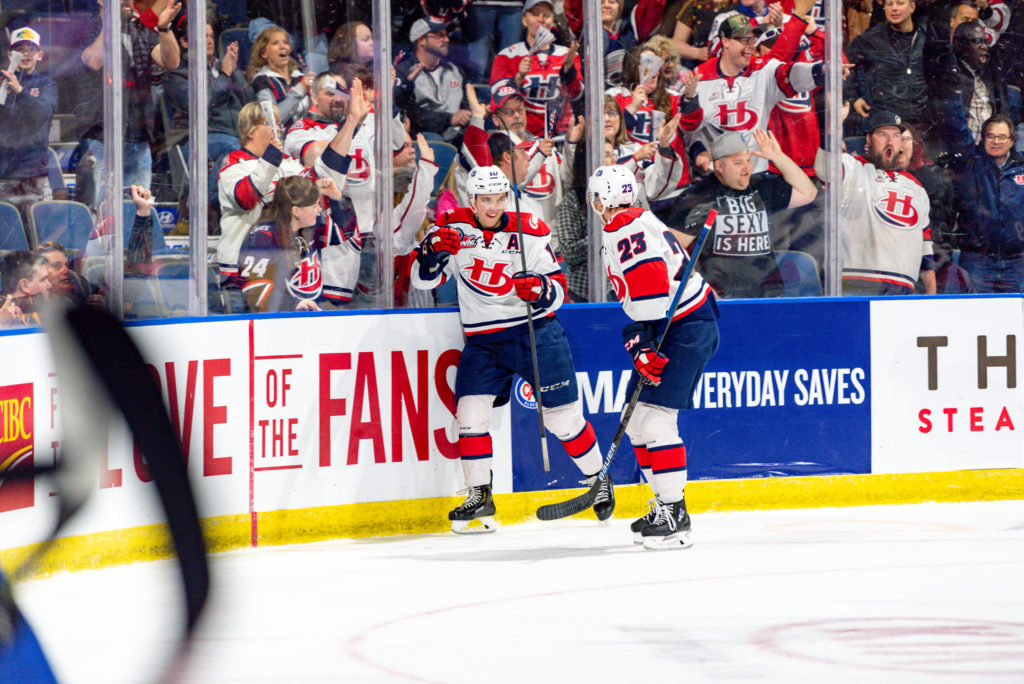 Lethbridge, AB – The Lethbridge Hurricanes played Game 2 of their first round best-of-seven series with the Calgary Hitmen on Saturday as the ‘Canes took a 2-0 series lead with a 4-1 victory at the ENMAX Centre.

The ‘Canes started the game with a bang as just 25 seconds in Nick Henry undressed a Calgary defender before lifting home his second of the playoffs to give Lethbridge an early 1-0 lead; Ty Prefontaine and Koletrane Wilson picked up the assists. Jake Leschyshyn put the ‘Canes ahead 2-0 with a power play goal as he redirected a Calen Addison point-shot by Jack McNaughton; Jordy Bellerive earned the second assist. Before the period was out, Leschyshyn struck again as he popped home his second of the period to make it 3-0 Lethbridge after twenty minutes of play. Shots favoured the ‘Canes 13-8 in the opening period.

The animosity built in the second period between the two teams as both teams upped the physical play resulting in some power plays both ways but neither team was able to capitalize with the extra man. Carl Tetachuk kept the ‘Canes ahead 3-0 with a fabulous save on Cael Zimmerman late in the frame to keep the score in tact after forty minutes of play. Calgary held the edge in shots 12-10 in the middle stanza.

In the third period, the teams traded goals as Leschyshyn completed the natural hat-trick with his third of the game at the 8:57 mark on a power play to make it 4-0; Bellerive and Henry earned the assists on the goal. Calgary broke the shutout bid for Tetachuk as Dakota Krebs had a point shot that was deflected home to make it a 4-1 final.

Final shots in the third period favoured the Hitmen 13-9 as they outshot the ‘Canes 33-32 in the game. Lethbridge went 2/4 on the power play while Calgary was 0/7 with the extra man.

The win for the Hurricanes gives them a 2-0 series lead in the best-of-seven quarter-final series against the Hitmen. The series now shifts to Calgary’s Scotiabank Saddledome for Game 3 and Game 4 on Tuesday and Thursday.

The ‘Canes will visit the Hitmen for Game 3 and Game 4; both games available to be seen at Browns Socialhouse restaurant’s in Lethbridge. Both games will begin at 7:00pm and can be heard on 106.7 ROCK.