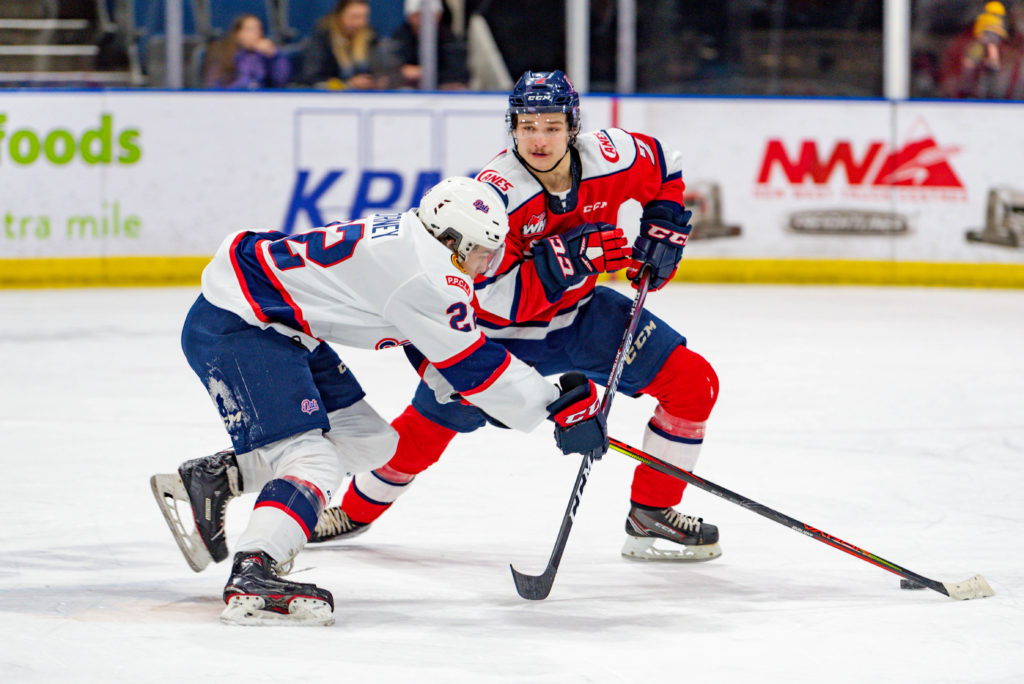 Lethbridge, AB – The Lethbridge Hurricanes won their second straight game on Wednesday with a 4-1 victory over the Regina Pats at the ENMAX Centre.

In the second period, the Hurricanes broke the tie when Dino Kambeitz – who returned after missing two games with injury – beat Max Paddock with his eighth goal of the season on a partial two-on-one at the 10:11 mark to make it 1-0; Dylan Cozens earned the lone assist on the goal. Lethbridge had a chance to add to their lead when D-Jay Jerome hit a goal post but the ‘Canes held the 1-0 lead after forty minutes of play.

The ‘Canes added to their lead early in the third period as Kambeitz scored his second goal of the game just 4:34 into the period making it 2-0; Ty Nash and Ty Prefontaine earned the helpers on the goal. Regina scored a five-on-three power play goal when Zack Smith redirected a Ryker Evans point shot passed Carl Tetachuk to make it a one-goal game with 4:06 left in the contest. Lethbridge restored their two-goal lead when Cozens had a centering pass go off a Pats defender and into the net for his league-leading 18th goal of the season before Oliver Okuliar rounded out the scoring with his league-leading 18th goal of the year to make it a 4-1 final.

The Hurricanes held the edge in shots outshooting the Pats 42-26 in the game. It was the 11th straight game the ‘Canes have outshot the opposition while totalling 40-or-more shots in six of those games. Lethbridge went 0/4 on the power play while Regina was 1/5 with the extra man.

The victory for the Hurricanes extended their winning streak to two straight games as they improved to 17-7-0-3 on the season with the win. The ‘Canes ended a two-game home losing streak with the triumph improving their home-ice record to 7-4-0-2 on the year.

The win, coupled with an Edmonton Oil Kings loss in Kamloops to the Blazers, also means the win propels the Hurricanes into sole possession of first place in the entire WHL standings with 37 points on the season.

The Hurricanes will be back at the ENMAX Centre on Friday when they welcome the Saskatoon Blades on Wawanesa Insurance and 106.7 ROCK Toy Mountain Night at 7:00pm. Tickets can be purchased online at www.enmaxcentre.ca, by calling 403-329-SEAT (7328) or by visiting the ENMAX Centre Ticket Centre.