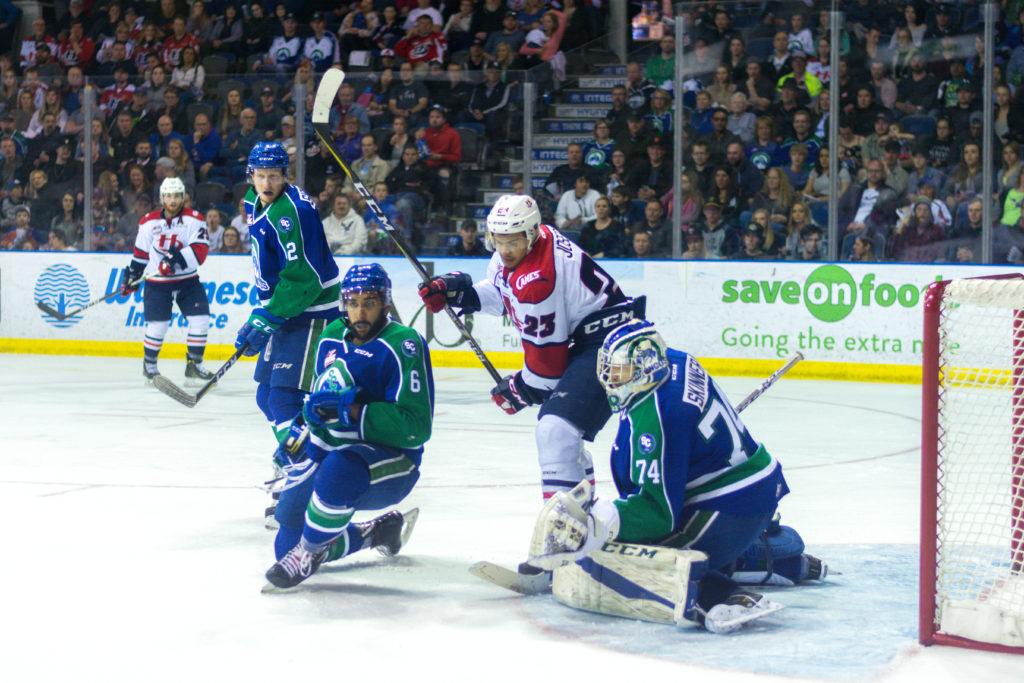 Lethbridge, AB – The Lethbridge Hurricanes returned to the ENMAX Centre on Tuesday for Game 3 of the Eastern Conference Championship Series and earned a 5-1 win in front of over 4,700 fans.

It was a fast-moving opening frame that only saw 11 whistles in the twenty minutes. The ‘Canes had a few good chances early in the game but Stuart Skinner stood tall making his best save on Brad Morrison. The Broncos had some good chances as well in the first period but Logan Flodell stopped all 11 shots he faced while Skinner made eight saves. Neither team had a power play as it was scoreless after one period.

The Hurricanes opened the scoring early in the second period as Dylan Cozens let fly with a shot from the high slot on the power play; Skinner got a piece of the shot with his glove but it fell behind him and into the net for a 1-0 lead – Brad Morrison and Calen Addison picked up the assists on the goal. The Broncos evened the game as Andrew Fyten backhanded home his second of the playoffs. Just 1:06 later, the ‘Canes retook the lead as Morrison snapped home his 13th of the post-season on the power play to make it 2-1 Lethbridge; Addison and Taylor Ross earned the assists on the go-ahead goal. Lethbridge outshot Swift Current 11-7 in the middle frame and held the edge 19-18 after forty minutes of play.

The ‘Canes added to their lead early in the third period as Cozens snapped home his second of the night to make it 3-1 Lethbridge; Ross and Jordy Bellerive earned the assists. Morrison potted his second of the night as he redirected a Koletrane Wilson point shot to make it 4-1; Matthew Stanley picked up the second assist. Morrison completed the hat-trick into an empty net at the 16:12 mark as he sets a new single playoff record with his 15th goal of the playoffs surpassing Kelly Ens who had the record of 14 set in 1990. The ‘Canes would go on to the 5-1 win.

The Hurricanes cut the Broncos series lead in half as the ‘Canes now trail the series 2-1 in the best-of-seven Eastern Conference Championship.

The Hurricanes and Broncos will go head-to-head again on Wednesday in Game 4 of the East Final at 7:00pm at the ENMAX Centre. There are still 1,000 tickets left for Game 4. Tickets for the game are available online, by calling 403-329-SEAT (7328) or by visiting the ENMAX Centre Ticket Centre.