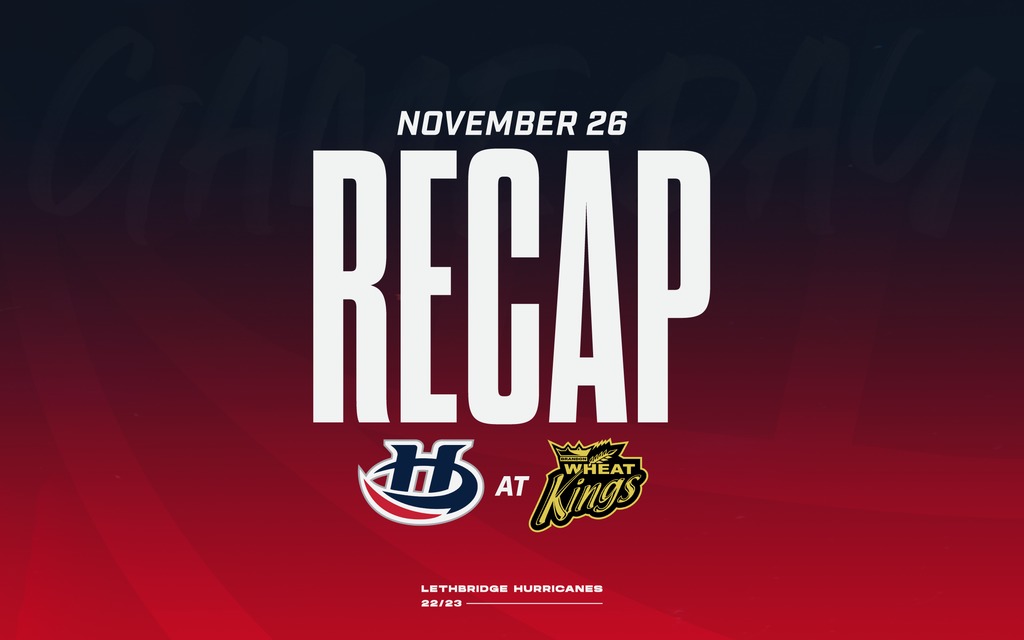 Brandon, MB – The Lethbridge Hurricanes continued their six-game with a 6-4 victory over the Brandon Wheat Kings Saturday at Westoba Place earning Brent Kisio’s 250th career win with the ‘Canes.

The Hurricanes entered after earning a 4-3 victory against the Wheaties on Friday night and had a 2-1-0-0 record in the first three games of their road trip. Lethbridge had another good start to the game striking first for the second straight night as Tyson Laventure ripped home his sixth goal of the season on a power play to make it 1-0; Jett Jones and Logan McCutcheon earned the assists on the goal. The Hurricanes doubled their lead just 2:44 later when Noah Chadwick pinched in from the blueline and buried his second goal of the season to make it 2-0; Anton Astashevich earned the lone assist on the goal. Lethbridge outshot Brandon 11-6 in the first period.

Lethbridge added to their lead early in the second period as Tyson Zimmer – who had an assist in his return to Brandon on Friday – banged home a centering pass from Jett Jones just 31-seconds into the frame for his sixth of the season making it a 3-0 lead for the Hurricanes. Brandon answered with a five-on-three power play just 1:14 later when Nate Danielson extended his point straight to eight-straight games to make it 3-1; Nolan Ritchie and Jake Chiasson earned the assists on the goal. The Hurricanes restored their three-goal lead when Laventure stole the puck from a Wheat King defender to snapped home his second goal of the game on an unassisted goal. Lethbridge had another great opportunity to build on their lead when Logan Wormald ripped a shot off the crossbar midway through the period but it stayed out as the Hurricanes led 4-1 after forty minutes of play.

In the third period, the Wheat Kings pulled to within two goals on a power play goal by Calder Anderson as he ripped one over the glove of Harrison Meneghin to make it a 4-2 Lethbridge lead just 26-seconds into the period. The ‘Canes answered with a power play goal of their own just over three-minutes later when Brayden Edwards scored his first goal since opening night snapping home his second tally of the year from the slot to restore the three-goal lead. However, the Wheat Kings cut the lead to two when Roger McQueen tipped home his second goal of the season to make it a 5-3 game. Brandon pulled to within a goal when Andrei Malyavin struck on one of five third period power plays for the Wheat Kings in the third period as the ‘Canes held a 5-4 lead. Brandon pulled the goaltender for the second straight night looking for an equalizer but Laventure was able to seal the deal netting his third goal of the night for his first WHL hat-trick giving the Hurricanes a 6-4 win.

The Hurricanes outshot the Wheat Kings 31-22 in the contest. Lethbridge was 2/6 with the power play while Brandon went 3/6 with the extra man.

The victory was the 250th career win for Hurricanes head coach Brent Kisio as he became the 40th coach in WHL history to reach the 250-win plateau. Kisio now has a record of 250-164-39 in his time with the Hurricanes.

The Hurricanes will continue their six-game road trip next weekend when they visit the Tri-City Americans and Spokane Chiefs in their first of two trips to the United States this season, and first since the 2018-2019 season.