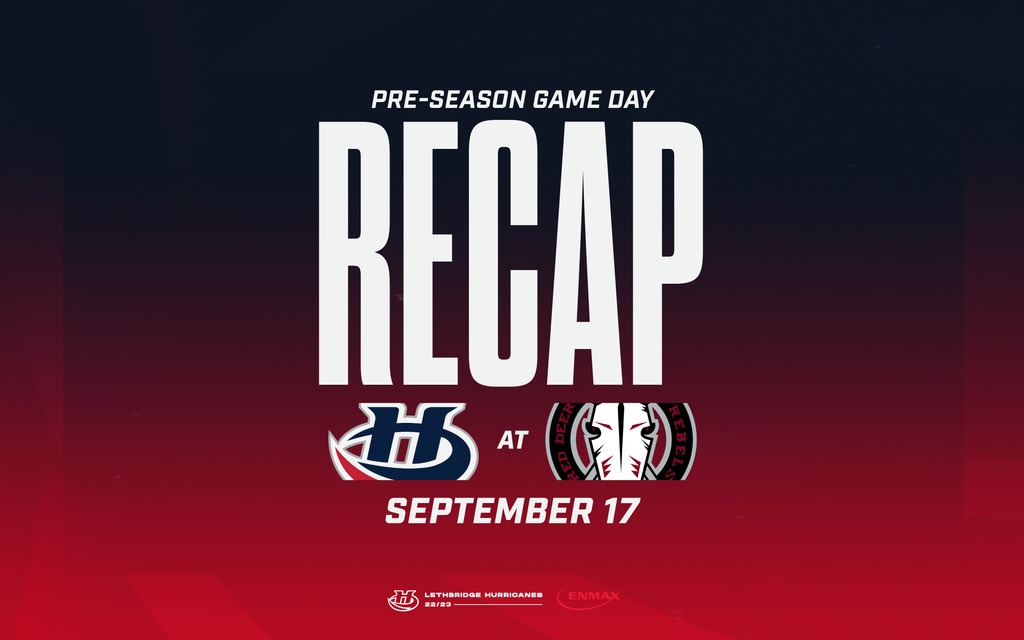 Red Deer, AB – The Lethbridge Hurricanes ended the 2022 ENMAX Pre-Season on Saturday with a 5-4 shootout victory over the Red Deer Rebels at Peavey Mart Centrium.

The Hurricanes started goaltender Harrison Meneghin who stopped 15 of 16 shots he faced in his second appearance of the pre-season which lasted half a game. It wasn’t the start Meneghin was hoping for, however, as the Rebels jumped out to an early lead as Craig Armstrong snuck one home just 1:02 into the game to give Red Deer an early 1-0 lead. The ‘Canes had four power play opportunities in the opening frame, but couldn’t solve Kyle Kelsey in the Rebel goal as Red Deer led 1-0 after twenty minutes. Shots were even 10-10 in the first period.

The power play opportunities continued to pour the Hurricanes way as they would eventually tie the game at the 11:03 mark when Noah Chadwick snapped home his first of the pre-season from the high-slot to make it 1-1; Tyson Laventure and Chase Pauls earned the assists on the goal. Lethbridge outshot Red Deer 15-8 in the second period as the game was tied 1-1 after two periods.

The goal-scoring started to flow in the third period as the teams combined for six goals. The ‘Canes jumped out to their first lead of the night when Dustin Renas banked home his first of the exhibition schedule to make it 2-1 ‘Canes; Kaden Phillips and Tristan Zandee picked up the assists on the goal. Just under five-minutes later, Zandee snapped home his third goal to put Lethbridge up 3-1. Red Deer – who outshot the Hurricanes 14-9 in the period – pulled to within a goal when Quentin Bourne netted his first to make it 3-2 with just over three-minutes remaining. The Hurricanes restored their two-goal lead with 1:35 remaining when Cole Carrier scored his first but the Rebels pushed, scoring twice in the final 67-seconds. Carter Anderson made it a one goal game at the 18:53 mark before Tanner Brown scored off a faceoff to tie the game with just 1.9 seconds left in the period to make it 4-4.

In the overtime period, Red Deer outshot Lethbridge 2-1 but neither team would find a winner as the game went to a shootout. In the shootout, Miguel Marques and Chadwick both struck for the Hurricanes while Brady Smith stopped two of the three Rebels shooters helping the ‘Canes to the win.

Smith made 15 saves in his tour of work through the game as he was credited with the victory.

Lethbridge outshot Red Deer 35-34 in the contest. The Hurricanes were 1/9 with the power play while the Rebels were 0/6 with the extra man.

The victory for the Hurricanes was their second-straight as they end the exhibition schedule with a record of 3-0-1-0, including a 2-0-0-0 record at home and 1-0-1-0 on the road.

Lethbridge will open the 2022-2023 WHL Regular Season on Saturday, September 24th in Medicine Hat at 7:00pm before welcoming the Tigers on Friday, September 30th in the Dairy Queen Home Opener at 7:00pm. Tickets for the home opener can be purchased by visiting the ENMAX Centre Ticket Centre, the Yates Memorial Theatre Ticket Centre, by calling 403-329-SEAT (7328) or online at www.lethbridgehurricanes.com.