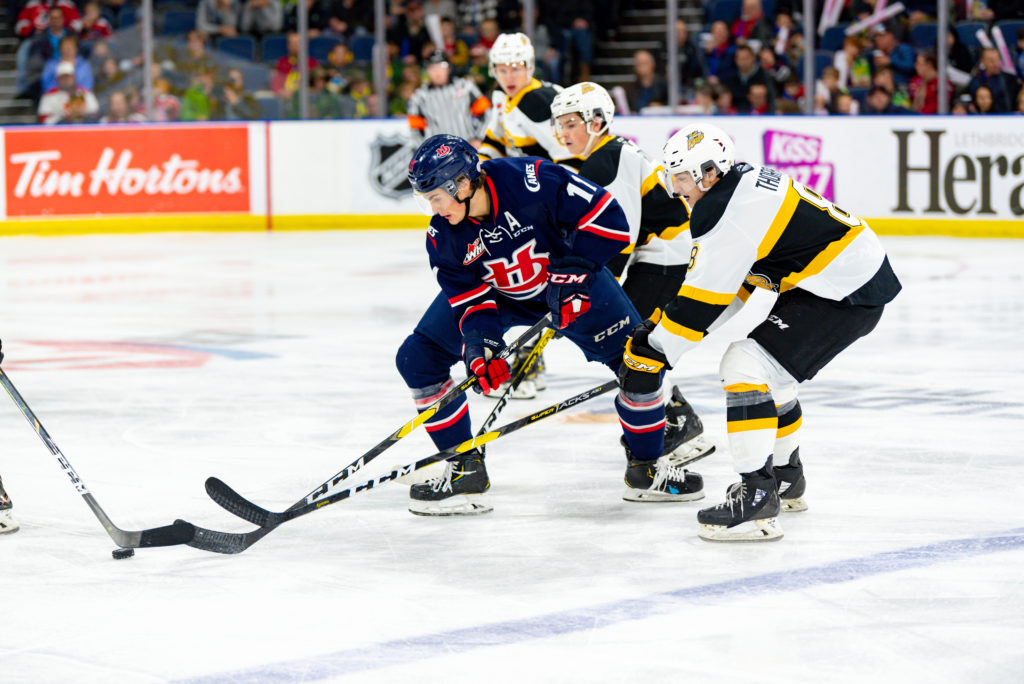 Lethbridge, AB – The Lethbridge Hurricanes earned their sixth straight victory on Friday with a 5-2 win over the Brandon Wheat Kings at the ENMAX Centre.

It was a strong start for the Hurricanes as they jumped on the Wheat Kings early peppering goaltender Ethan Kruger and just three minutes into the game Dino Kambeitz found the net to make it 1-0 early; the goal for Kambeitz extended his goal-scoring streak to three straight games as Koletrane Wilson and Carl Tetachuk earned the assists on the goal. The Hurricanes doubled their lead with a late goal by Jett Jones with just 1:14 left beating a sprawled Kruger to make it 2-0; Danila Palivko and Noah Boyko earned the assists. Lethbridge outshot Brandon 13-10 in the opening frame.

The teams traded goals in the second period. The Wheat Kings outshot the Hurricanes 7-1 in the first half of the period but couldn’t solve Carl Tetachuk who stood tall keeping the ‘Canes ahead. Lethbridge added to their lead as Dylan Cozens scored his ninth goal of the season at the 12:41 mark after an end-to-end rush by Wilson to make it 3-0. Brandon got on the board with a power play goal at the 18:04 mark when Nolan Ritchie scored his first of the season as Lethbridge held a 3-1 lead after two periods.

The Wheat Kings pulled to within one when they scored a shorthanded goal at the 7:41 mark to make it a 3-2 score. Brandon continued to press pulling the goaltender for the extra-attacker but the Hurricanes would score an empty-net goal when Oliver Okuliar scored with 24 seconds left. Before the game was over, the ‘Canes added another when Joe Arntsen beat Kruger for his first WHL goal with 3.3 seconds left in the game to make it a 5-2 final.

The Hurricanes outshot the Wheat Kings 35-27 in the game. Lethbridge went 0/4 on the power play while going 3/4 on the penalty kill.

The win for the Hurricanes improved their winning streak to six straight games while improving their overall record to 9-4-0-1 on the campaign. The ‘Canes have now won four consecutive games at the ENMAX Centre after losing their first three games of the season.

The Hurricanes welcome the Medicine Hat Tigers on Saturday at the ENMAX Centre at 7:00pm. Tickets can be purchased online at www.enmaxcentre.ca, by calling 403-329-SEAT (7328) or by visiting the ENMAX Centre Ticket Centre.