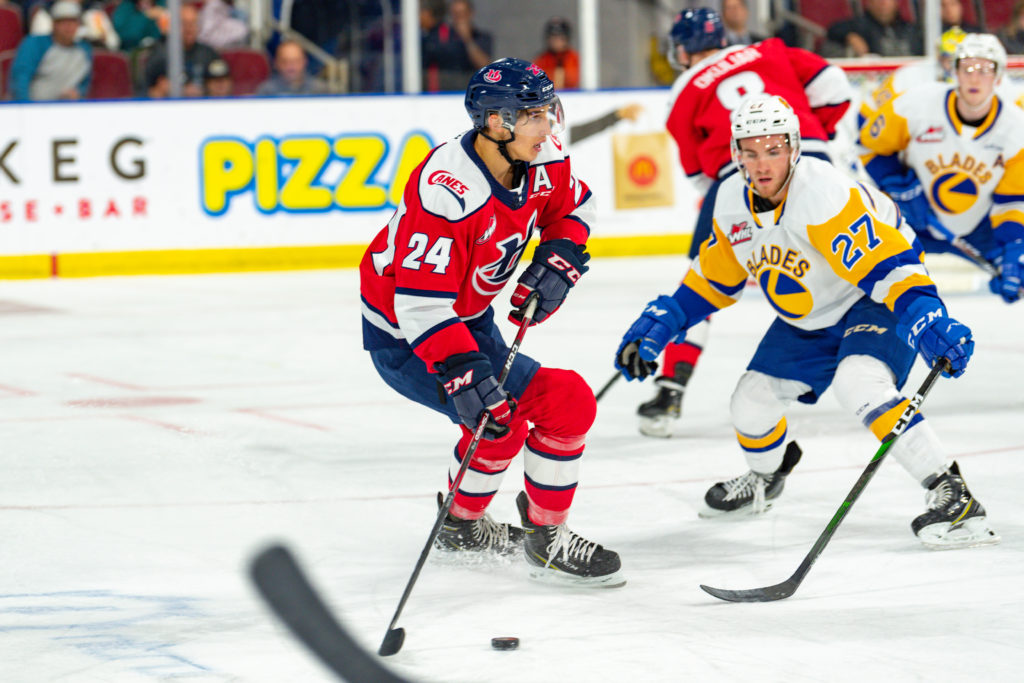 Saskatoon, SK – The Lethbridge Hurricanes returned to the win column on Saturday night as they earned a 4-3 win over the Saskatoon Blades at SaskTel Centre.

It was a fast-paced first period that saw chances galore for both sides. Saskatoon opened the scoring when Kyle Crnkovic deflected a centering pass from Martin Fasko-Rudas to make it 1-0 just 5:51 into the game. Carl Tetachuk – who earned his second straight start – made a sensational save with the glove on Zach Huber to keep the game a one-goal contest. The ‘Canes pulled even late in the first period with a power play goal by Brett Davis who ripped home his 13th goal of the year to make it 1-1 after twenty minutes. Saskatoon led the shots on goal 10-6 in the opening frame.

The ‘Canes struck quickly into the second period when Logan Barlage ripped home his 18th goal of the season to make it 2-1 Lethbridge; Justin Hall and Zack Stringer earned the assists. The Hurricanes tallied their league-leading 11th shorthanded goal when Davis snapped home his second of the game at the 6:25 mark to make it 3-1. Lethbridge scored a fourth unanswered goal when Koletrane Wilson let fly with a floater that beat Nolan Maier to make it 4-1; Ty Prefontaine and Ty Nash were credited with the assists o the goal. Before the period was out, the Blades cut the ‘Canes lead in half with a bank-in goal by Crnkovic for his second of the game to make it 4-2 after forty minutes of play.

In the third period, the Hurricanes killed an early penalty but right as the penalty expired the Blades struck on a two-on-one as Colton Dach finished his eighth goal of the season just 1:30 into the period to make it a one-goal game. Saskatoon continued to push for a game-tying goal with their best chance coming on a Riley McKay breakaway but Tetachuk stood tall to preserve the 4-3 lead. Saskatoon pulled their goaltender for the extra attacker but was unable to tie the game as the ‘Canes hung on to the 4-3 win ending a five-game losing streak against Saskatoon.

Shots in the third period favoured the Blades 9-5 as they outshot the Hurricanes 29-21 in the contest. Lethbridge went 1/5 on the power play while going a perfect 6/6 on the penalty kill.

The win for the Hurricanes improves their record to 4-2-0-0 in the first six games of seven-straight away from home while they earn their league-leading 17th road win of the year improving to 17-7-0-1 on the campaign. The ‘Canes improve to 30-12-2-5 on the season as it is the fifth straight season the Hurricanes have reached the 30-win plateau.

The Hurricanes end a seven-game road stretch on Wednesday in Red Deer against the Rebels. The ‘Canes will be back at the ENMAX Centre on Saturday, February 8th when they welcome the Prince Albert Raiders. Tickets can be purchased online at www.enmaxcentre.ca, by calling 403-329-SEAT (7328) or by visiting the ENMAX Centre Ticket Centre.