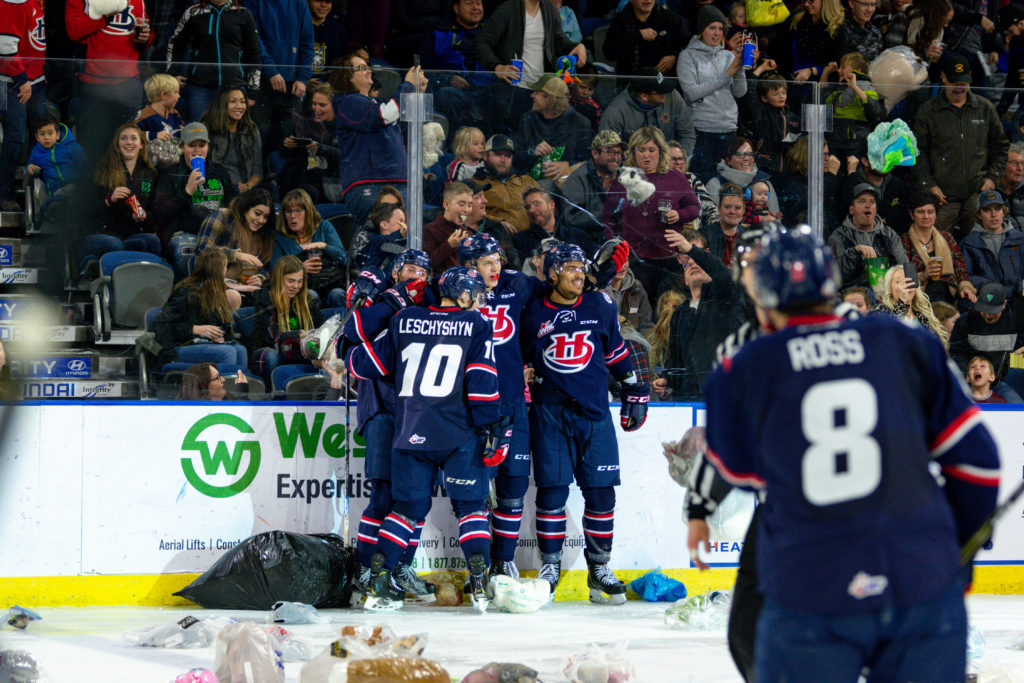 Lethbridge, AB – The Lethbridge Hurricanes welcomed the Swift Current Broncos on Friday to begin a three-in-three weekend on Teddy Bear Toss night at the ENMAX Centre in front of a sellout crowd.

Newcomers Jake Leschshyn and Nick Henry made their Hurricanes debut on Friday night skating on a line with Jordy Bellerive. The ‘Canes had a great start to the game as they peppered the Broncos netminder Joel Hofer early but could not solve him to unleash the bears. The best chance to open the scoring came courtesy of Leschyshyn who backhanded a puck through the crease and out the other side. Despite some good looks in the first period, the ‘Canes and Broncos skated to a scoreless first period. Shots favoured the Hurricanes 16-9 in the period.

The Hurricanes broke through and opened the scoring as Justin Hall scored his first goal in the WHL on a breakaway at the 4:07 mark as he sent the bears flying as the ‘Canes made it 1-0; Leschyshyn and Danila Palivko picked up the assists on the goal. After the Broncos tied the game on a goal by Max Patterson, the ‘Canes pulled back ahead as Zach Cox snapped home his ninth of the season on a two-on-one to make it 2-1; Justin Hall and Nolan Jones picked up the helpers as the ‘Canes had a one goal lead after forty minutes.

In the third, the ‘Canes outshot the Broncos 14-9 and added insurance as Jake Elmer potted his 12th goal of the season at the 6:38 mark to make it 3-1; Dylan Cozens and Koletrane Wilson assisted on the goal. The ‘Canes had a few more good scoring chances but couldn’t add anymore as they skated to the victory.

Final shots favoured the Hurricanes 42-26 in the hockey game. Lethbridge went 0/4 on the power play while going 2/2 on the penalty kill.

The Hurricanes will continue their three-on-three weekend on Saturday in Medicine Hat against the Tigers before welcoming the Red Deer Rebels on Sunday at the ENMAX Centre. Tickets for Sunday’s game can be purchased online at www.enmaxcentre.ca, by calling 403-329-SEAT (7328) or by visiting the ENMAX Centre Ticket Centre.