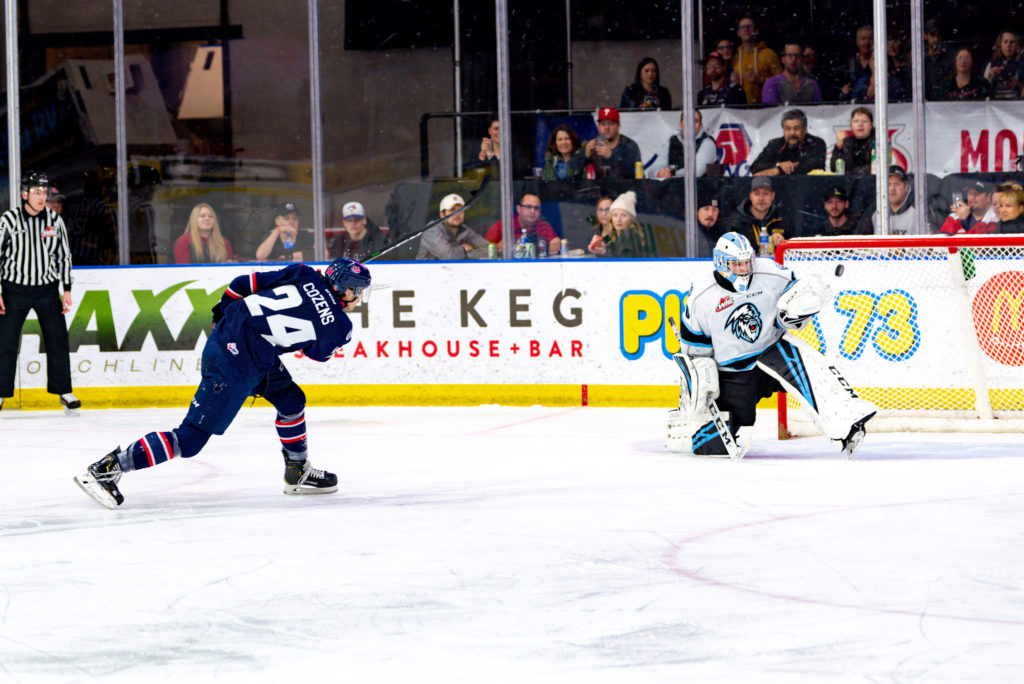 Lethbridge, AB – The Lethbridge Hurricanes returned to the ENMAX Centre on Friday for the first of six of their next seven at home and the ‘Canes earned a 5-4 win over the Winnipeg ICE in front of 4,027.

The Hurricanes and ICE skated to a fast-paced first period. Winnipeg opened the scoring on a five-on-three power play when Michael Teply scored his team-leading 25th goal of the year at the 11:17 mark adding to his WHL-leading rookie point total to make it 1-0 ICE. The Hurricanes answered just 15 seconds after the Winnipeg goal as Dylan Cozens scored his fourth shorthanded goal of the season – and the 13th shorty of the year for the ‘Canes – on a breakaway to tie the game 1-1. Cozens struck again just 1:27 later scoring his 31st goal of the year to make it 2-1 Lethbridge after twenty minutes of play. The ‘Canes outshot the ICE 13-6 in the first period.

In the second period, the Hurricanes added to their lead in the opening minute as Dino Kambeitz deked Winnipeg goaltender Liam Hughes before sliding home his 14th goal of the season to make it 3-1 Lethbridge; Ty Prefontaine earned the only assist on the goal. The ‘Canes – while shorthanded – were issued a penalty shot awarded to Cozens but he was stopped by Hughes as the Lethbridge held a 3-1 lead after two periods. Shots were even 10-10 in the middle frame.

It was a wild third period that saw the teams combine for five goals in the final twenty minutes. Lethbridge struck on the power play at the 2:24 mark when Alex Cotton ripped home his 18th goal of the season to make it 4-1; Cozens and Calen Addison earned the assists on the goal. Winnipeg tallied twice in a span of 1:05 as Teply scored his second of the night before Cole Muir pulled the ICE to within a goal to make it 4-3 with 9:55 to go in the game. Cozens completed his fifth career hat-trick at the 15:28 mark as he beat Hughes five-hole to make it a 5-3 game. Winnipeg pulled the goaltender for the extra attacker and Owen Pederson shelfed his 21st goal of the year to once again pull the ICE to within one but that was as close as they would come as the Hurricanes hung on to a 5-4 victory.

Shots in the third period favoured the ICE 10-7, but the ‘Canes had the edge in the game 30-26. Lethbridge and Winnipeg both went 1/5 on the power play.

The Hurricanes once again welcome the Winnipeg ICE on Saturday at 7:00pm at the ENMAX Centre. Tickets can be purchased online at www.enmaxcentre.ca, by calling 403-329-SEAT (7328) or by visiting the ENMAX Centre Ticket Centre.