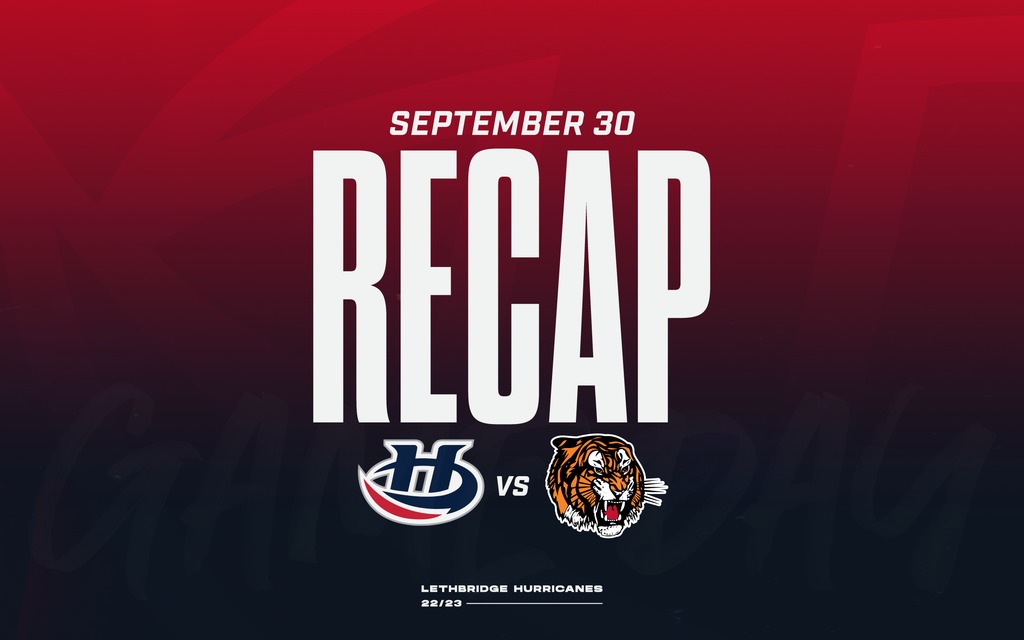 Lethbridge, AB – The Lethbridge Hurricanes answered back on Friday as they rebounded with a 5-4 victory over the Medicine Hat Tigers at the ENMAX Centre in the Dairy Queen Home Opener.

Newcomers Tyson Zimmer and Cole Shepard made their Hurricanes debut in the contest, and both factored in on the scoring in their first games of the season.

It didn’t take long for the fireworks to start after the player introductions. Medicine Hat struck first on a four-on-three power play just 1:44 into the game as Brendan Lee buried a one-timer to give the Tigers and early advantage. Lethbridge tied the game just under seven minutes later when Jett Jones banged home a rebound for his first of the season to make it 1-1; Tyson Laventure and Logan McCutcheon earned the assists on the goal. The ‘Canes pulled ahead with a power play goal of their own when Noah Chadwick ripped home his first of the year with a slapshot from the point to make it 2-1; Zimmer and Joe Arntsen picked up the helpers on the goal. Before the period was out, the Tigers equalized as Andrew Basha knocked home a puck in the air to make it 2-2 with just 11-seconds remaining in the opening frame. Lethbridge outshot Medicine Hat 12-10 in the first period.

The two teams traded chances in the second period with the Tigers outshooting the Hurricanes 11-8. Lethbridge had four power play chances in the middle frame but couldn’t strike on the man advantage. The Hurricanes pulled ahead for the second time when Nolan Bentham finished a four-way passing play to give Lethbridge a 3-2 advantage; Alex Thacker and McCutcheon drew the assists on the goal. The Tigers had a few good chances to draw even before the period was out but Jared Picklyk – who made 30-saves in the victory – stood tall turning aside every shot he faced in the period.

Lethbridge started the third period on a power play and made good just 40-seconds in to make it 4-2 as Shepard snapped home his first as a Hurricane; Thacker and McCutcheon once again earned the helpers on the tally. The ‘Canes added to their lead just under five-minutes later when Jones buried his second of the night for his sixth career multi-goal effort to make it 5-2. The Tigers, however, continued to press and cut the lead to 5-3 when Oasiz Wiesblatt scored his third goal of the season on a power play. Medicine Hat pulled the goaltender and made it a one-goal game with just 29-seconds remaining when Tyler MacKenzie pounced on a loose puck and made it 5-4. The Tigers once again pulled the goaltender but were unable to find an equalizer as the ‘Canes hung on for the 5-4 victory.

Lethbridge was outshot 13-7 in the third period and 34-27 in the game by Medicine Hat. The Hurricanes and Tigers were both 2-for-6 with the power play in the contest.

The victory for the Hurricanes evened their overall record to 1-1-0-0 on the young season as they earned their seventh-straight victory on home-ice against the Tigers. Lethbridge improved to 21-12-0-1 with two ties in their 36 home openers, with 13 of those wins coming against Medicine Hat.

The Hurricanes embark on a three-game road trip starting Tuesday in Saskatoon against the Blades. Lethbridge will visit Saskatoon, Prince Albert and Red Deer before returning to the ENMAX Centre next Saturday when they welcome the Raiders at 7:00pm.