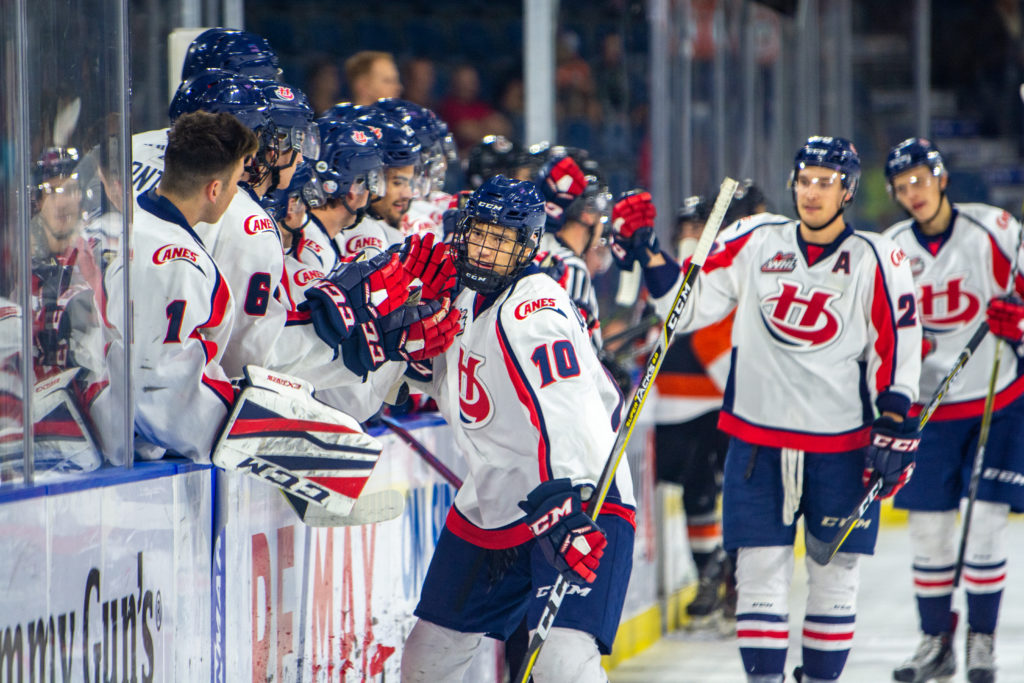 Lethbridge, AB – The Lethbridge Hurricanes began their ENMAX Pre-Season schedule on Friday with a 5-4 overtime victory over the Medicine Hat Tigers in front of 1,204 at the ENMAX Centre.

The Tigers opened the scoring 2:19 into the hockey game when Corson Hopwo redirected a Brayden Kapty point shot passed Reece Klassen to make it 1-0 Medicine Hat. The Hurricanes tied the game at the 10:14 mark as Nick Dorrington, who signed with the Hurricanes earlier this week, tipped one by Mads Sogaard to make it 1-1. The ‘Canes pulled ahead when Jordy Bellerive scored his first of two in the game with 1:49 left in the opening frame to make it 2-1 Lethbridge; Keltie Jeri-Leon earned the lone assist on the power play goal. Shots in the first period favoured the ‘Canes 13-5.

Lethbridge added to their lead 7:18 into the second period with another power play goal as Jake Elmer banked one home on the power play to make it 3-1 ‘Canes; Alex Cotton and Jeri-Leon earned the helpers. At the 9:37 mark, both teams switched goaltenders as Carl Tetachuk replaced Klassen who allowed one goal on 11 shots while Kaeden Lane relieved Sogaard who allowed three goals on 16 shots. The Tigers would equalize the game with a pair of power play goals 16 seconds apart as Cole Sillinger struck at the 17:05 mark before Dawson Heathcote talled at 17:21. Tigers outshot the ‘Canes 14-8 in the middle frame.

The teams traded third period goals as Jeri-Leon scored his first of the pre-season at the 3:22 mark to put the ‘Canes back ahead 4-3; Jadon Joseph earned the lone assist on the go-ahead goal. The Tigers once again tied the game as Kadyn Chabot beat Tetachuk five-hole on a breakaway out of the penalty box at 13:43. Shots in the third period favoured the ‘Canes 15-6 in the third period.

It didn’t take long for the Hurricanes to win the game as Bellerive tucked home his second of the game just 24 seconds into the overtime period; Igor Merezhko picked up the lone assist as the ‘Canes earned a 5-4 overtime win. Final shots favoured the Hurricanes 38-25 in the game.

The Hurricanes went 3/4 on the power play while Medicine Hat was 2/7 with the extra man.

Statement from the Canadian Hockey League
7 days ago