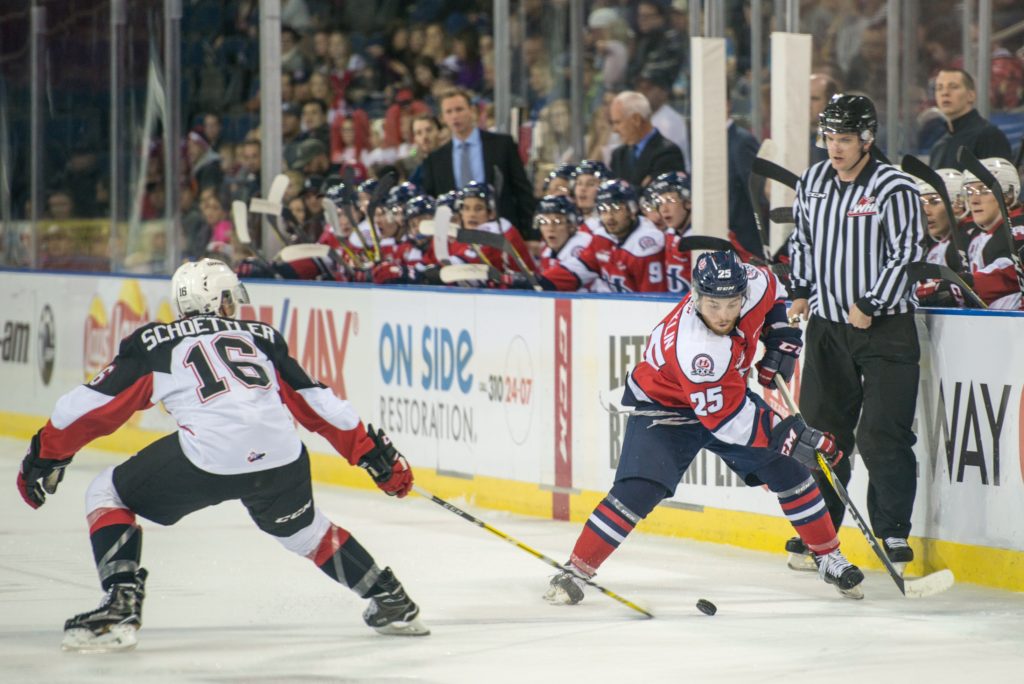 Lethbridge, AB – The Lethbridge Hurricanes kicked off a brief two game home stand on Friday night against the league-leading Prince George Cougars in hopes of snapping a five game losing streak but the Cougars stymied the ‘Canes offense en route to a 2-1 road victory.

The Hurricanes played a strong game, especially in the second half, but could not break through and find the net. Lethbridge hit three goal posts in the contest and had many great scoring chances but a hot goaltender in Ty Edmonds held the ‘Canes at bay.

The Cougars jumped out to an early 1-0 lead at the 3:51 mark as Jansen Harkins netted his fourth goal of the season on a partial two-on-one as he beat Stuart Skinner with a shot over the blocker. The Hurricanes equalized at the 9:21 mark as Giorgio Estephan scored his fourth of the season on a power play to make it 1-1 – Brayden Burke and Brennan Menell picked up the assists on the play. Late in the first period, the Cougars re-took the lead on an ugly goal that pinballed by Skinner to make it 2-1 Prince George – Bartek Bison was credited with the goal. The Cougars held the edge in shots 13-7 in the first period.

It was an even second period that saw the Cougars outshoot the Hurricanes 9-7 in the middle frame. Both teams had some chances on the power play. The ‘Canes had two chances with the extra man but failed to beat Edmonds. Prince George had a lengthy chance on a five-on-three power play late in the period for 1:47 but the ‘Canes had a large kill keeping the Cougars at bay. The score favoured the Cougars 2-1 after forty minutes of play.

The ‘Canes built on the momentum garnered off of the five-on-three kill as they had one of their best period in recent games outshooting the Cougars 16-6 in the final twenty minutes. The ‘Canes had a handful of power play chances, including a five-on-three of their own, but could not solve Edmonds who stood tall making some great saves. The ‘Canes also hit a pair of goal posts in the third period but could get the puck luck required to break through and tie the game as the Cougars went on to the 2-1 victory.

The Hurricanes have now lost six straight games and have only generated one goal in each of their last four games, however, the ‘Canes played the best game in recent weeks despite the defeat. The ‘Canes are back in action on Saturday night when they host the Red Deer Rebels at 7:00pm in the B93 Halloween  Howler.

Tickets are available for Saturday’s game online, by calling 403-329-SEAT (7328) or by visiting the ENMAX Centre or Yates Ticket Centres.