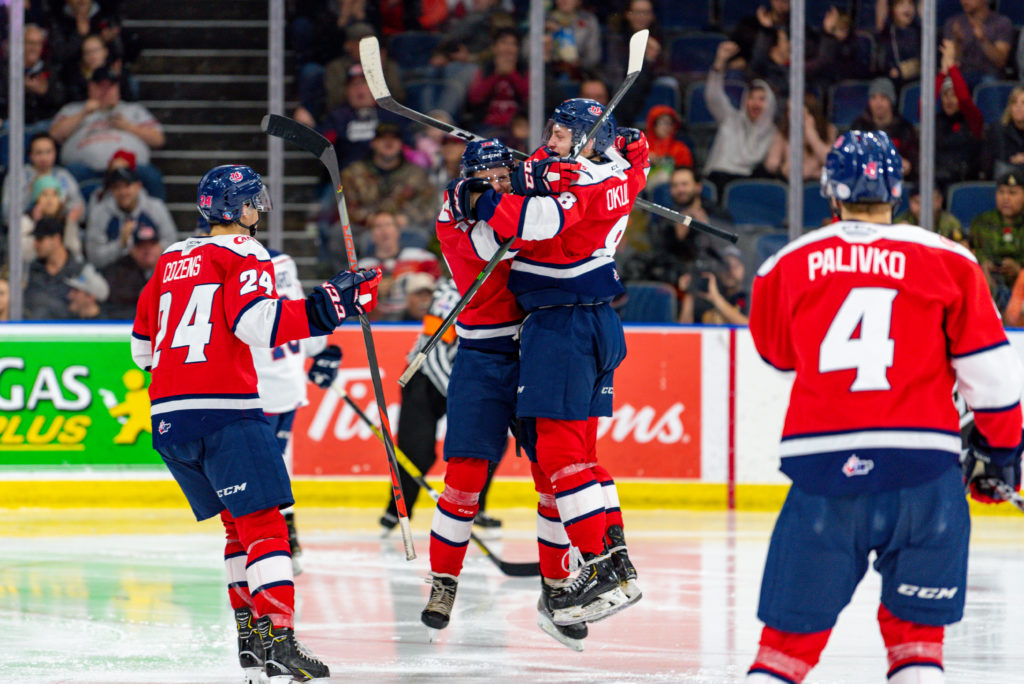 Lethbridge, AB – The Lethbridge Hurricanes ended a three-game homestand on Saturday with a 3-2 loss to the Tri-City Americans at the ENMAX Centre.

The Hurricanes picked up where they left off on Friday night as they were dominant in the first period outshooting the Americans 19-4. Despite the strong first period, the ‘Canes trailed 1-0 after twenty minutes as the lone goal came from Tri-City captain Kyle Olson who beat Bryan Thomson just 4:19 into the game. The ‘Canes had a few good chances to beat the Americans’ goaltender Talyn Boyko including an Alex Cotton goal-post but the Hurricanes could solve the Tri-City goaltender.

Tri-City started the second period on a power play and they made good on their opportunity as Edge Lambert backhanded home a rebound for his fourth goal of the season to make it 2-0 Americans just 46 seconds into the period. The goal was the end of the night for Thomson was allowed two goals on six shots as he was replaced by Carl Tetachuk who stopped all four shots he saw in the second period. The ‘Canes appeared to get on the board with a power play goal by Justin Hall with 3:23 left in the period, but after a video review, the goal was waved off due to a kicking motion in the crease as Tri-City led 2-0 after forty minutes despite being outshot 33-10 through two periods.

It didn’t take long for the Hurricanes to get on the board in the third period as D-Jay Jerome slammed home his ninth goal of the season on a turnaround slapshot just 17 seconds into the period to cut the Tri-City lead in half; Danila Palivko and Oliver Okuliar earned the assists as Okuliar extends his point-scoring streak to 11-straight games. The ‘Canes tied the game with a power play goal by Alex Cotton who rifled home his sixth of the year to tie the game 2-2. Tri-City once again pulled ahead as Sasha Mutala beat Tetachuk on a sharp-angle shot to give the Americans a 3-2 lead. The Hurricanes pulled the goaltender for the extra attacker to tie the game but Cotton hit the goal post before time ran out as Tri-City hung on to the 3-2 win.

The Hurricanes outshot the Americans 16-6 in the third period and 49-16 in the game. Lethbridge went 1/7 on the power play while Tri-City was 1/1 with the extra man.

The loss for the Hurricanes was their first regulation loss since October 12th in Saskatoon against the Blades as their 12-game point streak comes to an end with the defeat. The ‘Canes record falls to 6-3-0-2 at the ENMAX Centre and 13-5-0-3 on the season.

The Hurricanes begin a three-game road trip next Friday in Victoria against the Royals. The ‘Canes will return to the ENMAX Centre on Friday, November 22nd against the Prince Albert Raiders. Tickets can be purchased online at www.enmaxcentre.ca, by calling 403-329-SEAT (7328) or by visiting the ENMAX Centre Ticket Centre.