Hurricanes Edged 4-3 in Overtime by Warriors 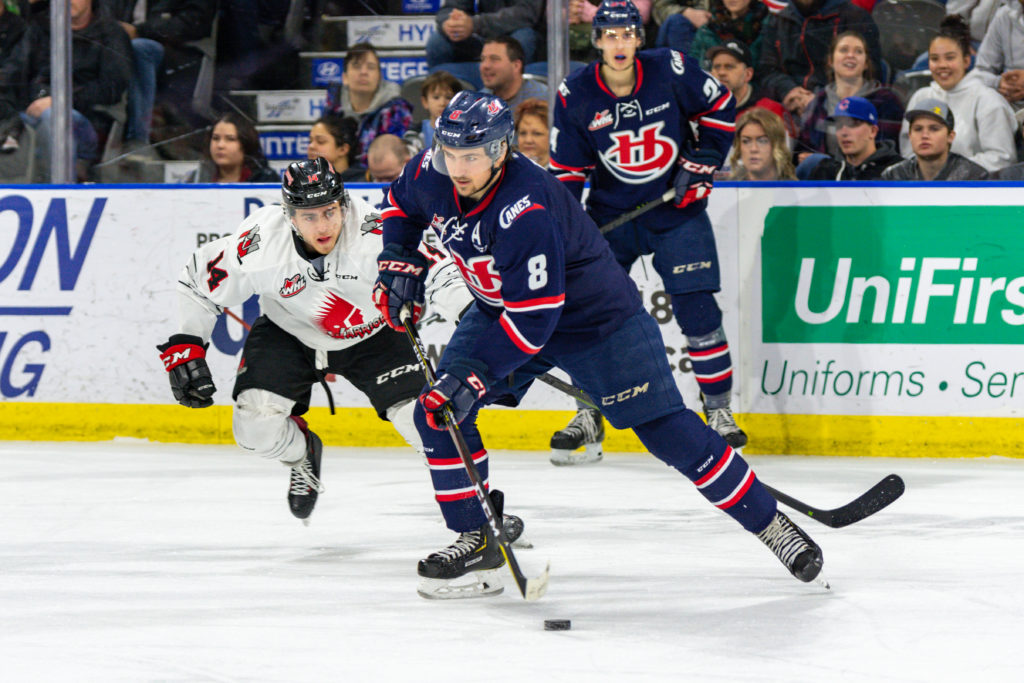 Lethbridge, AB – The Lethbridge Hurricanes began a two-game weekend on Friday with a 4-3 overtime loss to the Moose Jaw Warriors at the ENMAX Centre.

The Hurricanes had a strong first period as they outshot the Warriors 21-8 in the opening frame. The ‘Canes opened the scoring at the 5:20 mark as Jake Elmer banged home a loose puck in front of the net to make it 1-0; Justin Hall and Alex Cotton earned the helpers on the goal. Moose Jaw tied the game on a power play goal by Josh Brook but just 31 seconds later Calen Addison beat Brodan Salmond with a slapshot from the blueline to put the ‘Canes back ahead 2-1; Elmer and Logan Barlage picked up the assists on the go-ahead goal as the Hurricanes led after twenty minutes of play.

The Hurricanes started the second period on a power play and it took just 19 seconds for them to capitalize as Taylor Ross potted his 25th of the season to make it 3-1; Elmer and Addison were credited with the assists. The Warriors cut the lead in half with a power play goal of their own as Justin Almeida ripped home his 22nd goal of the season at the 6:38 mark. After killing a five-on-three power play against, Moose Jaw moments later struck to tie the game on yet another power play goal by Almeida making it a 3-3 game. The ‘Canes peppered the Warriors in shots again in the second period 17-8 as Lethbridge held the edge 38-16 through two periods despite the game being tied.

In the third period, the Hurricanes outshot the Warriors 12-8 in the period but could not solve Salmond who stood tall. After no-one scored in the final twenty minutes, the game went to overtime and it didn’t take long to get a winner Brook, on a delayed penalty, snapped one by Carl Tetachuk just 35 seconds into the extra frame to give Moose Jaw a come-from-behind victory.

Final shots in the game favoured the Hurricanes 50-25. Lethbridge went 1/5 on the power play while Moose Jaw was 3/3 with the extra man.

The loss for the Hurricanes drops their record to 2-0-1-1 on this six-game homestand thus far. Lethbridge falls to 27-15-5-5 on the season as they earn a single point and pull to within one of the Central Division leading Edmonton Oil Kings.

The Hurricanes will return to action on Saturday when they welcome the Prince Albert Raiders to the ENMAX Centre at 7:00pm. Tickets can be purchased online at www.enmaxcentre.ca, by calling 403-329-SEAT (7328) or by visiting the ENMAX Centre Ticket Centre.