Hurricanes Edged in OT by Broncos 5-4 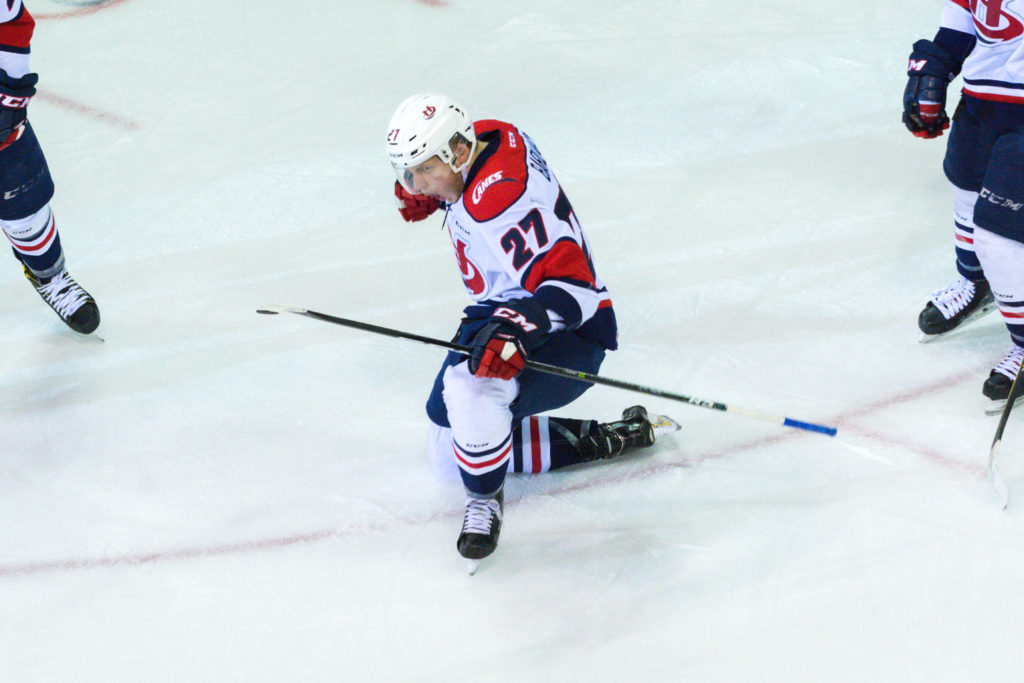 Swift Current, SK – The Lethbridge Hurricanes were handed a 5-4 overtime loss on Friday in Swift Current to the Broncos at the Innovation Credit Union i-Plex.

The Hurricanes were on their heels early in the game as the Broncos had a pair of power play opportunities early in the game as Koletrane Wilson was handed two penalties four minutes apart but Swift Current was unable to open the scoring despite outshooting the ‘Canes 7-1 early in the game. The ‘Canes got the first goal of the game at the 11:12 as Calen Addison jumped up into the rush and snapped home his third goal of the season to make it 1-0; Taylor Ross and Wilson earned the assists on the goal. Lethbridge made it 2-0 as Noah Boyko scored his third of the season on a nice individual play before ripping it over the glove the Bronco netminder Joel Hofer. Before the period was out though, Max Patterson would redirect a Connor Horning point shot passed Reece Klassen to make it 2-1 after twenty minutes of play. Shots in the first period favoured the Hurricanes 13-12.

The teams traded goals in the middle frame just 1:03 apart. Jadon Joseph extended his point scoring streak to 10 straight games as he had a puck bounce off him and into the net to make it 3-1 Lethbridge with a power play goal at the 12:33 mark; Logan Barlage and Calen Addison picked up the assists on the goal. Swift Current pulled back to within one as Andrew Fyten buried his third of the season off the rush beating Klassen over the blocker to make it 3-2 after forty minutes of play. Broncos outshot the ‘Canes 16-12 in the second stanza.

The Hurricanes peppered Hofer early in the third period as they registered 12 shots in the first ten minutes but the Broncos goaltender stood tall keeping it a 3-2 hockey game. The Broncos pulled even at 3-3 as Ben King buried a rebound passed Klassen to make a tie game at the 11:13 mark. The ‘Canes retook the lead with 2:46 left in the game as Ty Kolle scored his fourth goal of the season on a power play to give Lethbridge a 4-3 lead; Barlage and Igor Merezhko picked up the helpers. However, Swift Current tied with 25 seconds left as Horning beat Klassen with a point shot to make it a 4-4 game with a power play and an extra attacker. Hurricanes outshot the Broncos 18-12 in the third period.

In overtime, the ‘Canes outshot the Broncos 3-2 but it was Noah King who won the game on a three-on-two in the extra frame giving Swift Current their second win of the season.

Final shots favoured the Hurricanes 46-40 in the game. Lethbridge went 2/4 on the power play while the Broncos were 1/4 with the extra man.

The loss for the ‘Canes was their second straight as they fall to 7-5-2-2 on the season.

The Hurricanes will be back at the ENMAX Centre on Friday, November 9th when they welcome the Calgary Hitmen at 7:00pm. Tickets are available online, by calling 403-329-SEAT (7328) or by visiting the ENMAX Centre and Yates Ticket Centre’s.