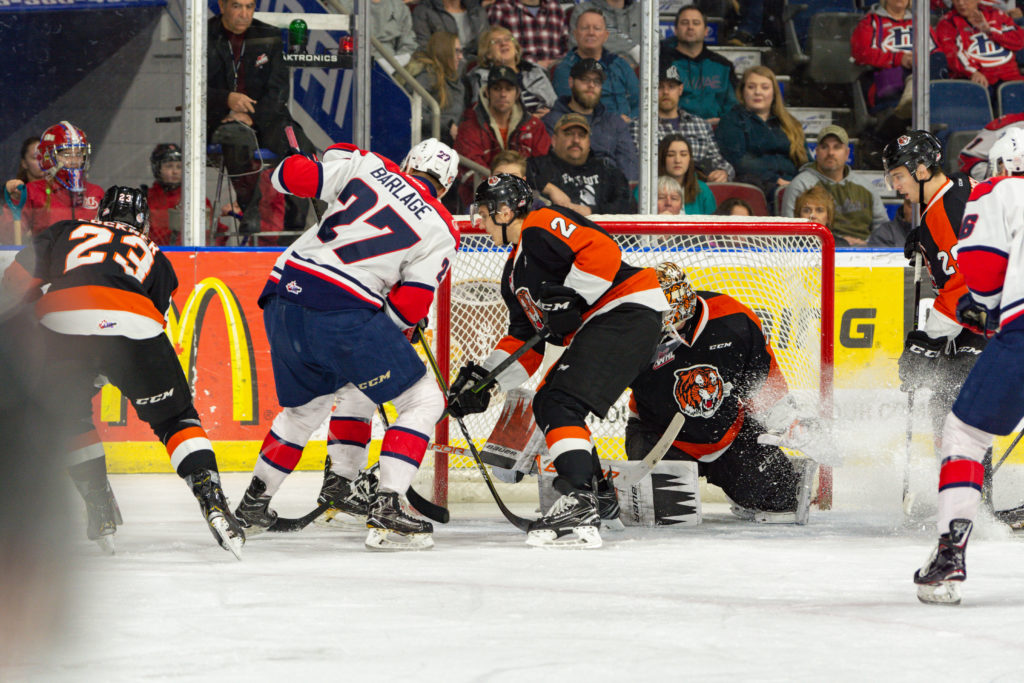 Medicine Hat, AB – The Lethbridge Hurricanes played their final regular season game on Saturday as they earned a 3-2 win over the Medicine Hat Tigers to head into the WHL Playoffs on a season-best eight game winning streak.

It was a fast-paced first period that saw both teams get chances to open the scoring by Hurricanes goaltender Bryan Thomson and Tigers netminder Jordan Hollett were solid early. The ‘Canes had some good chances to open the scoring on a power play but could not solve the goaltender. Medicine Hat, on a power play of their own, scored first at the 17:48 mark as Brett Kemp scored his 33rd goal of the year to make it 1-0. The ‘Canes pulled back even with just 21 seconds left in the period as Nick Henry scored his 28th of the season fooling Hollett with a long-range shot to make it 1-1 after twenty minutes of play; Jake Leschyshyn and Nolan Jones earned the assists on the goal. Tigers outshot the Hurricanes 13-9 in the first period.

The Hurricanes pulled ahead early in the second period as Henry scored his second of the game at the 5:58 mark with a slapshot from the right boards to make it 2-1 Lethbridge; Taylor Ross and Jake Elmer earned the assists as Elmer extended his point-scoring streak to 18-straight games. Elmer added yet another goal, his 39th of the season, at the 10:55 mark as he scored his WHL-leading seventh shorthanded goal of the year to give the Hurricanes a 3-1 lead after forty minutes of play. The ‘Canes outshot the Tigers 17-10.

In the third period, the Tigers started with a power play but were unable to capitalize with the extra man as the ‘Canes remained in front by the 3-1 score. The Hurricanes continued to press to build upon their lead by Hollett stood tall with his best save on Jordy Bellerive. The Tigers pulled to within one as Ryan Jevne snapped home his 32nd goal of the season to make it 3-2 but that was as close as Medicine Hat came as the Hurricanes hung on to the 3-2 victory.

Final shots in the game favoured the Hurricanes 32-31. Lethbridge went 0/4 on the power play and 3/4 on the penalty kill.

The win for the Hurricanes was their eighth straight victory to end the regular season as they improved to 40-18-5-5 on the season. It’s the seventh time in their franchise history that the ‘Canes have reached the 40-win mark, and third time in four years under head coach Brent Kisio as he becomes the only head coach in ‘Canes history to record 40-or-more wins in three separate seasons.

The ‘Canes will be back at the ENMAX Centre for Game 1 of the WHL Playoffs. Individual game tickets for the first round will be available for purchase on Wednesday, March 20th at 9:00am. They can be purchased online at www.enmaxcentre.ca, by calling 403-329-SEAT (7328) or by visiting the ENMAX Centre Ticket Centre.